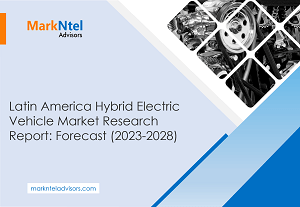 Hybrid Vehicles are powered both by an ICE (Internal Combustion Engine) and one or more electric motors that consume energy stored in batteries. They combine the benefits of high fuel economy & low tailpipe emissions, along with the power & range of conventional vehicles. In order to curb the harmful emissions released from fossil fuel-based vehicles, hybrid vehicles are being increasingly manufactured in several regions worldwide for both passenger & commercial purposes.

The Latin America Hybrid Electric Vehicle Market is projected to grow at a CAGR of around 6% during the forecast period, i.e., 2023-28. It owes to the rising prices of fossil fuels and increasing number of stringent emission norms being imposed by governments of various countries worldwide. The prices of conventional fuels have been increasing year-on-year due to declining number of crude oil & natural gas reserves.

The same aspect has increased concerns among governments & automotive OEMs to find a cost-efficient & sustainable alternative to fossil fuel-based vehicles. As a result, automakers are increasingly manufacturing hybrid vehicles in order to reduce the alarming levels of harmful carbon emissions, and address the ever-rising fossil fuel prices. In addition, the launch of incentive schemes by governments of countries like Brazil, Mexico, & Columbia is also contributing to the surging sales of hybrid vehicles across Latin America.

These automakers are offering a wide range of fuel-efficient hybrid vehicles with advanced features, which, in turn, is attracting more & more customers across the country, thereby stimulating the overall expansion of the hybrid vehicle market in Latin America.

Due to the ongoing research and development in hybrid vehicles, automakers are actively focusing on finding innovative solutions to reduce carbon emissions. OEM’s like Stellantis and CAOA are into the development of hybrid vehicles based on ethanol & electric motors in order to lower emission levels to much more extent. In 2022 CAOA launched five new models – four ethanol-based hybrids and one fully electric model in Brazil. This trend is projected to bode well for the Latin America Hybrid Electric Vehicle Market in the coming years.

Based on Propulsion Type:

Of these three, HEVs (Hybrid Electric Vehicles) are estimated to hold a considerable market share during 2023-28, owing mainly to their lower ownership costs than their counterparts. The other vehicle types like PHEVs (Plug-in Hybrid Vehicles) and fully electric vehicles available in the market have higher costs owing to the high degree of product hybridization. Additionally, the lack of charging stations across the region would further increase HEV sales in the future as these vehicles could recharge their batteries by themselves using the regenerative braking systems, wherein energy lost during braking gets utilized at a later stage to charge the batteries. Hence, HEVs are expected to witness the fastest growing sales in Latin America during the forecast period on account of the lack of inconvenience associated with finding charging stations & spending additional time powering up.

Based on Electric Powertrain Type:

Here, parallel hybrid is projected to attain a considerable market share, owing primarily to the growing deployment of regenerative breaking technology in vehicles, which restores the energy of the battery at the time of breaking and thus eliminated the need for external charging infrastructure. In addition, parallel hybrid vehicles provide high performance and also aid in efficient energy conservation while eliminating mechanical complexity when compared to other powertrain types. Hence, owing to the better performance and reduced dependence on charging infrastructures, the demand for parallel hybrid vehicles is estimated grow notably in Latin America over the coming years.

Based on Vehicle Type:

Of both, passenger cars acquired a significant share of the Latin America Hybrid Electric Vehicle Market. It owes to their growing demand for consumers to travel at shorter distances. Trucks & busses often travel long distances, which requires frequent charging, and with the limited availability of the EV charging infrastructure in Latin America, it restricts the demand for commercial hybrid vehicles. Moreover, automakers are increasingly focusing in hybridizing passenger vehicles owing to less production costs incurred than commercial vehicles, i.e., another aspect projected to augment the demand for passenger hybrid vehicles across Latin America in the coming years.

Of all countries, Mexico acquired a significant share of the Hybrid Vehicle Market across Latin America. It owes to the extensive presence of automakers like Diamler, Volvo, & Ford, which are increasingly manufacturing hybrid vehicles for both domestic & international markets. In addition, the surge in the disposable income of Mexicans, coupled with stringent government regulations for reducing carbon emission, are also promoting the sales of hybrid vehicles in the country.

More & more Mexican consumers are availing government incentives like exemption of local taxes & emission control verifications. In 2018, Mexico reported a 68% growth in EV sales, and hybrid vehicle sales compared with 2017 touched over 17,800 units. In addition, the increasing development of hybrid & electric vehicle charging infrastructure in the country is another prominent aspect projected to drive the Mexico Hybrid Vehicle Market through 2028.

Hybrid vehicle sales have been growing steadily in Latin America, mainly due to the imposition of strict emission-related norms by governments of countries like Brazil, Mexico, Chile etc., in order to lower CO2 emissions from the automotive sector. For instance, in 2022, the Brazilian government implemented PROCONVE L-7 and further announced the implementation of PROCONVE L-8 emission norms in 2025. These automotive emission norms extremely focus on lowering harmful gasses like carbon monoxide, hydrocarbons, nitrogen oxides, etc., from automotive due to which, the OEMs like Toyota, Volvo, and others across the region have been gradually shifting towards the manufacturing of hybrid electric vehicles.

According to the German automobile association (ADAC) the hybrid vehicles has been efficient in saving fuel consumption by 15-25%, eventually leading to a slowdown in the emission of harmful gasses. Additionally, consumers have been more comfortable with the adoption of hybrid vehicles owing to their fuel economy feature which would further drive the market during the forecast period.

A. The Latin America Hybrid Electric Vehicle Market is projected to grow at a CAGR of around 6% during 2023-28.

A. HEVs are anticipated to emerge as an opportunity area for the leading players in the Latin America Hybrid Electric Vehicle Market during the forecast period.

A. The implementation of stringent emission norms for the automotive sector is projected to drive the Latin America Hybrid Electric Vehicle Market through 2028.

A. Mexico is anticipated to dominate the Latin America Hybrid Electric Vehicle Market during 2023-28.