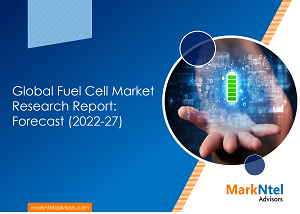 Fuel cells are devices that convert the chemical energy of hydrogen or other fuels to clean & efficient electrical energy. They can be utilized extensively in numerous applications across industries like automotive, power & utilities, industrial, commercial, residential, & wastewater treatment facilities, among others. Unlike conventional combustion-based technologies currently used in many power plants & vehicles, Fuel cells offer several benefits like higher efficiencies, lower or zero emissions, no air pollutants, and quiet during operation.

The Global Fuel Cell Market is expected to grow at a CAGR of around 28% during the forecast period, i.e., 2022-27. Most of the market expansion would be propelled by the mounting need for renewable energy sources owing to growing environmental concerns over rapid climate changes and the alarming levels of carbon emissions from various industries.

In view of this, governments of various countries are making massive investments in developing alternatives to fossil fuels and laying out favorable norms for companies to introduce green energy technologies, i.e., infusing the demand for fuel cells, which exhibit benefits like low-to-zero emissions, high efficiency & reliability, energy security, durability, scalability, and quiet operations.

Many fuel cell manufacturers are carrying out strategic partnerships & acquisitions to expand their operations by setting up new plants across different countries worldwide in order to cater to the mounting requirements for fuel cells in various applications, including data centers, hydrogen-based vehicles in transportation, and defense equipment.

Similar to EVs (Electric Vehicles), Fuel Cell Vehicles (FCVs) are powered by electric motors rather than ICEs (Internal Combustion Engines) and have no smog or GHG (Green House Gas) emissions. As more & more people are adopting green mobility in order to contribute to a sustainable future, the demand for fuel cells is rapidly burgeoning worldwide, i.e., creating lucrative prospects for manufacturers to expand their production & distribution capacities and boost the global fuel cell market in the future.

Data center operations are highly power-consuming as these systems require uninterrupted electricity to avoid or minimize the chances of data loss. As a result, many companies have started adopting sustainable alternatives to achieve cost savings, and fuel cells, particularly SOFC, have witnessed remarkable growth. Moreover, stationary & portable applications of SOFC are in high demand across the defense sector for noiseless & efficient power generation. These trends are creating new avenues for the Global Fuel Cell Market to expand at a significant growth rate over the coming years.

Of them all, PEM (Proton Exchange Membrane) fuel cells are expected to dominate the Global Fuel Cell Market during 2022-27. It attributes primarily to their mounting demand for long-haul transport & material handling equipment. PEM is the most established fuel cell technology that operates at a lower temperature and has a higher energy density & durability, low weight & volume, less refueling time, & more life cycles than its counterparts.

Here, the transportation application of fuel cells is expected to gain momentum and considerably contribute to the market expansion through 2027. It owes principally to the mounting demand for fuel-cell vehicles & forklifts globally, coupled with rigorous R&D activities being conducted by several countries toward developing hybrid vehicles powered by hydrogen fuel cells.

The fuel cell technology is a sustainable alternative to li-ion batteries & conventional ICEs that emit excessive greenhouse gases, which is why the demand for fuel cells is rapidly rising for transportation applications to achieve better energy conversion efficiencies. More & more countries are deploying fuel cell technology in their respective public transportation networks owing to its high performance & reduced refueling time.

Among all regions globally, Asia-Pacific is projected to dominate the Fuel Cell Market with the highest share during 2022-27. The regional market expansion would be seen largely in countries like China, Japan, & South Korea, mainly due to the favorable government policies & subsidies for developing cleaner energy sources, including fuel cells, the rapidly expanding hydrogen infrastructure, and the increasing production of FCVs for the transportation sector.

Besides, several automakers, in line with their carbon-zero targets, are joining forces toward developing fuel-cell vehicles across the region. Recently on 21st July 2022, Toyota announced collaborating with Hino Motors, Isuzu, & Commercial Japan Partnership Technologies Corporation to develop light-duty fuel cell electric trucks in Japan, scheduled for next year's launch. The global leader is well known for its hybrid & hydrogen fuel cell vehicles and is currently working on introducing battery-electric mini-commercial vehicles in 2023. Hence, such efforts by both governments and automotive companies are set to create new directions for the Asia-Pacific Fuel Cell Market to witness significant growth over the coming years.

In view of the current environmental situation and growing levels of carbon emissions, various government authorities worldwide are laying out favorable norms & subsidies to promote the use of clean energy technologies. As a result, the world is witnessing a burgeoning utilization of fuel cells in numerous applications, especially across the automotive & transportation sector, where hydrogen fuel-cell cars are gaining popularity across different regions globally. Automakers are actively working on eliminating the use of battery-based systems and shifting to fuel-cell technologies owing to benefits like greater energy storage density, lightweight, impressive power-to-weight ratio, & faster refueling, among others. Hence these aspects are creating a plethora of opportunities for manufacturers to expand their production capacities and introduce innovations in their product offerings, which, in turn, would drive the Global Fuel Cell Market during 2022-27.

Platinum & iridium are rare metals used as catalysts in fuel cell technology, which makes the initial costs of these cells significantly high. As a result, many companies have stopped investing in hydrogen fuel cell technology as the price of a unit of power from hydrogen fuel cells is higher than other energy sources available currently. Hence, the high prices of raw materials used in making fuel cells owing to their limited availability, as well as the expensive setup & maintenance, shall remain prominent growth restraints for the Global Fuel Cell Market during 2022-27.

A. The growing focus of many countries on adopting clean energy technologies to address the alarming levels of carbon emissions is the prime factor projected to drive the Global Fuel Cell Market during 2022-27. On the other hand, the high initial & maintenance costs of fuel cells would act as a major growth barrier to the fuel cell industry during the forecast period.

A. The transportation application of fuel cells would continue creating remunerative prospects for the key companies operating in the Global Fuel Cell Market during 2022-27.

A. Asia-Pacific is creating profitable prospects for the Fuel Cell Market to expand significantly during the forecast period. 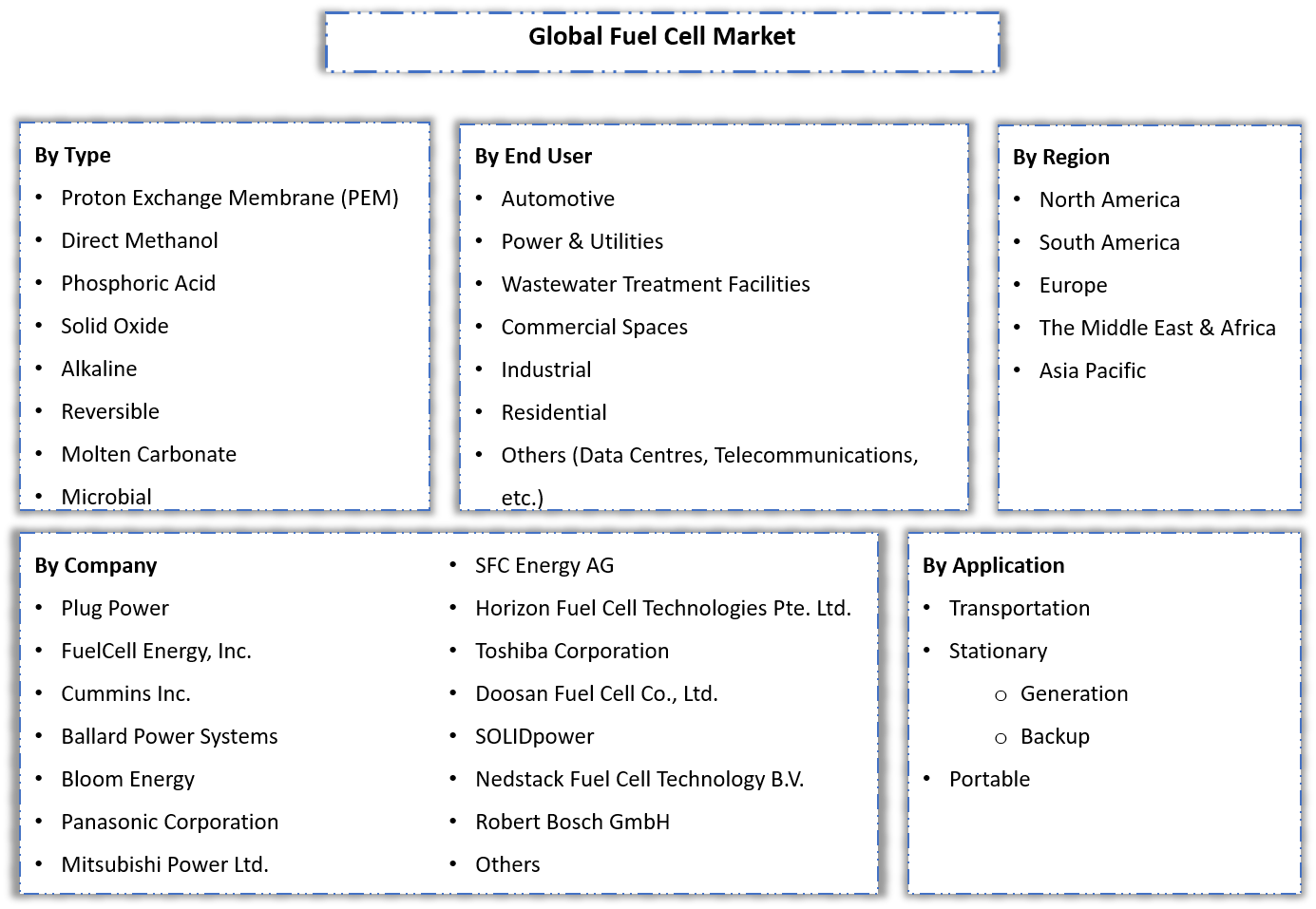