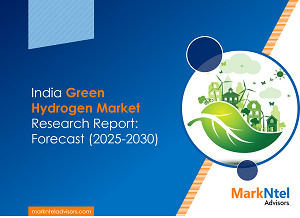 Hydrogen is a prominent source of energy and shares a long history, finding applications in different aspects, right from powering combustion engines years back to being an important part of the modern-day refining industry. It is a light, easy to store, and energy-dense element that does not directly generate emissions or affects greenhouse gases, but for it to become green & clean, hydrogen needs to find utilization in areas where its previous application has been entirely absent, like building, transportation, and power generation among others.

Green Hydrogen is nothing but hydrogen generated by splitting and separating oxygen from water using renewable electricity to expand the application. As the government of different countries, including India, are keenly focusing on exploring the potential of its use, green hydrogen is enjoying an unparalleled political & business momentum to scale technologies and reduce the cost of hydrogen, thereby expanding its utilization.

The India Green Hydrogen Market is projected to grow at a CAGR of almost 20% during the forecast period, i.e., 2025-30. The market will be driven by the rapidly escalating concerns of the government on the exponentially rising carbon emission and their focus on reducing its effects on the environment, thereby bringing sustainability. It, in turn, is augmenting the need to develop & utilize clean resources for various applications across industries and demonstrating greater inclination toward clean elements like green hydrogen.

Besides, with the growing need to bring energy efficiency & minimize dependency on fossil fuels, the government of India is supporting the green hydrogen industry substantially, viewing it as the solution to mitigate emissions while producing power. Moreover, conventional hydrogen has a prevalent role across different sectors in India, owing to which, its demand is quite high. Consequently, carbon emissions have been widespread across several cities in India.

Hence, more than any other country, India needs green hydrogen to minimize air pollution, reduce the financial burden from energy imports, and decarbonize the environment rapidly. Such aspects are generating growth opportunities for the stakeholders to invest substantially in the industry and expand their research, development, and production initiatives, backed by massive government support through favorable policies & funding, leading the overall market toward a substantial rise in the coming years. For Instance:

Here, industries like Petrochemicals are anticipated to make substantial contributions to the expansion of the India Green Hydrogen Market and generate lucrative opportunities for the leading companies during the forecast period. The growth attributes principally to the growing refining activities across the petroleum industry, demonstrating high utilization of hydrogen, thereby generating opportunities for cleaner alternatives like green hydrogen for desulphurization of products.

Besides, the presence of stringent government regulation to limit sulfur from petroleum products augment the demand for hydrogen, green hydrogen might project profitability in the industry and drive the market through 2030.

Moreover, as the ill effects of hydrogen are elevating substantially, the demand for green hydrogen in petrochemical applications is widening too. It is where the active participation of India to slash the production cost of green hydrogen and encourage industries like petrochemicals to access cheaper & cleaner energy would help bring the green hydrogen transition and expand the overall market in the future. For Instance:

Here, Alkaline Electrolyzer is anticipated to dominate the India Green Hydrogen Market with the largest share during the forecast period. It owes principally to the capabilities of this technology to offer longer operating hours than other technologies. It is backed by the use of alkaline liquid solutions containing potassium or sodium hydroxide as its electrolyte. Moreover, the problem with availability and mining of rare earth metals needed for the manufacturing for PEM electrolyzer automatically pushes the demand for alkaline electroyzer also adds up to its high demand, contributing to the overall market growth through 2030.

Besides, with the massive government support for the production of green hydrogen, several leading players are actively participating in the market and demonstrating mergers & acquisitions, partnerships, agreements, etc., for the development of advanced technology and testing the feasible capacity of the new energy has been contributing to the industry expansion. For Instance: