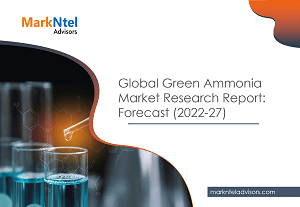 Ammonia, as a gas, exhibits widespread utility in producing agricultural fertilizers, however, comprises high carbon content. Hence, the agriculture industry, alongside others, is adopting alternative procedures for producing ammonia. With the massive pressure on the agriculture industry to feed the exponentially rising population, the sector is formally adopting numerous color codes associated with its development. Green ammonia production is the production of ammonia in a 100% renewable & carbon-free manner, where one way might include using hydrogen from water electrolysis & nitrogen separated from the air.

Besides, backed by the benefits of green ammonia, the industry's future is anticipated to be lucrative for different end-users & players. These perks include its easy storage in bulk as a liquid, making it an ideal chemical store for renewable energy. In addition, green ammonia can also be burnt in an engine or act as a fuel cell to generate electricity, demonstrating zero-carbon fuel. In fact, the maritime industry is anticipated to be an early adopter of these elements as a replacement for fuel oil in engines.

The Global Green Ammonia Market is projected to grow at a CAGR of around 54% during the forecast period, i.e., 2022-27. The market is driven by the gradual focus shift on reducing greenhouse gas (GHG) emissions & growing emphasis on the adoption of energy-efficient technologies in manufacturing ammonia.

As industries & people are becoming more conscious & shifting preferences toward sustainable products, the demand & utilization of green ammonia is swiftly gaining traction & is set to attain an opportunistic future across different locations.

Another prominent factor contributing to the significant growth of the market is its anticipated high demand in the maritime industry as an alternative to regular ocean fuel. This demand is set to witness an upsurge owing to the negligible sulfur content & zero greenhouse gas emissions capabilities of green ammonia, demonstrating itself as a reliable alternative in the industry.

Moreover, growing governmental & private expenditures & fast-falling cost of producing renewable power are the other aspects shaping the industry dynamics. It, in turn, is also generating lucrative opportunities for the leading players to increase their production & distribution capacities and cater to the burgeoning demands worldwide. For instance:

Besides, the advent of cutting-edge technologies paired with a sustainable source of energy in the extraction of hydrogen, resulting in the production of free ammonia, is also bolstering the market growth. In addition, an ampler growth prognosis for the Green Ammonia Industry can be expected owing to the widespread applications in end-use sectors, including power generation and transport.

Furthermore, the widespread acceptance of green ammonia in producing eco-friendly fertilizers scales up the market trajectory. With the considerable introduction of green hydrogen in a fossil-based ammonia plant & many upcoming multi-GW renewable ammonia plants already under construction, the Green Ammonia market shall observe substantial growth in the forthcoming years.

Here, the Solid Oxide Electrolysis (SOE) technology is expected to acquire the largest share of the Global Green Ammonia Market during the forecast period. This growth attributes to the active participation of the government through massive funding & various research & development initiatives for fuel cells, augmenting the demand for green ammonia.

Besides, the advent of several policies & frameworks imposed by the governments of different countries to mitigate carbon emissions and attain higher environmental sustainability are further boosting the production & utilization of green ammonia using SOE technology. It, in turn, is curating the fundamentals underlying the market dynamics through 2027.

On the other hand, the Alkaline Water Electrolysis(AWE) technology is likely to grow in the coming years due to the low capital expenditure involved in the system, as the catalyst used is relatively less expensive than the platinum metal group-based catalyst. Additionally, lesser dissolution of anodic catalyst and exchangeable electrolyte results in increased longevity, which in turn, is boosting its utilization and driving the market through 2027.

Among all, Power Generation is predicted to expand significantly in the Global Green Ammonia Market during the forecast period. It owes principally to the exponentially rising energy consumption across the world, entwined with the growing focus of the governments of different countries worldwide on offering energy across rural regions, augmenting the demand for the set-up of a large-scale renewable energy source deployment.

It, in turn, is also stimulating the need for energy alternatives like green ammonia for power generation in a much eco-friendlier way, mitigating modern-day challenges like carbon emission & environmental degradation. Moreover, the utilization of electrolytes in producing green fuel ammonia, which serves as a renewable fuel for electricity production, shall further promote the up-surging demand for green ammonia for power generation and drive the overall market through 2027.

Here, Europe is anticipated to dominate the market with the largest share during the forecast period. This dominance attributes to the extensive adoption of green hydrogen & a widespread utilization of Ammonia, particularly across countries like Germany & the Netherlands. Besides, the utility of Ammonia as a hydrogen carrier makes it more suitable for storage & transportation in the international trade of carbon-free energy across Europe.

Backed by the presence of favorable government initiatives & policies for the production of green hydrogen to achieve energy transition goals & maintaining the workflow of energy-intensive industries across Europe, the demand for green ammonia is propelling across the region & positively influencing the market.

Additionally, a rapid upsurge in innovative technology, increasing investment, and growing industrialization have paved the way for more Ammonia plants to be set up in the coming years, leading to significant market expansion. In fact, the growing inclination towards sustained mobility and strengthening the infrastructure for green hydrogen further boost the market growth in the holistic period. For instance,

Across the region, the Netherlands is the fastest-growing country in the market across Europe, owing to the introduction of a National Hydrogen Program as per the Climate Agreement, aiming to achieve 4GW of installed electrolyzer capacity by 2030.

On the other hand, Asia-Pacific is anticipated to emerge as an area of lucrative opportunities, holding substantial potential for the expansion of the Global Green Ammonia Market during the forecast period. This growth attributes to the growing focus & emphasis of different countries on the alarming carbon emission levels & critical need to curb them. It, in turn, is demonstrating a rise in the number of facility establishments for the research, development, production, distribution, and utilization of green ammonia across diverse industries as a cleaner alternative to other fuels.

Industries like glass, steel, and foundries, among others, that require high-temperature heating could utilize green hydrogen as a renewable alternative to fossil fuels while generating green ammonia, and gas substitution shall make a substantial contribution to the industry growth across the region.

Besides, numerous green ammonia-based projects and government participation & encouragement for the same, particularly across countries like India, shall also play a significant role in stimulating the market, leading to substantial growth with a presence of lucrative opportunities for the players. For instance:

Driven by the escalating demand for long-term storage of renewable energy, the Global Green Ammonia Market is anticipated to exemplify an upward trajectory based upon the immense potential in preventing further withering of climate and environment from renewable energy generation seems, overpowering fossil-based power generation. It, in turn, is augmenting the demand for green hydrogen & directly influencing the requirement for green ammonia.

Moreover, increased consumer awareness & a growing affinity for sustainable products shall also bolster the market growth in the future, backed by the mounting necessity to choose greener solutions like green ammonia. Additionally, strict regulations for carbon footprints & large influx of funds for green ammonia production plants shall further accelerate the market growth pace in the future.

Despite a large number of benefits of green ammonia, restricted commercialization of these elements has surfaced the reachability of these solutions to a limited consumer base only. This aspect might prevail in the coming years and restrain the fledged market growth during the forecast period. Moreover, the use of the latest modern technologies and their high cost of production than fossil-based ammonia is another aspect that might hamper the overall market growth during the forecast period.

A. Mounting demand for long-term storage of clean energy is expected to drive the Global Green Ammonia Market during 2022-27.

A. Solid Oxide Electrolysis (SOE) is anticipated to emerge as an area of remunerative opportunities for the leading players in the Global Green Ammonia Market during the forecast period.

A. ‘Europe’ is anticipated to dominate the Global Green Ammonia Market during 2022-27.

A. Limited commercialization of green ammonia is expected to hamper the market growth during 2022-27.