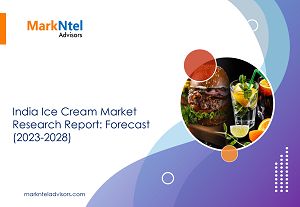 Ice cream is a frozen treat made from milk, cream, sugar, and occasionally other ingredients. In addition to milk or cream, ice cream frequently contains stabilizers such as gluten to help keep the mixture's texture consistent. Since refrigeration has become widespread, this treat has only recently become more widely available. In recent years, frozen custard, frozen yogurt, and even non-dairy ice cream versions have gained popularity as a result of ice cream's surge in popularity. Moreover, the Indian ice cream market is expected to grow rapidly in the coming years due to its increasing popularity.

The India Ice Cream market is projected to grow at a CAGR of around 13.49% during the forecast period, i.e., 2023-28. The market is fueled by factors such as rising average mean temperatures, long summers and heat waves, and western & modern lifestyles. The key reason for the expected increase in ice cream sales in 2022 is the heat waves that swept the country during the summer months when consumers resorted to ice cream for relief from the high temperatures. According to the Indian Meteorological Department (IMD), the average monthly temperature in March 2022 was 33.1°C, the highest in the previous 122 years.

Along with this, the booming E-commerce, as well as the rapid emergence of Q-commerce in India, has significantly aided the growth of the ice cream market. Customers benefit from efficient q-commerce because they can now buy ice cream at the touch of a button. Besides, the outbreak of the COVID-19 pandemic in 2020 also steadily increased the consumption of ice creams via e-commerce among customers, as the lockdown restrictions imposed by the government had inclined the customers to opt for online sales channels due to the unavailability of offline stores.

Moreover, the easy manufacturing process of simple ice creams has facilitated the unorganized sector to grow in rural & remote areas of India. Furthermore, the unorganized sector has grown in recent years, leading to increased ice cream sales in rural areas due to factors such as taste preferences, ease of manufacturing, and affordability of raw materials. The consumers of rural regions prefer flavors like kulfi & kalakand, which are simple to make with the right amount of milk, sugar, and dry fruits.

Nevertheless, the raw materials, such as milk & sugar, are plentiful & inexpensive to the manufacturers. Ice cream manufacturing is a simple process that does not require heavy machinery or a large production line, making it an ideal choice for a regional business.  Furthermore, exotic flavors of ice cream, including tropical fruits, Belgian chocolate, betel leaf, and more, have been introduced by the country's leading ice cream brands, including Giani, Natural's, Keventers, Kwality Wall's, etc., attracting consumers, which in turn has resulted in increased ice cream sales.

Along with this, rising disposable income and a shift in the country's lifestyle have resulted in significant sales of high-priced ice creams, and this is expected to continue in the coming years. As a result of the ice cream manufacturers' ongoing efforts to launch ice creams in a variety of flavors, the diversification of q-commerce in India, and the growth of the unorganized sector, is expected to boost the growth of the India Ice Cream market during the forecast period. 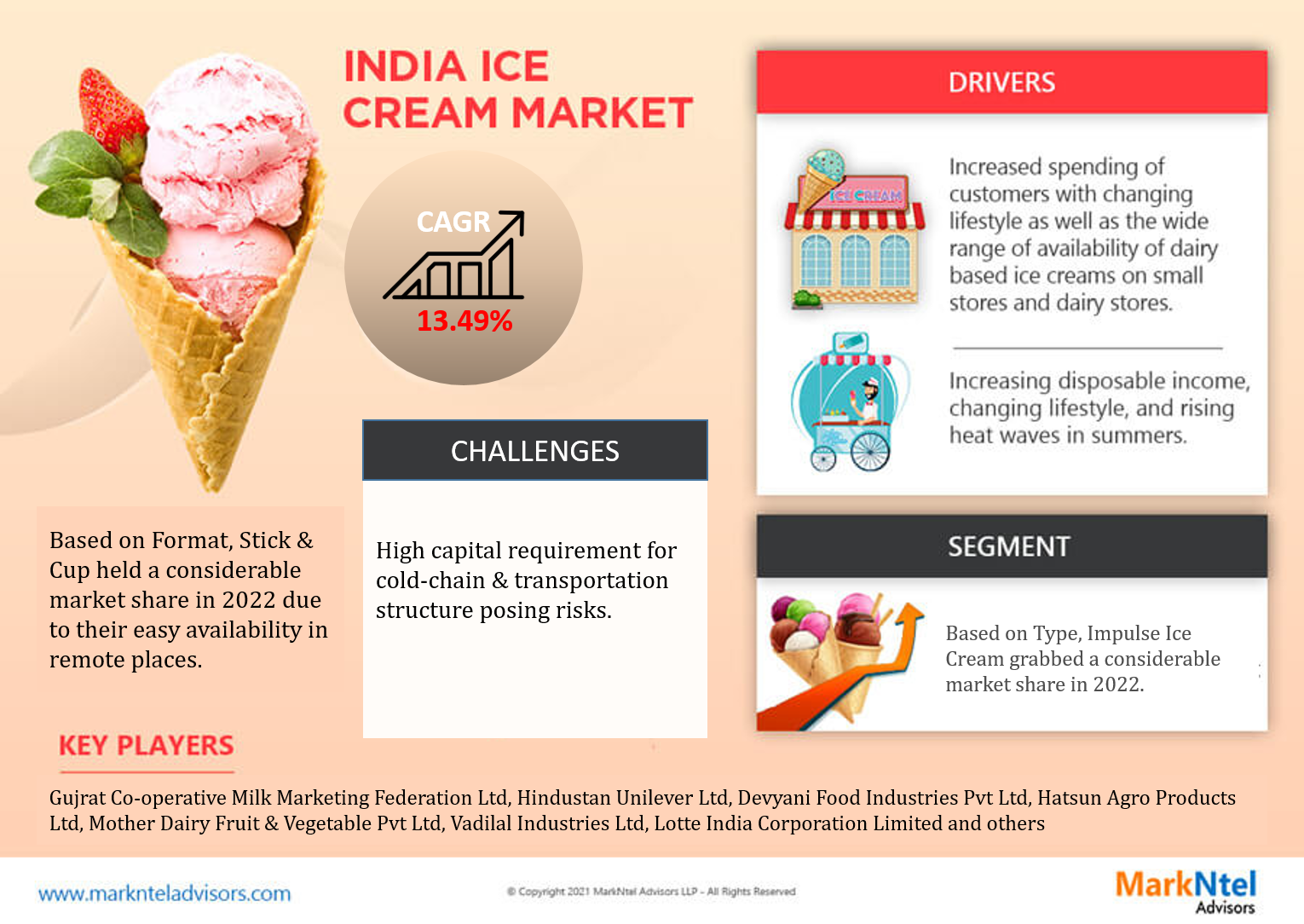 Veganism is a growing trend in the Indian ice cream market, with various brands promoting the sale of vegan ice creams to encourage veganism. Growing environmental awareness supports the cause of going vegan, as the meat industry is one of the biggest reasons for environmental degradation. Moreover, customers are also going vegan to protect animals.

Consequently, due to the rising demand for vegan foods, many startups, such as WhiteCub, Minus 30, etc., have been established to produce vegan ice creams. Furthermore, renowned brands have also been indulging in the production of vegan ice creams. For instance:

Therefore, the above reasons have led customers to shift towards the consumption of vegan ice creams instead of conventional ice creams.

Amongst all, Impulse Ice Cream grabbed a considerable share of the India Ice Cream market over the historical period. The innovative broad range of impulse ice creams experienced substantial sales due to the preferences and choices of customers to purchase water-based, ready-to-consume frozen treats, such as chocolate-coated ice creams and ice cream tubes, during the summer season. India has always been known for its intensive hot climatic conditions from March to July. However, the country has observed a trend of consuming impulse ice creams throughout the year, which is expected to support impulse ice cream sales in the forecast years as well.

Of them, the Stick & Cup format of ice cream held the major market share in the past years as they are easily available even in remote places of India. This is due to the reason that their sales are being majorly done via ice carts. Additionally, stick & cup-format ice cream remains a popular choice for customers of all ages, including the under-18 generations.

Based on Sales Channel:

Here, Ice Cream Carts dominated the India Ice Cream market during the past period, owing to the factors such as convenience & easy availability, even in the remote sectors of India. The majority of ice cream demand is impulsive, which is met by access to ice cream carts. As a result of their ability to meet the demand for impulse ice creams, ice cream carts are projected to hold a substantial market share.

In recent years, the India Ice Cream market has been evenly distributed across the country. Despite this, the western region of India has a slightly higher market share than the rest of the regions due to a favorable combination of several factors such as population, climate, per capita income, logistics, and ongoing urbanization in states such as Gujarat & Maharashtra.

Quick commerce and e-commerce have evolved in recent years, allowing customers to consume ice cream in the comfort of their own homes with just a few taps on their smartphones. This ease of use increased ice cream consumption at home. Furthermore, the pandemic influenced customers' consumption of comfort foods such as candy and ice cream. Due to limited mobility and the closure of out-of-home channels, the pandemic also increased ice cream sales via e-commerce. Even after the lockdown was lifted, the habit persisted due to the ease of access and the wide variety of products available online.

The growth of e-commerce is primarily driven by quick commerce, mainly due to the perishable nature of this product. There is huge potential for ice creams, as the per capita consumption of the same is low compared with other countries like the US & UK. Quick commerce opens up the opportunity to push the at-home consumption of ice cream.

Ice cream is served cold, which poses challenges for brands during ice cream sales. Ice cream requires a temperature range of -18° to -20° to maintain its form, taste, solidity, and texture. Efficient cold-chain management is still lacking in the country, causing branded ice cream companies to lose sales opportunities in areas far from their production center. Furthermore, the problem worsens during the monsoon season, when India's roads & traffic conditions deteriorate, causing accidents & delays in the shipping & delivery of ice creams. Therefore, the lack of efficient cold-chain infrastructure presents a hurdle for ice cream brands.

Customers are becoming more aware of health issues, leading to a trend toward healthier ice creams, which gives ice cream makers the opportunity to boost the production of products with health benefits, such as protein-rich ice creams, vitamin-rich ice creams, etc. For instance:

Consequently, with the ongoing nutritious developments in ice creams, the ice cream industry would be able to fulfill the demand of a large segment of Indian Customers.

A. Impulse Ice Cream is the leading type of ice cream in the India Ice Cream Market during 2023-28.

A. The growing developments in quick commerce and e-commerce is expected to drive the India Ice Cream market during 2023-28.

A. The rise in demand for vegan ice creams has spurred the market of ice cream in the Indian market.

A. The high capital requirement for an efficient cold chain & transportation structure hampers the growth of ice cream brands. 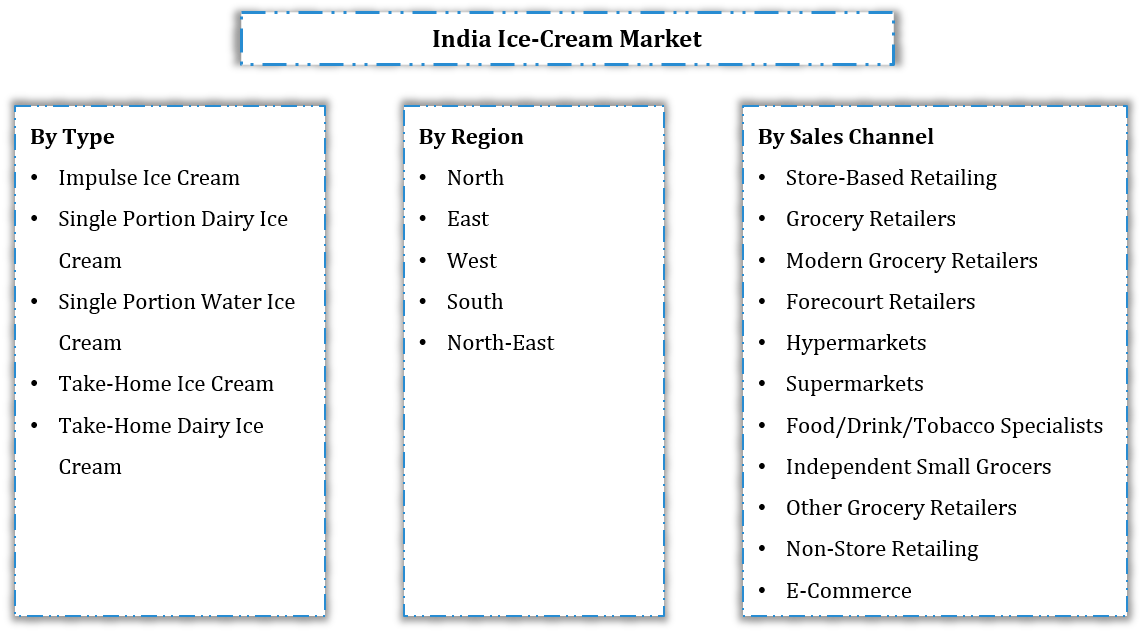