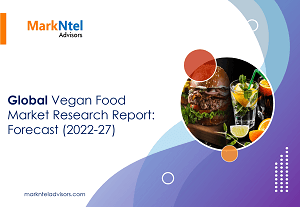 Vegan food consists of products derived from natural or plant-based ingredients and used as dairy or meat substitutes. Dairy alternatives prepared from almonds, soy, rice, coconut, etc., are consumed in place of animal-based milk, ice cream, cheese, & butter, among others. Similarly, vegan meat substitutes are products that resemble actual meat in terms of texture, flavor, & appearance but are based on organic ingredients like soy, wheat, etc.

The increasing obesity rates worldwide and growing prevalence of lifestyle-related diseases like diabetes & high blood pressure, among others, have uplifted the health consciousness levels worldwide. The evolving concerns over animal health & cruelty in the food industry and the rising consumer awareness about the various health benefits of a plant-based diet are thus leading to the upward demand trend for vegan food globally.

The Global Vegan Food Market is projected to grow at a CAGR of 9.5% during the forecast period, i.e., 2022-27. Most of the market expansion would be driven by the mounting consumer awareness about the various health benefits of a vegan diet and the globally rising concerns over animal cruelty. Besides, the surging incidence of obesity, heart diseases, high blood pressure, & diabetes, among others, is another prominent aspect driving consumers toward healthy diets and, in turn, boosting the global vegan food market.

Over the years, there has been a growing number of lactose-intolerant people worldwide, especially across North America & Europe. It, in turn, has prompted them to adopt plant-based food products due to their benefits like controlled blood pressure levels, fewer possibilities of heart diseases, stroke, prostate cancer, colorectal cancer, etc.

In addition, the Covid-19 pandemic that significantly raised health awareness among consumers has drastically impacted their dietary patterns and, in turn, surged the sales of vegan products. Moreover, the digital transformation across different industries, including the food & beverage sector, resulted in the emergence of numerous e-commerce platforms worldwide to cater to the consumer requirements for online deliveries of vegan food & other products amidst the crisis. Hence, these aspects project an upward trend for the Global Vegan Food Market in the years ahead, with numerous startups for vegan food supplies & production entering the industry. 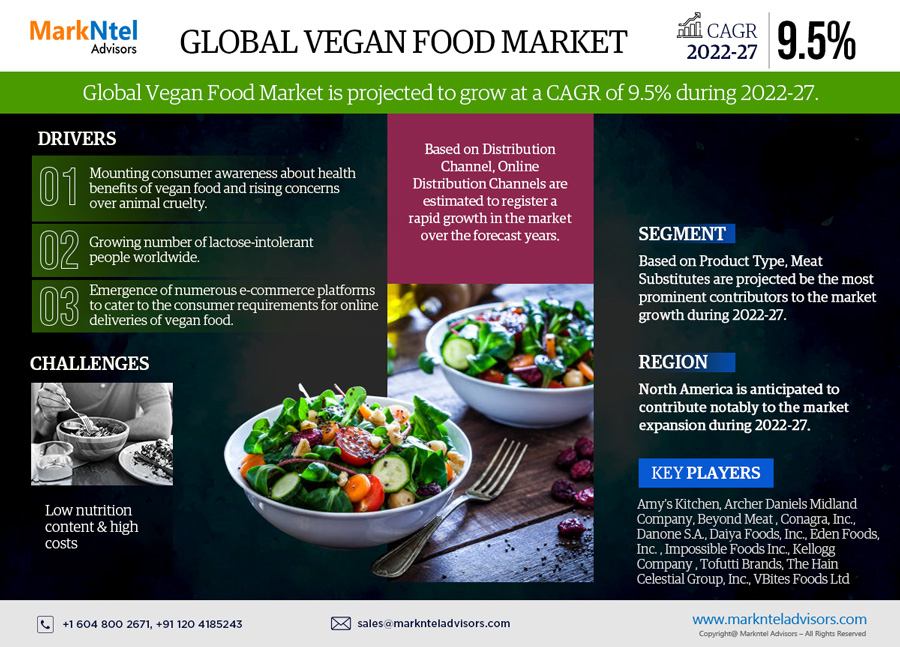 Of both, meat substitutes are likely to be the most prominent contributor to the growth of the Global Vegan Food Market during 2022-27. It attributes to the mounting prevalence of livestock raising & selective breeding that has been well-criticized by many people, owing to its adverse effects on both the environment & animal welfare. As a result, the rising adoption of diets without animal-derived food is infusing the demand for meat substitutes worldwide and driving the Global Vegan Food Market.

With the advent of Covid-19 in 2020, there's an increasing fear among people of the growing prevalence of animal-borne diseases, which, in turn, has raised health concerns among them & declined the consumption of animal-based food. More and more consumers are becoming aware of the growing availability & health benefits of plant-based meat substitutes, which aid in inhibiting digestive disorders, obesity, & non-communicable diseases, among others. As a result, people are changing their lifestyles and adopting meat alternatives, which are products designed & developed as a direct replacement for animal meat as they have the similar taste, smell, texture, & appearance as meat products.

Earlier, meat substitutes did not taste or look like meat, but, with increasing R&D, several innovative, healthier, & sustainable food products have surfaced globally and labeled exclusively as alternatives for animal meat. Hence, with these advancements & the above-stated health benefits, the demand for meat alternatives is projected to rise at a significant pace and, in turn, fuel the overall growth of the Global Vegan Food Market.

Here, online distribution channels are estimated to register a rapid market growth pace in the forthcoming years. It attributes prominently to the growing penetration of smartphones & the internet worldwide, coupled with their various benefits like the extensive availability of products, multiple payment options, doorstep deliveries, and an overall hassle-free shopping experience.

With the advent of Covid-19, both manufacturers & consumers made a paradigm shift to e-commerce platforms. There are massive investments by retailers taking place in adopting online sales channels to cater to the mounting consumer demand for vegan food & other related supplies. Hence, the rapid rise in the number of online grocery platforms providing vegan food supplies worldwide would augment the overall growth of the Global Vegan Food Market in the years ahead.

Of all regions, North America is anticipated to make a prominent contribution to the global expansion of the Vegan Food Market during 2022-27. It owes principally to the changing living standards of people and their growing sensitivity & inclination toward a vegan diet as an initiative to reduce animal cruelty. These aspects are instigating food manufacturers to increase their production & distribution capabilities to cater to the burgeoning consumer demand for plant-based food products across North America.

Besides, associations like People for the Ethical Treatment of Animals (PETA) & North American Vegetarian Society (NAVS), among others, are actively encouraging veganism among people and making them aware of the availability of a wide range of meat & dairy substitutes across the region.

In addition, the mounting consumer focus on maintaining health owing to the rising number of people with lactose-intolerance & other health-related issues associated with toxic additives used in dairy products is another prominent aspect expected to augment the demand for vegan food across North America and fuel the overall market growth in the years ahead.

The rising prevalence of obseity & cardiovascular diseases among people owing to their sedentary lifestyles, coupled with the mounting concerns over animal-based food products, are the prime aspects projected to drive the Global Vegan Food Market during 2022-27.

These lifestyle-related disorders, along with the advent of Covid-19, have led to increased health consciousness among people. It, in turn, is instigating more & more consumers toward adopting a vegan diet since it aids in weight loss, improves blood flow, and minimizes risks of cardiovascular diseases. Hence, various restaurants, cafes, & other food chains worldwide have added vegan food to their menus and are launching new recipes in order to cater to the burgeoning consumer requirements for vegan food.

In addition, there are mounting concerns over animal cruelty, i.e., another aspect leading to the growing adoption of healthy lifestyles & vegan diets in order to prevent environmental impacts caused by consuming animal-based food products. Therefore, these aspects project remunerative prospects for the Global Vegan Food Market through 2022-27.

Undeniably, there are numerous benefits of plant-based or vegan food. However, with those, there are a few challenges to its adoption, viz., high costs & lack of adequate nutrition, which might hamper the overall growth of the Global Vegan Food Market during 2022-27.

Several food manufacturers worldwide are producing & launching different varieties of vegan food products. However, since their prices are relatively higher than those of animal-derived food, along with taste disparities, there's slow adoption of vegan food among people.

Moreover, almost all vegan food products lack adequate nutrition, which causes various health issues like hormonal disorders & Vitamin B12 deficiencies, among others. Consequently, it makes them seek advice from healthcare professionals in order to attain a balanced & healthy diet. Hence, these aspects are very likely to hinder the expansion of the Global Vegan Food Market in the years ahead.

A. The rising concerns over animal cruelty and the growing health consciousness among people, especially after the Covid-19 pandemic, are the most prominent factors projected to drive the Global Vegan Food Market during 2022-27. On the other hand, the high prices & nutritional deficiencies associated with vegan food products might hinder the growth of the global market in the years to come.

A. Online platforms are anticipated to emerge as an area of remunerative opportunities for the leading players in the Global Vegan Food Market over the forecast years. 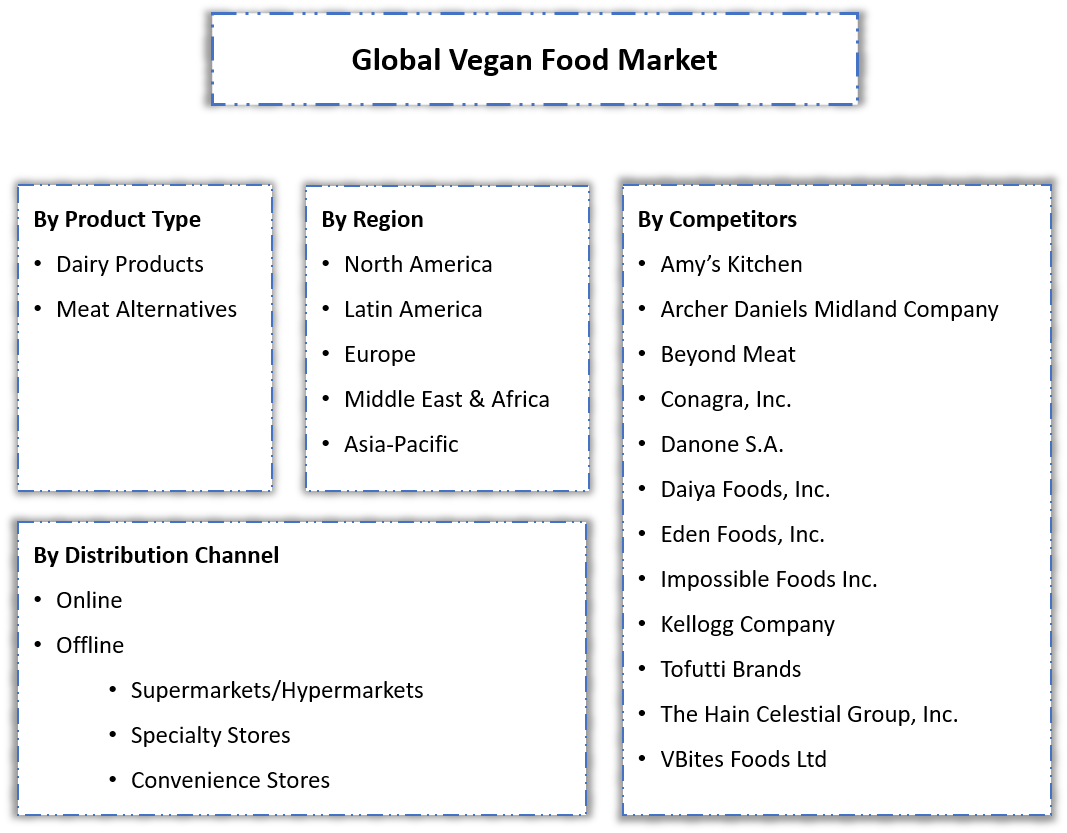