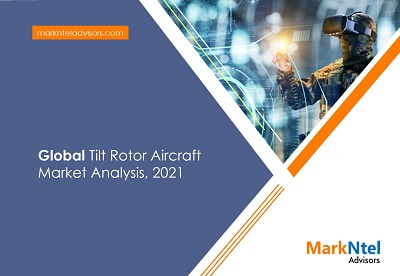 The Global Tilt Rotor Aircraft Market is projected to grow at a CAGR of around 5% during the forecast period, i.e., 2021-26. The growth of the market is driven primarily by swiftly escalating geopolitical tensions & trade wars entwined with massive investment by the governments of different countries worldwide in the development & adoption of Tilt Rotor Aircraft.

In addition, rising acquisitions by several countries for the procurement of technologically advanced aircraft across the global defense sector to strengthen national security are further propelling the demand for tilt-rotor aircraft and driving the global market. For instance:

Such an increasing number of procurements are anticipated to fuel the market growth during the forecast period. Nonetheless, numerous governments are swiftly taking initiatives to develop other tilt-rotor aircraft like Unmanned Aerial Vehicles (UAVs) & contributing to market growth. For instance:

Impact of Covid-19 on the Global Tilt Rotor Aircraft Market

In 2020, the Covid-19 pandemic had a decelerating effect on most industries worldwide, where the Global Tilt Rotor Aircraft Market was no exception. The governments of different countries imposed stringent movement restrictions & frequent lockdowns to curb the spread of this dreadful disease.

Additionally, most countries temporarily reduced their defense budget and put their investments in addressing the Covid-19 crisis. Moreover, since the lockdowns lasted for a long while, numerous research & development activities, production, and demand for Tilt Rotor aircraft reduced drastically, owing to which market players observed substantial financial losses.

However, with the gradual improvement in the pandemic situation and the reducing number of Covid-19 cases, governments uplifted restrictions and allowed the recommencement of business operations. As a result, the market is projected to revive & recover from the loss & generate lucrative growth opportunities for the leading players in the coming years.

Of them all, Unmanned Aerial Vehicles (UAVs) are anticipated to gain significant momentum in the market during the forecast period. It owes principally to the mounting need for robust armed forces using technologically advanced equipment, vehicles, & weapons due to rapidly changing warfare. It, in turn, is soaring the demand for Tilt Rotor Aircraft like UAVs that can reach difficult areas & acquire critical information.

Besides, several governments are immensely investing in their armed forces and encouraging the development & procurement of warfare fleets like UAVs. These aircraft are used extensively for gathering intelligence, managing battle damage, transportation, deliveries, target attacks, and combat operations, among various others.

Of both, the Military sector held the largest market share in recent years and is anticipated to continue its dominance during the forecast period. It attributed prominently to the increasing geopolitical tensions, rising trade wars, and increasing terrorism, propelling the governments of different countries worldwide to strengthen their military forces & procure technologically advanced weapons & vehicles. It, in turn, is boosting the demand for tilt Rotor aircraft & driving the global market, owing to which governments of numerous nations are immensely investing in the market for the development & procurement of new Tilt Rotor Aircraft.

On the geographical front, the Global Tilt Rotor Aircraft Market expands across the following regions:

Geographically, amongst all regions, North America is anticipated to dominate the market with the largest share during the forecast period. It owes principally to the massive expenditure in the defense sector by countries like the US to strengthen its defense sector & enhance national security, thereby propelling the demand for technologically advanced aircraft like Tilt Rotor.

Besides, the mounting establishment of prominent players in the region & the intensifying competition among them shall further promote the development of these aircraft and generate lucrative growth opportunities for the regional market through 2026.

On the other hand, Europe is projected to emerge as a competitive & opportunistic region for the Tilt Rotor Aircraft Market during 2021-26, mainly due to the robust militaries of countries like Germany, France, the UK, Italy, etc., coupled with their massive expenditure on procuring technologically advanced weapons, equipment, vehicles, & aircraft.

Besides, with the increasing adoption of UAVs in warfare & locations where human reach is challenging, the demand for Tilt Rotor UAVs in Europe is rising substantially & making a positive influence on the regional market growth. Moreover, several countries across Europe, especially the North Atlantic Treaty Organization (NATO) members, are immensely increasing their defense budgets to reach their defense spending targets, which is another crucial aspect that shall boost the regional market over the forecast years.

It shall bolster significant growth opportunities for the leading market players and drive the global market during 2021-26. Besides, with escalating terrorism & geopolitical tensions across several countries, governments are rapidly encouraging the adoption of these aircraft to address security threats, which is another crucial aspect projected to drive the global market over the forecast years.

In addition, everyone can't bear the substantial investments required for aircraft certification. Hence, the aspects cited above might restrict the local manufacturing of tilt-rotor aircraft and hamper the growth of the Global Tilt Rotor Aircraft Market in the coming years.

The Air Ambulance sector across Europe is thriving and shall observe significant growth in the coming years, mainly due to the extensive presence of prominent air ambulance service providers in the region entwined with an increasing demand for these services. As of now, air ambulances in Europe are using fixed-wing aircraft, helicopter fleets, or both.

However, with rapid technological development & commercialization of Tilt Rotor aircraft, Europe's air ambulance industry is anticipated to witness a surging demand for these aircraft since they possess capabilities of both fixed-wing aircraft & helicopters. Consequently, the region shall generate remunerative growth opportunities for the leading players, gain a massive customer base, and contribute to the overall market growth in the years to come.

A. The Global Tilt Rotor Aircraft Market is projected to grow at a CAGR of around 5% during 2021-26.

A. The Military sector is anticipated to emerge as an area of remunerative opportunities for the leading players in the Global Tilt Rotor Aircraft Market through 2026.

A. Rapidly increasing terrorist acts entwined with mounting investments by the government of different countries in the defense sector to strengthen national security are projected to soar the demand for Tilt Rotor Aircraft and drive the global market during 2021-26.

A. In the coming years, the Global Tilt Rotor Aircraft Market is anticipated to witness steady growth with massive investments by governments of different countries worldwide in developing & procuring new tilt-rotor aircraft with advanced technologies to strengthen national security. These acquisitions shall generate lucrative growth opportunities for the leading market players through 2026. 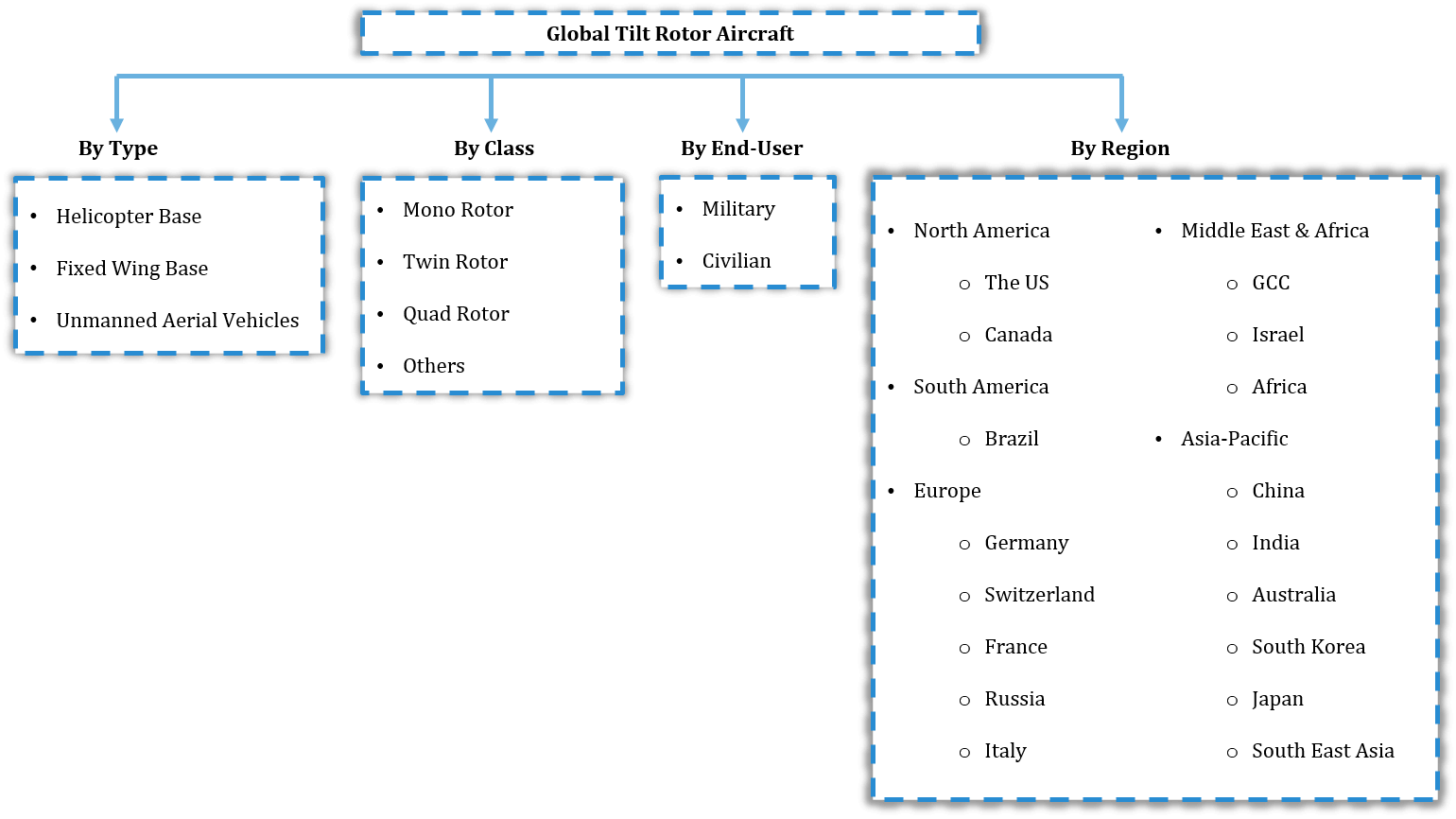