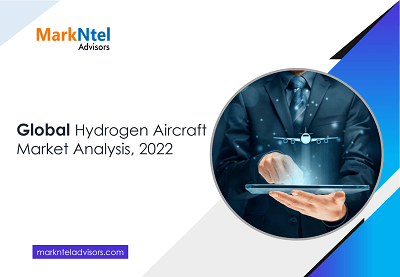 With the swiftly increasing carbon emissions, several nations worldwide are actively coming together & looking for ways to decarbonize different industries. Among all, the aviation industry is solely responsible for generating massive emissions due to the vast passenger & air traffic and is the most challenging sector to attain net-zero-emission. Hence, the industry is actively taking initiatives to go green & reduce its usage of traditional carbon-based fuels and opt for more sustainable fuel alternatives.

Numerous governments globally & prominent companies are investing substantially in several research & development activities to bring hydrogen as an aircraft power source. The hydrogen-powered aircraft can utilize hydrogen energy by either burning it in the jet/ICE engines or powering a fuel cell to run the aircraft propellers.

According to MarkNtel Advisors, the Global Hydrogen Aircraft Market is projected to grow at a CAGR of around 27.5% during the forecast period, 2022-27. The market is driven primarily by various technological advancements across the aviation industry like improved propulsion systems & fuel cells, enhanced fuel efficiency, & better aircraft design that are achievable using hydrogen-powered aircraft. Currently, the market is in its development phase where private companies & governments are massively investing in hydrogen-aircraft technology to decarbonize the aviation industry.

According to International Air Transportation Association (IATA), 2021 shall continue to bring positive changes to the industry and boost the number of airline passenger transportation across different regions. Hence, start-ups & prominent players are presenting new concepts in the market to expand the scalability of aircraft for applications like urban air mobility, defense, surveillance, etc.

For instance, a British-American start-up company, ZeroAvia, is developing hydrogen-powered aircraft to decarbonize & reduce the adverse effects of conventional aircraft on the environment. Besides, the UK government, along with private investors & commercial partners, is supporting ZeroAvia in developing the aircraft with a hydrogen-electric (fuel cell) powertrain that could carry up to 20 passengers for about 648kms. The start-up has also secured experimental certificates from Federal Aviation Administration (FAA) & Civil Aviation Authority (CAA) for its two prototype aircraft.

With the Covid-19 pandemic in 2020, aviation was the most severely affected industry, principally due to the imposition of stringent travel restrictions & nationwide lockdowns that significantly reduced passenger & air traffic. This combination of changes in passenger travel behavior led to substantial economic loss to the aviation sector.

However, with canceled flights and grounded aircraft, emission levels reduced substantially amidst the crisis. Besides, movement restrictions & shut down of research centers resulted in a temporary halt on several development activities for Hydrogen Aircraft.

Furthermore, due to the gradual upliftment of these restrictions, the market has been slowly gaining traction since 2021, with the maximum recovery pronounced for domestic travel than international. Nonetheless, the resumption of development activities with the reopening of research facilities shall further promote market growth in the coming years. 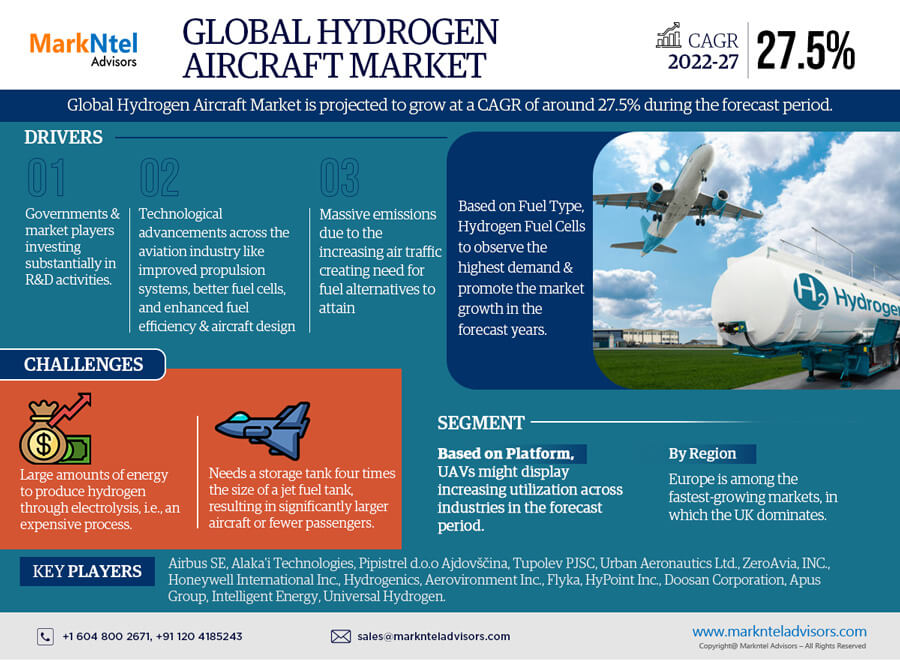 Based on the Fuel Type, the Global Hydrogen Aircraft Market segments into:

Of both, Hydrogen Fuel Cells might observe the highest demand & drive the global market over the forecast years. It owes to the capabilities of fuel cells of combining hydrogen & oxygen in the air to produce electricity with zero emissions & immense power for a given weight, and are 45% more energy-efficient than the Hydrogen Combustion type. Owing to such efficiencies & benefits like decarbonization, prominent market leaders like Airbus are investing substantially in fuel cell propulsion systems for their aircraft, thereby driving the market.

On the other hand, based on Platform, the Global Hydrogen Aircraft Market segments into:

Of them all, UAVs (Unmanned Aerial Vehicles), particularly drones, are projected to observe extensive application & operational feasibility across different verticals in the coming years. With hydrogen fuel cells, drones might fly for like 3 hours & also for missions like surveillance & inspection for a longer duration. Additionally, due to the low mass & higher energy density of hydrogen, the demand for UAVs like drones is likely to increase significantly and drive the global market in the coming years.

Of them all, North America is projected to display sizeable growth for the hydrogen aircraft market in the coming years owing to the increasing investments for developing commercial hydrogen aircraft. Back in 2008, Boeing launched their first hydrogen-powered aircraft to test the feasibility of hydrogen fuel and promote a shift of the aviation sector toward zero-carbon.

Besides, in 2021, Universal Hydrogen began testing hydrogen-powered aircraft with fuel cells in passenger jets. The company received funding of USD 20.5 million in the same year toward developing its first product, lightweight modular capsules, for the transportation of "green hydrogen," to be available for varied Vertical Take-off & Landing platforms.

Furthermore, according to the US Department of Energy Hydrogen Program, an internal combustion engine runs on 20%-25% energy efficiency. However, fuel cell technology has reached 40% to 60% efficiency, i.e., significantly higher than other alternatives & readily available for hydrogen-based aircraft.

On the other front, Europe is among the fastest-growing regional markets, with the UK leading the regional market, mainly due to various initiatives by ZeroAvia, a startup in hydrogen aircraft development. The company is currently working on developing hydrogen-powered aircraft and receiving financial support from the UK government for a project, 'HyFlyer,' to decarbonize mid-range small passenger aircraft by manifesting powertrain technology.

Additionally, the Jet Zero Council of the UK government is also actively focusing on the production facilities for sustainable aviation fuels & boosting design, manufacturing, & commercial operations of the zero-emission aircraft, and, as a result, is driving the regional market.

Moreover, Airbus, the largest aircraft manufacturer based in the Netherlands, proposes to produce three concept planes for commercial deployment by 2035. These aircraft include:

A. Hydrogen Fuel Cells are anticipated to witness the burgeoning demand and emerge as an area of opportunity for the leading players in the market through 2022-27.

A. The increasing pressure on governments worldwide toward promoting eco-friendly & emission-free transportation modes on account of the Paris Agreement, which intends to address & prevent the adverse effects of climate changes, is the prime aspect expected to drive the Global Hydrogen Aircraft Market in the forecast years.

A. The Global Hydrogen Aircraft Market is anticipated to witness massive funding & support from the governments of different countries & private companies in the forecast years to build aircraft that could use hydrogen as a power source and, in turn, promote decarbonization. 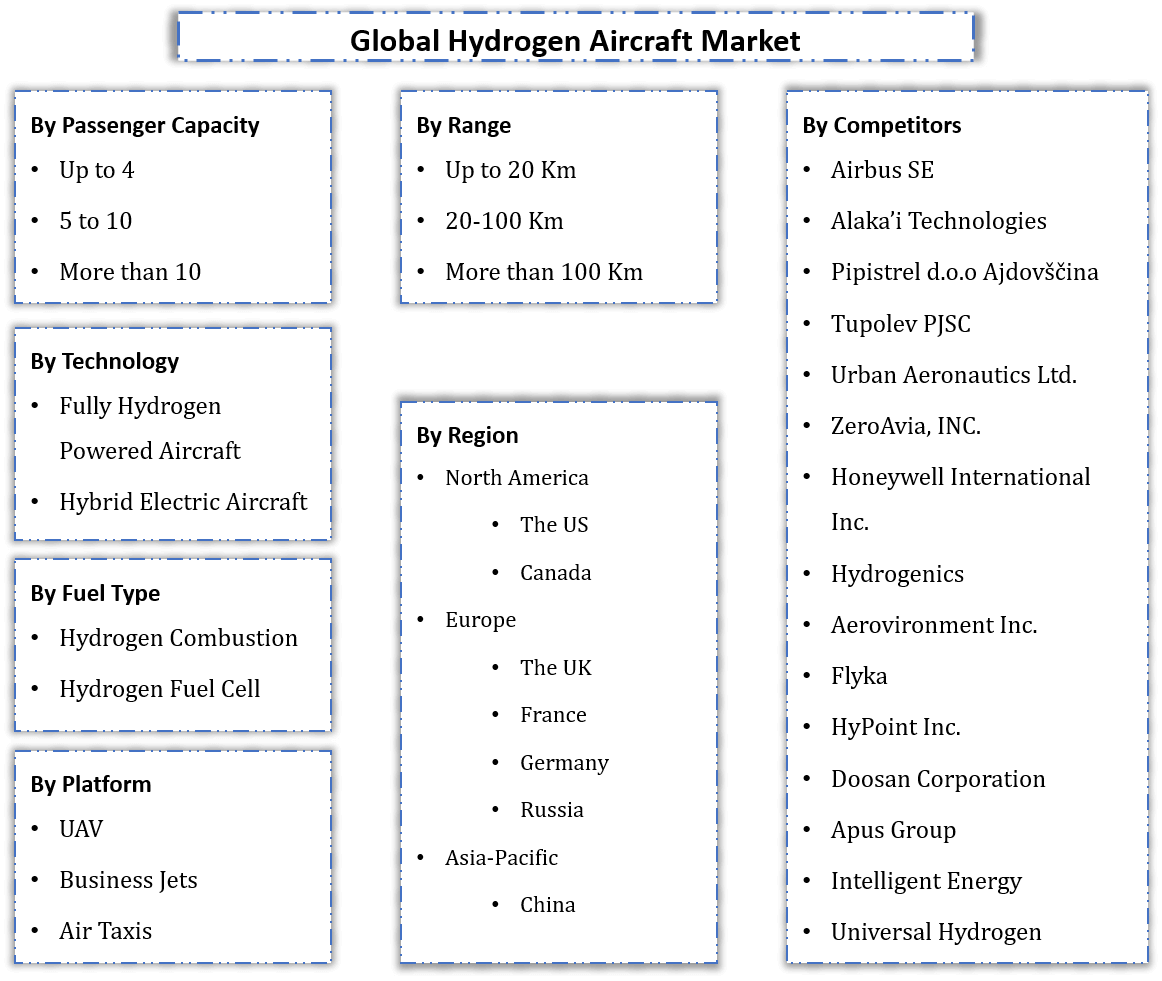