Hydrogen has always been a prominent energy source since the first combustion engines emerged long ago. Things have not changed much, just the efficiency in hydrogen utilization and its application expansion across different industries, including modern-day refining. Yet, the massive emissions of greenhouse gases like carbon dioxide (CO2) & methane (CH4) and the ill effects of hydrogen compromising health & environmental sustainability have raised alarming concerns over its usage for power generation. Such aspects have instigated the development & utilization of its greener & cleaner alternatives, and green hydrogen has emerged as a promising & sustainable power generation technology.

Green hydrogen is hydrogen procured from splitting water into hydrogen & oxygen as a renewable source of electricity. Today, the importance of Green Hydrogen is extensive in energy transition and needs an accelerated deployment to actually make a change in decarbonizing existing power systems. In the same view, the governments of different countries worldwide are projecting electrification with a greater inclination toward the use of renewable resources like green hydrogen for power while leveraging low-cost renewable electricity. The later phase shall include the difficult to electrify sectors like aviation, shipping, and heavy industries.

The Global Green Hydrogen Market is projected to grow at a CAGR of around 15.7% during the forecast period, i.e., 2023-28. The market is driven by the escalating emissions, including carbon & methane, in the environment and their ill effects on environment sustainability & health. It, in turn, is instigating the governments of different countries to bring favorable policies and encourage the development, production, and utilization of green hydrogen as an alternative to widely used hydrogen across industries for energy. The role of the governments of different countries is highly prevalent in this industry & contributes substantially to exploring the potential of green hydrogen in the coming years. For Instance:

Besides, as many countries are brining swift electrification in their infrastructure, the potential for green hydrogen is widening dramatically high and hinting toward the presence of lucrative opportunities for the leading players. In addition, green hydrogen still needs further research & development to fledged witness acceptance across industries yet, with the massive demand for hydrogen, it is likely to replace the fuel and hold a firm place in the future. Owing to such aspects, several leading players are investing substantially in the industry and laying out new plans to exercise the benefits in the coming years and procure a dominant place in the market.

Moreover, with a greater focus on bringing energy efficiency and a paradigm shift toward renewable resources for a cost-effective supply of energy, residential, commercial, & industrial sectors shall augment the utilization of green hydrogen as a prominent energy source to run different operations & contribute to the overall market expansion.

Proton Exchange Membrane (PEM) Electrolyzer technology is expected to gain significant momentum in the Global Green Hydrogen Market during 2023-28. It owes to the growing awareness among manufacturers about its benefits over other technologies, such as better hydrogen production rate, compact design, & enhanced energy efficiency. 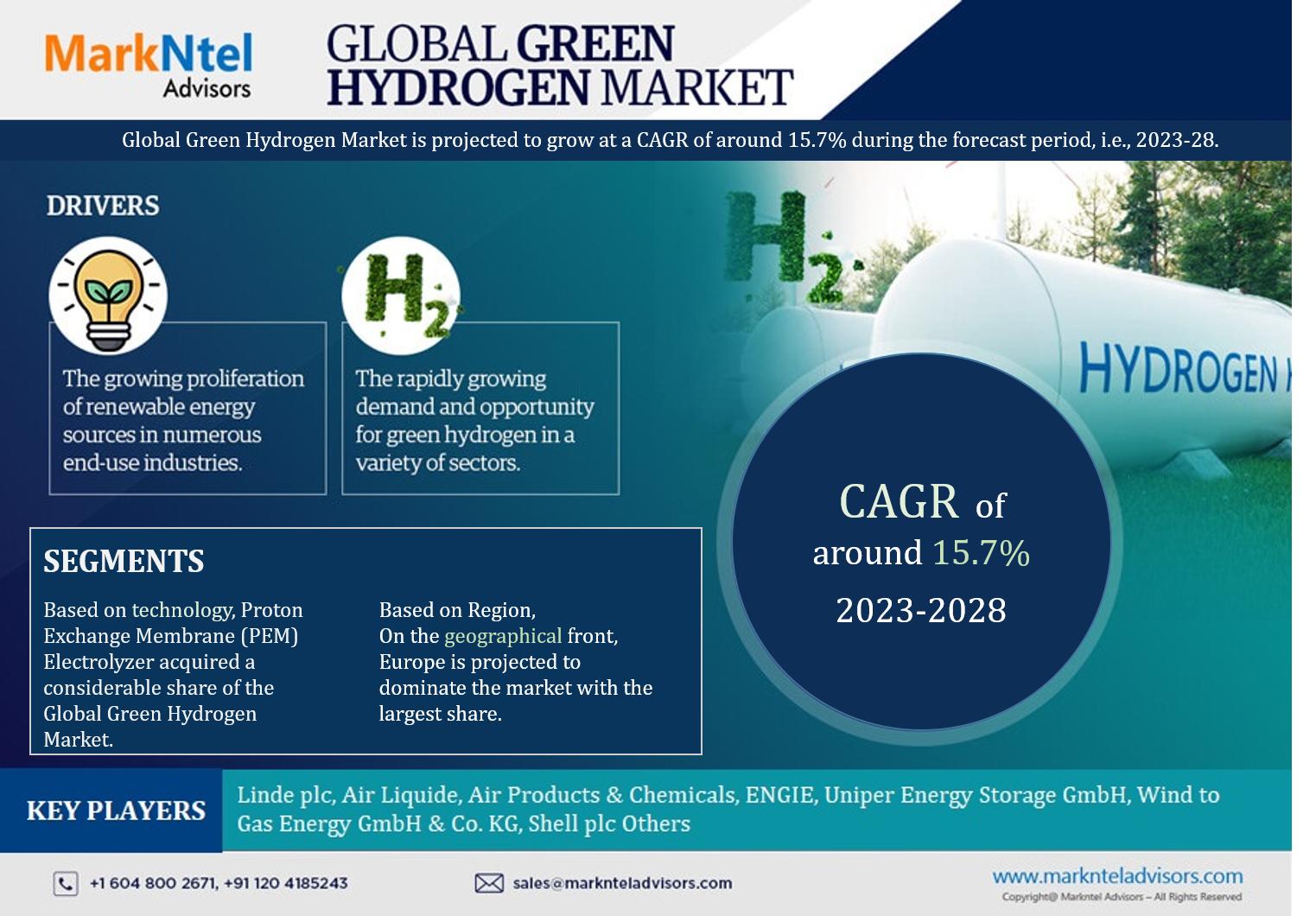 Consequently, more & more companies are expanding their development & production capacities using PEM electrolyzers in order to cater to the burgeoning end-user requirements for green hydrogen globally. In addition, the increasing emphasis is being directed toward deploying this technology at commercial scales to make the power generation process even more power-efficient. For instance:

Of all regions globally, Europe is set to dominate the Green Hydrogen Market with the largest share during 2023-28. It ascribes to the active participation of the governments of different countries in the region demonstrating a keen interest in curbing emissions and bringing greater environmental sustainability by making paradigm shifts to renewable resources for power generation instead of fossil fuels. It, in turn, is also hinting toward a rise in the research & development of green hydrogen & its set plans for deployment in the future.

It can be said that the active participation by the governments of different countries through investments & initiatives for the research & development of green hydrogen shall make significant contributions to the market growth and generate lucrative opportunities for the leading players in the coming years. This participation is backed by the growing need to make an energy transition into clean a hydrogen-based economy. For instance:

Across the region, Germany is projected to make substantial contributions to the market expansion in the coming years. It owes principally to the country being a hub for resources like offshore wind, solar power, electric vehicle, and consumer electronics entwined with the extensive potential utilization of green hydrogen across these industries as a prominent source of energy. Due to such potential, the government is making significant investments in green hydrogen to cater clean & sustainable energy requirements and generate remunerative opportunities for the players. For Instance:

On the other hand, Asia-Pacific is anticipated to exemplify the fastest growth pace in the Green Hydrogen Market and emerge as an opportunity area for prominent players over the coming years. It owes principally to the growing focus of the governments of different countries in the region on addressing emissions and developing the infrastructure that is more dependent on renewable resources. Countries like China, India, and Australia, among others, are prominent contributors to Green Hydrogen Market growth.

China is demonstrating an extensive utilization of renewable resources in power grids, thereby widening the potential of green hydrogen as a power source. While the government is laying out mandates for decarbonization and luring the demand for carbon-neutral hydrogen, the investments in the research & development of green hydrogen are expanding and generating opportunities for the players, poised to expand the overall industry during the forecast years.

Similarly, India is nowhere behind and contributing notably to the regional market expansion. On 15 August 2021, the country formally announced the inauguration of the "National Hydrogen Mission," aiming to generate carbon-free fuel from renewables & make the country a global hub for the production & export of green hydrogen. Such projects & initiatives are attracting numerous players to participate in the green hydrogen market growth. For Instance:

Furthermore, the government of Australia is also actively participating in the market and taking steps to boost the domestic production of green hydrogen. The introduction of initiatives like Clean Energy Innovation Hub in 2019, inviting investors like Toyota with advanced fuel cell technology is also making a positive influence on the green hydrogen market growth.

Nonetheless, Japan is also making substantial contributions to the market growth, principally by the active participation of the companies indulged in green hydrogen production. For Instance:

Among all the regions, European Union laid significant regulations exhibiting a plan to bring green hydrogen to application widely across industries.

The European Union policymakers plan to make the region a global leader in green hydrogen equipment & zero carbon-heavy industry. It is where green hydrogen is viewed as an ultimate strategy to slash the compatibility of hydrogen with zero-emission systems.

This strategy principally aims to build at least 6 GW of Electrolyzer capacity by 2024, which should be enough to produce up to 1 Mt/yr. of green hydrogen. It, in turn, shall increase to 40 GW in EU countries by 2030, with 40 GW of Electrolyzer added capacity in southern & eastern neighbors. This shall further allow the European Union to import green hydrogen efficiently in the future.

As green hydrogen is widely in its research & developmental phase, its production cost is significantly high. Electrolyzers are prominent in green hydrogen production, which is why high initial capital investment required for establishing plants for these units might restrain the fledged expansion of the green hydrogen market globally over the forecast years. Companies might limit themselves from investing in establishing large-scale green hydrogen production facilities worldwide. Additionally, the easy availability of alternative methods like steam methane reforming & coal gasification for the production of low-cost hydrogen might also affect the growth of the Global Green Hydrogen Market in the coming years.

A. The high capital investment for the establishment of green hydrogen production plants might restrain the fledged expansion of the Green Hydrogen Market during the forecast period

A. Proton Exchange Membrane (PEM) Electrolyzer is anticipated to emerge as an area of remunerative opportunities for the leading players in the Green Hydrogen Market during the forecast period.

A. Europe would provide profitable prospects to the Green Hydrogen Market during 2023-28.