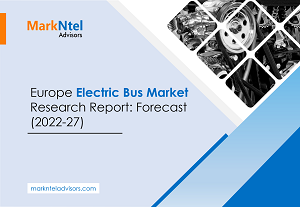 Electric Buses are vehicles that attain their propulsion & accessory systems by zero-emissions electricity sources like batteries, hydrogen fuel cells, & overhead wires, among others. These buses are also called e-buses and can recharge through regenerative braking systems, solar panels, off-board chargers, & storage battery banks, among others. Usually, these vehicles function by sending a signal to the powertrain system controller for high-voltage battery power & converting the stored chemical energy into electrical energy.

The Europe Electric Bus Market is projected to grow at a CAGR of around 16.66% during the forecast period, i.e., 2022-27. The market is driven by the presence of stringent limitations by the governments of different countries in the region to curb the mounting emissions, where pollution from automobiles has been the prominent cause. It, in turn, is demonstrating a rise in the adoption of electric vehicles, including buses, curating the market dynamics & instigating the leading players to increase their development, production, and distribution capacities for these vehicles.

Besides, the active participation of the prominent players in the development of hydrogen fuel cell-powered electric buses is also playing a significant role in driving the demand for e-buses across Europe. Moreover, battery manufacturers, on the other hand, are also investing in the production of cost-effective & technologically advanced batteries to promulgate the demand for e-bus and stimulate the overall market.

Additionally, the growing awareness among people about the benefits of e-buses overall diesel alternatives, particularly in terms of exhaust emissions, air quality & the lower total cost of ownership (TCO), are propelling the deployment of these vehicles for public transportation. Backed by these benefits, the governments of different countries in the region are setting targets to accelerate the adoption of e-buses. For instance:

The governments of different regional countries are signing initiatives like European Clean Bus Deployment Initiative to increase the deployment of clean buses and hinting toward the presence of lucrative opportunities for the players to make significant contributions to the market growth through 2027. Furthermore, plans and initiatives for the development of robust charging infrastructure for electric buses shall also make a mark in the industry expansion. For instance:

As concerns over the ill effects of air pollution & emission on human health & environment are mounting rapidly, alongside the skyrocketing prices of fossil fuels, the demand for greener, cleaner, and cost-effective alternatives is escalating swiftly. It, in turn, is also influencing the demand for Electric Vehicles, including Buses, replacing Internal Combustion Engines (ICE) buses across Europe. In fact, by the time it is 2030, Europe shall demonstrate an approximately 67% surge in the sales of zero-emission buses, which would reflect a fleet size of 65,000 e-buses.

In the same line, various governing agencies in the region are also participating actively in the industry and contributing through the implementation of intense emissions regulations, propelling the demand & sales for electric buses as a zero-emission solution. Since such moves allow cities to meet their environmental goals without compromising the transportation infrastructure, it is set to have a growing & opportunistic future for the industry in the coming years. 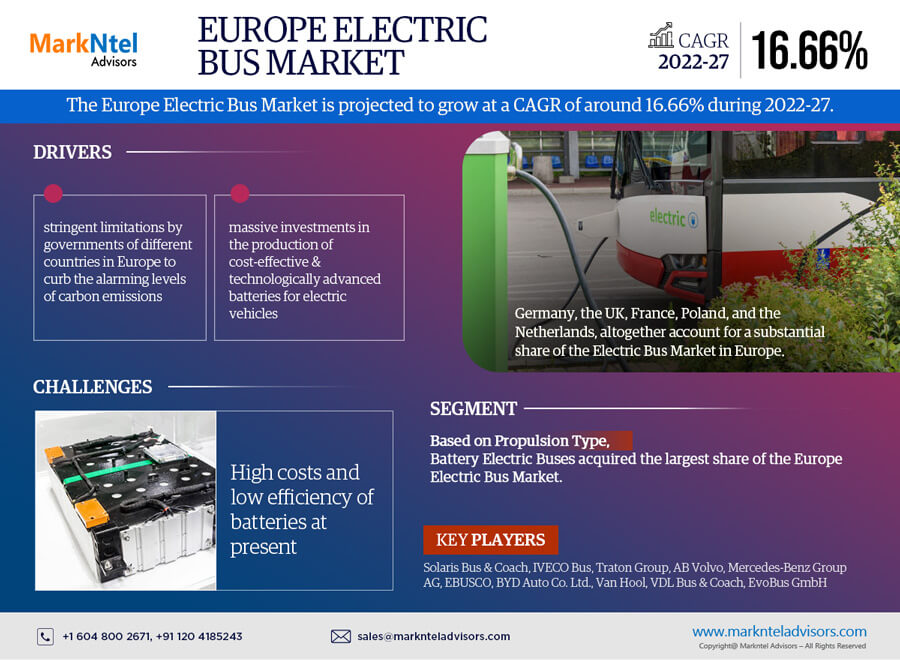 Based on Propulsion Type:

Here, Battery Electric Bus acquired the largest share of the Europe Electric Bus Market in the previous years and shall prevail in the same trend during the forecast period. This dominance attributes to the capabilities of these vehicles to store electricity on-board in the high-capacity battery sets that utilize the benefits of those batteries to function as an electrical motor. The growing awareness among people about these perks is demonstrating an inclination toward battery based -buses & instigating the manufacturers to boost their production capacities.

On the other hand, Fuel-Cell Electric Buses shall demonstrate the fastest growth in the Europe Electric Bus Market during the forecast period. It owes principally to the automaker's preference shift to hydrogen-based fuel cell buses for higher durability & speedy refueling capabilities than regular e-buses, attracting a substantial consumer base, thereby contributing to the market growth.

On the geographical front, the Europe Electric Bus Market expands across:

Among all, Germany, the UK, France, Poland, and The Netherlands, have altogether accounted for a substantial share of the Europe Electric Bus Market in previous years. It is anticipated that each country would make a significant contribution to the market growth and hint toward the presence of lucrative opportunities for the leading players during the forecast period.

This growth & dominance attributes to the active participation of the governments of different countries and their encouragement toward the adoption of Electric Buses to curb emissions and meet environmental goals. It, in turn, is demonstrating a rise in the sales of e-buses across countries. For instance:

Considering the hiking sales of Electric Buses, it is anticipated that these buses would reflect a substantial rise in urban bus sales by the end of the decade. It shall be driven on the back of rapid electrification & new mobility business models, including shared mobility & autonomous vehicles.

Since Electric Buses equipped with batteries are expensive and need a timely inspection to ensure top-notch performance, may cost-sensitive users might be hesitant in investing in Electric Buses. Besides, the total cost of ownership & maintenance for these buses is higher than conventional buses, discouraging users to buy gasoline-powered buses.

Moreover, as of today, the overall battery performance of e-buses is lesser than traditional buses owing to the low charging capacity, long charge duration, and limited range per charge. Such lower performance might affect the demand for these buses, particularly in colder climates, affecting the overall perform performance efficiency of the vehicle and hampering the fledged growth of the Europe Electric Bus Market.

A. Batter Electric Bus is anticipated to emerge as an area of remunerative opportunities for the leading players in the Europe Electric Bus Market during the forecast period.

A. Government mandates for electrification of transit system is a key trend in the Europe Electric Bus Market.

A. High cost installation & maintenance cost alongside the low battery efficiency are the possible restraints that might hamper the fledged growth of the Europe Electric Bus Market through 2027.