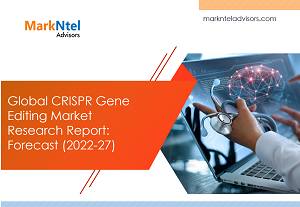 Moreover, the rising prevalence of genetic disorders & growing research & development in biotechnology companies to yield better genomic results are the major factors contributing to the growth of the Global CRISPR Gene Editing Market, 2027.

The Global CRISPR Gene Editing Market is projected to grow at a CAGR of around 18.24% during the forecast period, 2022-27. The market is expected to witness significant growth, owing to the increase in demand for genome editing technologies for treating genetic & chronic disorders in humans. Other factors driving the growth are the rising population resulting in growing food requirements & non-gene editing applications, including diagnostics & antiviral, among others.

Moreover, the continuous investments & research conducted by pharmaceutical companies, education institutions, and governments across the biotechnology & biopharmaceutical industries are the major factors augmenting the growth of the Global CRISPR Gene Editing market. For instance:

Furthermore, over the past few years, CRISPR technology has observed tremendous advancements & enabled researchers to manipulate human, plant, and animal genomes in unprecedented ways. With the new emanating CRISPR-Cas systems, including spCas9-NG, base editing, xCas9, Cpf1, Cas13, and Cas14, scientists predict that this technology has the potential to revolutionize different industries such as agriculture, biomedicine, and bioenergy.

Additionally, scientists believe that there is still a lot to uncover about CRISPR technology in the future. CRISPR could be beneficial in several areas, including correcting genetic disorders that cause diseases like Hypertrophic cardiomyopathy (HCM), a heart condition that affects approximately 1 in 500 people worldwide, as per a study published in PLOS One. In 2017, researchers from Oregon Health and Science University showed impressive results from an experiment that employed CRISPR to delete one of the defective genes in numerous viable human embryos, exhibiting the possibility of using CRISPR technology to eradicate this heritable disease. In the future, CRISPR can eliminate the microbes that cause disease.

Besides, the substantial investments by biopharmaceuticals & biotechnology companies made in the fields of gene therapy, genome engineering, drug discovery, molecular research, and clinical research are promoting the development of industry-specific CRISPR gene-editing technology. For instance:

Therefore, the CRISPR gene-edited technologies opened up several new horizons for researchers to develop multiple crop varieties that have increased yields, resilience against climate change, and a better response to fertilizers.

Impact of COVID-19 on the Global CRISPR Gene Editing Market

The COVID-19 pandemic prompted pharmaceutical & biotechnology companies to invest in the research & development of vaccine production. Thus, the rising demand for vaccines & potential antiviral candidates has brought CRISPR gene-editing technologies to the forefront.

Moreover, as compared to the conventional diagnostics & treatment methods, genome editing tools such as CRISPR-Cas 12/13-based SHERLOCK, CARVER, ribozymes, RNAi silencing, and aptamer therapies played a vital role during the research process in the COVID-19 outbreak. These advanced tools & treatment methods have proven to be shorter & easier diagnosis procedures for targeted virus detection & killing.

Here, the CRISPR Products type dominates the Global CRISPR Gene Editing market and is anticipated to remain dominant during the forecast period, owing to the presence of CRISPR pooled libraries that consist of thousands of plasmids based on library type, species, and library size.

In addition, kits & enzymes play a pivotal role in the CRISPR Gene Editing market on account of performing in vitro cloning of large genes of DNA fragments without the limitations imposed by common restriction enzymes or PCR fidelity.

Furthermore, the rising adoption of Cas9 for specific genome disruption & replacement in a flexible & simple system by biopharmaceutical companies & clinical development in research institutes is further driving the growth of the product segment in the CRISPR Gene Editing market.

Of them all, the biomedical segment held a considerable share in the CRISPR Gene Editing market on account of tremendous development in cell & gene therapy, drug discovery, and diagnostic domains across the globe. The discovery & development of CRISPR technology for gene therapy is expanding rapidly to combat hereditary disorders & other chronic ailments such as cancer & immune treatments. For instance:

Moreover, the discovery of new Cas Nucleases such as Cas7-11 has significantly boosted the gene therapy segment, making it possible to develop CRISPR therapies for a wide range of life-threatening ailments.

Among all, Pharmaceutical & Biopharmaceutical companies dominate this segment, followed by biotechnology businesses. The companies are incorporating numerous CRISPR gene editing products & services for the treatment & screening of genetic disorders.

Moreover, the biopharmaceutical companies are significantly ensuring the growth of the CRISPR Gene Editing market by researching the gene-editing technology across different verticals & out-licensing the CRISPR platform. Additionally, biomedical & mammalian cell line research is constantly thriving at research centers, driving their use of CRISPR gene editing tools & platforms as a fundamental component of their research.

Of all the regions, North America is home to many legacies & emerging companies in the field of CRISPR gene editing that are currently investigating drug candidates in clinical research. Some of the leading contributors to the North America CRISPR Gene Editing market are Abcam Plc., Applied StemCell Inc., Agilent Technologies Inc., Cellecta Inc., CRISPR Therapeutics AG, etc.

Moreover, the research & development activities growing awareness of gene therapy & substantial government funding to boost the clinical research processes for various rare diseases are the preliminary factors that have positively impacted the sales of CRISPR gene editing in the region. The National Human Genome Research Institute and the National Institute of Health are the medical research agencies responsible for medical & genome research in the USA.

Key Driver: Prevalence of Genetic Disorders & Use of Genome Editing to Boost the Market Growth

The prevalence of genetic disorders has been increasing over the years across the globe. Some of the most prevalent are thalassemia, down syndrome, cystic fibrosis, and sickle cell anemia. For every 10,000 live births globally, 4.4 cases of thalassemia are reported. According to the Thalassemia International Federation, about 7% of the population experience hemoglobin-associated conditions, around 70% have sickle cell anemia, and the remaining develop thalassemia or other blood disorders.

Potential applications of CRISPR gene editing elicit ethical concerns & repercussions of gene editing, raising skepticism about whether CRISPR gene editing should be opened to the public for cosmetic purposes or only be limited for medical reasons. At present, CRISPR-modified animals & insects are regulated under a coordinated framework formed in 1986 for the Regulation of Biotechnology by the USFDA, U.S. Department of Agriculture, and the Environmental Protection Agency.

Another negative aspect is CRISPR could be used for bioterrorism. In 2014, a science article pointed out the ecological impact of using gene drives. As a result of crossbreeding, gene-modified traits could be extended beyond the target population to other organisms. Therefore, the impact on gene diversity of the target population is another major concern.

Emerging markets are expected to offer significant opportunities for the growth of the genome editing market on account of growing research & development funding for various research organizations. For instance, the biotechnology companies in Brazil are majorly focusing on the development of small molecules & biologics, cell therapies, tissue engineering, regenerative medicines, and genetic & molecular testing.

Subsequently, leading players in the genome editing market are strategically focusing on partnerships & collaborations to strengthen their manufacturing facilities as well as distribution network in the country.

A. The Biomedical segment is anticipated to emerge as an opportunity area for the leading players in the market during the forecast period.

A. The Rising Government Investments, as well as the Utilization of Genome Editing Techniques for Prevalent Genetic Disorders, are the growth opportunities in the market.