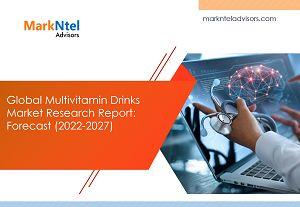 Multivitamins drinks are a variety of functional drinks enriched with a diverse range of nutrients like vitamin B12, vitamin A, vitamin B, vitamin C, vitamin D, & others. These drinks are meant to serve the same purpose as dietary supplements but in beverage form. Although there has not been proven evidence of these multivitamins in preventing chronic diseases or cancer, the utility of such drinks in better absorption of nutrients and prevention of muscular generation is quite evident. Proportionate consumption may result in better energy levels & an improved immune system.

The Global Multivitamin Drinks Market is projected to grow at a CAGR of around 6.8% during the forecast period, i.e., 2022-27. The market is primarily driven by the growing prevalence of lower absorption levels of nutrients among people, promulgating the demand for multivitamin supplements in numerous forms. Since consumers find beverages the most convenient mode of consumption, multivitamins drinks are gaining traction globally.

Another prominent factor stimulating the Global Multivitamin Drinks Market growth is skyrocketing demand for immunity booster products in all age groups, particularly among the geriatric population. Besides, the growing health consciousness among people & their inclination toward multivitamin drinks to attain the nutritional requirements of the body is also stimulating the industry and generating growth opportunities for the players to increase their production & distribution capacities to cater to the rising demands across locations.

Here, Sports Drinks are anticipated to gain substantial popularity & consumer base across locations and drive the Global Multivitamin Drinks Market during the forecast period. The market is driven by the growing health consciousness among people and their inclination toward sports activities to maintain a healthy lifestyle. It, in turn, is augmenting the demand for multivitamin drugs like sports drinks to enhance their overall strength.

Besides, a rise in the number of fitness centers & gyms, especially across urban setups, is also demonstrating higher demands for sports drinks, particularly by the younger generations. In addition, the growing propensity towards physical & mental fitness that requires adequate replenishment and immediate need to hydrate the body after rigorous workouts are augmenting the demand for rejuvenating sports drinks enriched with multivitamins, curating the fundamentals underlying the market dynamics through 2027.

Online stores are expected to hold a considerable share in the Global Multivitamin Drinks Market during the forecast period. This growth attributes to the increased internet penetration paired with the swift transitioning of existing stores to their online version, backed by high support & encouragement by the governments of different countries promoting digitalization. It, in turn, is instigating the leading players to make paradigm shifts to these platforms, emerging as a primary source for shopping.

Besides, since such platforms offer plenty of benefits & services to the customers like extensive brand variety, budgets, options, deals & offers, alongside easy finances & doorstep deliveries, among others, driving the need to stock up on multivitamin drinks and attract a substantial consumer base. The same aspects shall also make a positive influence on the industry, leading it to substantial growth in the coming years. Furthermore, the extensive availability of such nutritional drinks free from artificial colors, flavors, and sweeteners over online stores has gained traction owing to the changing taste preferences among adults.

Among all, Asia-Pacific acquired the largest market share in recent years and is anticipated to prevail in the same dominance during the forecast period. It principally owes to the rising prevalence of malnutrition across the region especially, in South Asia. For instance,

Backed by the support from the government through investment in dietary supplements or fortified foods & beverages to cater to the undernourished population, the industry shall witness significant growth across Asia-Pacific in the coming years.

Moreover, the prominent players shall also witness the presence of opportunities attracting them to establish manufacturing plants and expand their business portfolio by introducing numerous new variants of multivitamin drinks in the region. Additionally, the inclusion of several new and exotic flavors to these nutritional drinks has made multivitamins consumption more consumer-friendly, shall also attract a substantial consumer base and promulgate the overall industry growth across Asia-Pacific through 2027.

Backed by the high prevalence of an extensive range of energy drinks, sports drinks, & juice concentrates, among others, fortified with several nutrients, including vitamins & minerals, the multivitamin drinks market is set to witness an upswing in demand during the forecast years. Moreover, growing awareness regarding a balanced diet enriched with vitamins & minerals, accompanying higher disposable income, are the other prominent factors driving the market globally through 2027.

Despite the numerous factors influencing the market most favorably, it might observe a downfall on the back of the stringent rules & regulations imposed by the government to administer labeling of dietary supplements or fortified drinks, including multivitamin drinks. This aspect might restrain several companies from investing in the multivitamin drinks industry & might affect the overall market in the coming years.

A. The Global Multivitamin Drinks Market is projected to grow at a CAGR of around 6.8% during 2022-27.

A. Escalating demand for beverages with high nutrient contents is expected to drive the Global Multivitamin Drinks Market during 2022-27.

A. Sport drinks is anticipated to emerge as an area of remunerative opportunities for the leading players in the Global Multivitamin Drinks Market during the forecast period.

A. ‘Asia-Pacific’ is expected to dominate the Global Multivitamin Drinks Market during 2022-27.

A. Higher cost of Multivitamin drinks and Stringent Government Regulations for their labeling are the possible restraints affecting the growth of the Global Multivitamin Drinks Market during 2022-27.