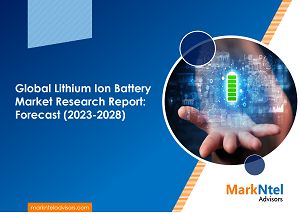 A Lithium-ion or Li-ion battery is a type of rechargeable battery that utilizes the reversible reduction of lithium ions to store energy. It is the predominant battery type used in portable consumer electronics and electric vehicles. Lithium-ion batteries are currently used in most portable consumer electronics, such as cell phones and laptops, owing to their high energy per unit mass relative to other electrical energy storage systems.

The Global Lithium Ion Battery Market is projected to grow at a CAGR of around 25.0% during the forecast period, i.e., 2023-28. The rapidly growing renewable energy sector has swiftly led to the persistent adoption of lithium-ion batteries in recent years. The large-scale incorporation of these batteries in several new applications has instigated investors to bring their focus to R&D and make a substantial investment toward the advancements.

The market behemoths such as Samsung SDI, LG Chem Ltd, Hitachi Chemical Co., Ltd, Johnson Controls International PLC, and Panasonic Corporation are making relentless investments in setting up plants and manufacturing units to expand their portfolios. Besides, the companies constantly seek collaboration with government agencies to level up their market presence. Apart from the key players, the governments worldwide willing to sponsor energy and infrastructural development projects are anticipated to contribute to the market expansion in the coming years. For instance,

The preference for lithium-ion batteries has largely been demonstrated by automobiles and consumer electronics, primarily because of their longer shelf life and higher energy density. Since the cost of fossil fuels and gasoline has witnessed a surge in the past few years, electric vehicles are emerging as a better alternative to ICE vehicles. And, with more electric vehicles coming on-road, the demand for these batteries is likely to enthrall in the forecast period.

Here, the Lithium Cobalt Oxide segment acquired the lion’s share in the market during the historical period and is anticipated to prevail in the same dominance during the forecast period. It largely ascribes to the remarkable properties of lithium cobalt oxide batteries that facilitate high current charging and discharging and enable devices to release relatively more energy in a shorter span. Besides, these batteries with high discharge rates exhibit continuous discharge rates of up to 50C and pulse discharge rates of up to 150C, making them more opt-for, among others.

Moreover, with frequent deployment in portable electronic devices, digital cameras, and personal computers, the electronics industry emerges as one of the prominent consumers of lithium-ion batteries, predominantly lithium cobalt oxide. Further, with broad applications in telecom towers and home inverters that require an uninterrupted power supply, these batteries have begun to gain popularity worldwide.

Asia-Pacific demonstrated a noticeable market growth with a substantial adoption exhibited by China during the historical years and is anticipated to prevail in the same trend during the forecast period. As per our analyst, China, aiming to reduce carbon footprints across cities, is expected to register maximum adoption of lithium-ion batteries in the coming years. Moreover, China, followed by South Korea, Australia, Japan, and India, relentlessly encourage electric vehicles through their regulatory frameworks and subsidized initiatives.

Other than this, the electrification of delivery vehicles and pickups has further prompted the need for more lithium-ion batteries across the region. Moreover, with major automakers in the commercial segment investing in hybrid drive systems across different model ranges, the electric or plug-in hybrid vehicle is expected to witness a significant surge in their sales. Consequently, the need for more lithium-ion batteries is likely to surface in the coming years, making the market witness massive expansion. For instance,

Key Driver: Frequent Adoption of Li-Ion batteries in Hybrid and Plug –in Vehicles

Most of the market expansion can be accredited to the growing adoption of electric or hybrid vehicles prevailing worldwide. The major companies are investing in mobility solutions that are not just sustainable but also ultra-modern in their techniques. This factor has led to a swift increase in the number of electric vehicles with a common goal of becoming carbon neutral. With companies like Tesla and BYD coming up with high-powered electric vehicles, the market is set to receive a major push in the coming years. Hence, being the essential power source for electric and plug-in vehicles, lithium-ion batteries have gained traction in recent years, which, in turn, accelerated market growth.

As per a report by the Environmental Protection Agency published in July 2021, there have been 254 fire incidents at 64 waste facilities because of lithium metal or lithium-ion batteries. Since consumed batteries contain hazardous chemicals, such as acids and heavy metals, including mercury and lead, it is crucial to keep them in watertight containers and store them away from other combustible materials. Besides, it is equally important to keep a Class D extinguisher and sand nearby as a precautionary measure in the case of a fire.

A. The frequent adoption of Li-Ion batteries in hybrid and plug –in vehicles and consumer electronics is expected to boost the market growth during the forecast period.

A. Lithium Cobalt Oxide Segment is anticipated to emerge a leading type, among others in the Lithium Ion Battery Market during the forecast period.

A. Asia –Pacific is projected to emerge as an area of remunerative opportunities for the leading players in the Lithium Ion Battery Market during the forecast period.

A. Escalating transportation and storage concerns of consumed batteries are emerging as a key restraint to the market growth in the forecast period. 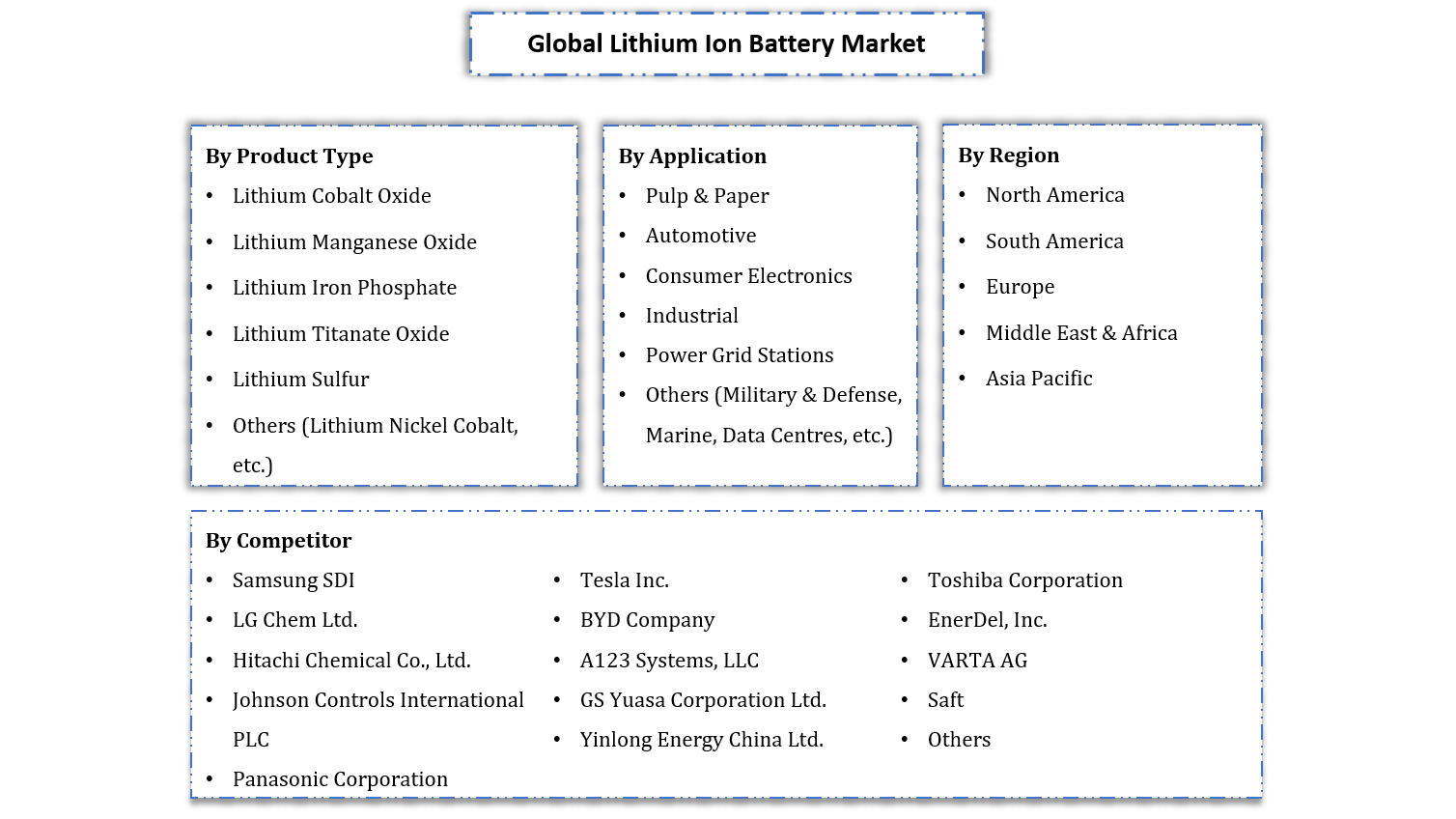