The growing regulatory & societal pressures are encouraging industries towards adopting more sustainable energy sources like wind & solar energy. Along with this, the popularity of portable electronic devices is increasing continuously, which, in turn, is infusing the need to store large energy volumes in rechargeable batteries that should be both long-lasting & affordable.

Lithium-sulfur batteries are among such promising battery systems gaining immense popularity owing to their low costs, lightweight, rechargeability, & high capacity, along with the high energy density of sulfur & its abundant availability. The low atomic weight of lithium makes these batteries store more energy than the lithium-ion battery. With these excellent characteristics, lithium-sulfur batteries have been adopted across the manufacturing, automotive, & electrical industries worldwide.

The Global Lithium-Sulfur Battery Market is anticipated to grow at a CAGR of around 72% during the forecast period, i.e., 2021-26. The growth of the market is driven primarily by the mounting inclination of many governments worldwide toward electrification in the transportation sector, coupled with their various initiatives for promoting the use of electric vehicles to curb carbon emissions.

Besides being lighter in weight & cheaper than their alternatives, lithium-sulfur batteries also offer safety advantages. These features associated with lithium-sulfur batteries have enabled their extensive utilization in satellites, drones, & military vehicles and are projected to contribute to the overall market growth during 2021-26. Moreover, with the development of flying taxis & other short-range flights in the future, lithium-sulfur batteries will have lucrative growth opportunities across the aviation sector over the forecast years.

Furthermore, the surge in temperature levels worldwide due to global warming is encouraging major countries to phase out thermal power plants and increase their investments in renewable energy sources, including solar & wind farms. This increasing demand for renewable energy power generation shall further augment the global market growth during 2021-26.

In 2020, the Covid-19 pandemic severely disrupted the global economy by putting a halt to several business activities globally. It was due to countries that imposed nationwide lockdowns to curb the virus spread, which resulted in the shutdown of manufacturing units, transportation restrictions, disruptions in the supply chain & manufacturing activities, and an overall adverse impact on the Global Lithium-Sulfur Battery Market. Moreover, limitations in imports of raw materials from other countries led to the improper distribution of resources worldwide.

However, substantial investments by governments & private sectors in the renewable energy sector post the upliftment of lockdown significantly fueled the demand for highly efficient energy storage systems, such as lithium-sulfur batteries. With rising awareness about using environmentally friendly products among people, the adoption of lithium-sulfur batteries is likely to increase dramatically across several end-user verticals worldwide. Many battery manufacturers & research institutes are taking several initiatives and investing massively in the R&D of lithium-sulfur batteries to make them commercially available. 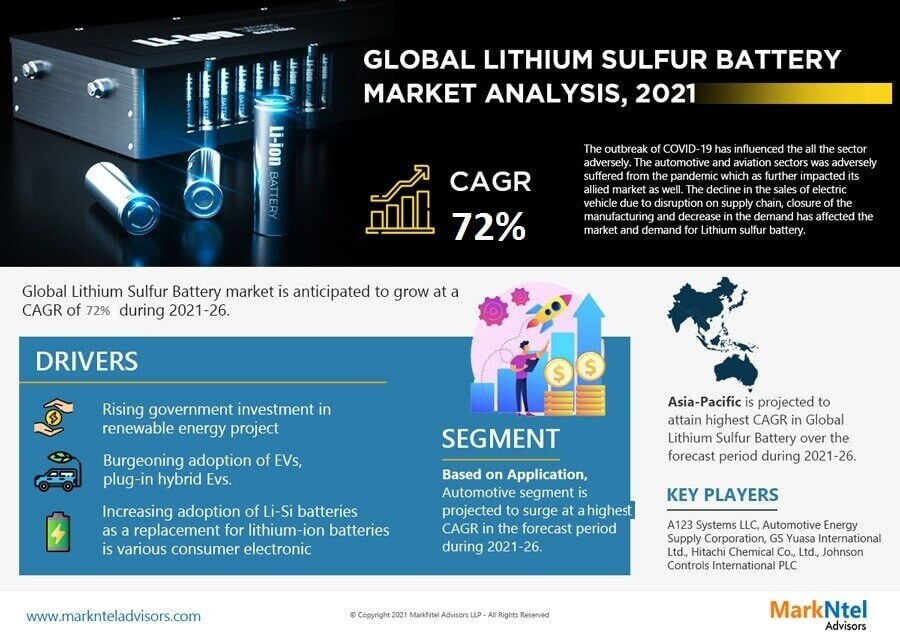 Of them all, the aviation sector is projected to acquire the largest share of the Global Lithium Sulfur Battery Market over the forecast years. It is due to the increasing usage of lithium-sulfur batteries in military aircraft since they require high energy storage to operate.

Weight is of the utmost importance to any aircraft. The heavier it is, the more energy it requires for its functioning. Since lithium-sulfur batteries are significantly lighter than lithium-ion batteries, it makes them an ideal storage system for airplanes.

Moreover, the market growth across the aviation industry also owes to High Altitude Long Endurance (HALE) UAVs used for numerous purposes, including weather forecasting, surveying, & mapping. These aircraft are designed to operate continuously for months without the need to land in order to offer constant coverage to end-users.

On the other front, the global market is expecting robust growth in the automotive sector during 2021-26, owing to the burgeoning demand for electric vehicles across several developed nations worldwide. The implementation of various government policies toward reducing the usage of fossil-fuel-based vehicles, along with the "zero-carbon" targets set by regulatory bodies across different regions, are projected to escalate the demand for electric transportation and, consequently, boost the global market in the coming years.

According to the International Energy Agency, sales of electric vehicles topped 2.1 million globally in 2019, exceeding 2018's numbers. Electric vehicles accounted for 2.6% of global car sales and about 1% of global car stock in 2019, registering a 40% year-on-year surge. The rapidly increasing innovations in electric vehicles are resulting in the mounting demand for efficient batteries, thereby potentially creating lucrative growth opportunities for the global market in the automotive sector through 2026.

Here, Manufacturers are likely to account for the largest share of the global market. The need for high-capacity batteries is significantly increasing among the automotive OEMs, which, in turn, is fueling the demand for lithium sulfur batteries. Besides, the mounting adoption of plug-in hybrid electric vehicles is another crucial aspect contributing to the market growth.

As lithium-sulfur batteries are lightweight, they make the whole aircraft lighter. It, in turn, requires less energy to power the motors to keep the aircraft airborne. Moreover, it also offers the potential to surge the payload for the aircraft, thereby enhancing its capability & reducing overall operational costs. Hence, the surging developments number of aircraft for various purposes shall also contribute to the demand for lithium-sulfur batteries from manufacturers over the forecast years.

Geographically, of all regions, North America is set to account for the largest share in the Lithium Sulfur Battery Market during 2021-26. The regional market growth attributes to various innovations in the energy & power sector and the emerging trend of energy storage systems owing to increasing inclination toward using renewable energy sources, especially in the US & Canada.

Moreover, various government initiatives toward promoting electric mobility to curb carbon emissions, coupled with the extensive presence of electric vehicle manufacturers like Tesla, have encouraged the need for stable & low-cost battery packs across North America. Besides, leading organizations like Microsoft, Google, Apple, & others have positively influenced the need for emergency power backup systems for huge servers to offer better services to customers. Hence, these aspects are projected to augment the Lithium Sulfur Battery Market in North America during 2021-26.

AESBs based on Li-ion intercalation chemistry is responsible for around 50% of the cost of electric vehicles and have been stalling the electrification of road transportation. Sulfur is one of the most abundant elements found on the Earth and has an average price of $0.25/kg, which is less than a hundredth of that of LiCoO2 ($40/kg). Also, it is more cost effective to recycle sulfur than the metal elements in conventional cathode materials because of sulfur’s easier solubilization and sublimation. Therefore, lithium sulfur batteries are cheaper than lithium ion batteries and can be used in wide-range of application.

Lithium-sulfur batteries have a highly complex working mechanism, which is one of the key aspects refraining these batteries to get commercialized. The primary issues to their functioning are the low electrical conductivity & huge volume changes associated with sulfur cathode. In addition to this, the limited projected volumetric energy density of lithium-sulfur batteries makes it difficult to compete with lithium-ion technology for applications where there is limited space like electric passenger vehicles. Hence, these aspects are likely to hinder the expansion of the Global Lithium Sulfur Battery Market during 2021-26.

A. The Global Lithium Sulfur Battery Market is forecast to grow at a CAGR of around 72% during 2021-26.

A. The aviation sector is projected to hold the largest share of the Global Lithium Sulfur Battery Market in the coming years, which shall create remunerative growth opportunities for the leading companies participating in the global market.

A. The snowballing trend of transport electrification and the mounting demand for safe & efficient clean energy storage batteries are the key factors expected to drive the Global Lithium Sulfur Battery Market during 2021-26.

A. In the coming years, the Global Lithium Sulfur Battery Market is expecting astronomical growth owing to the increasing demand for environmentally friendly products across major end-user verticals worldwide. 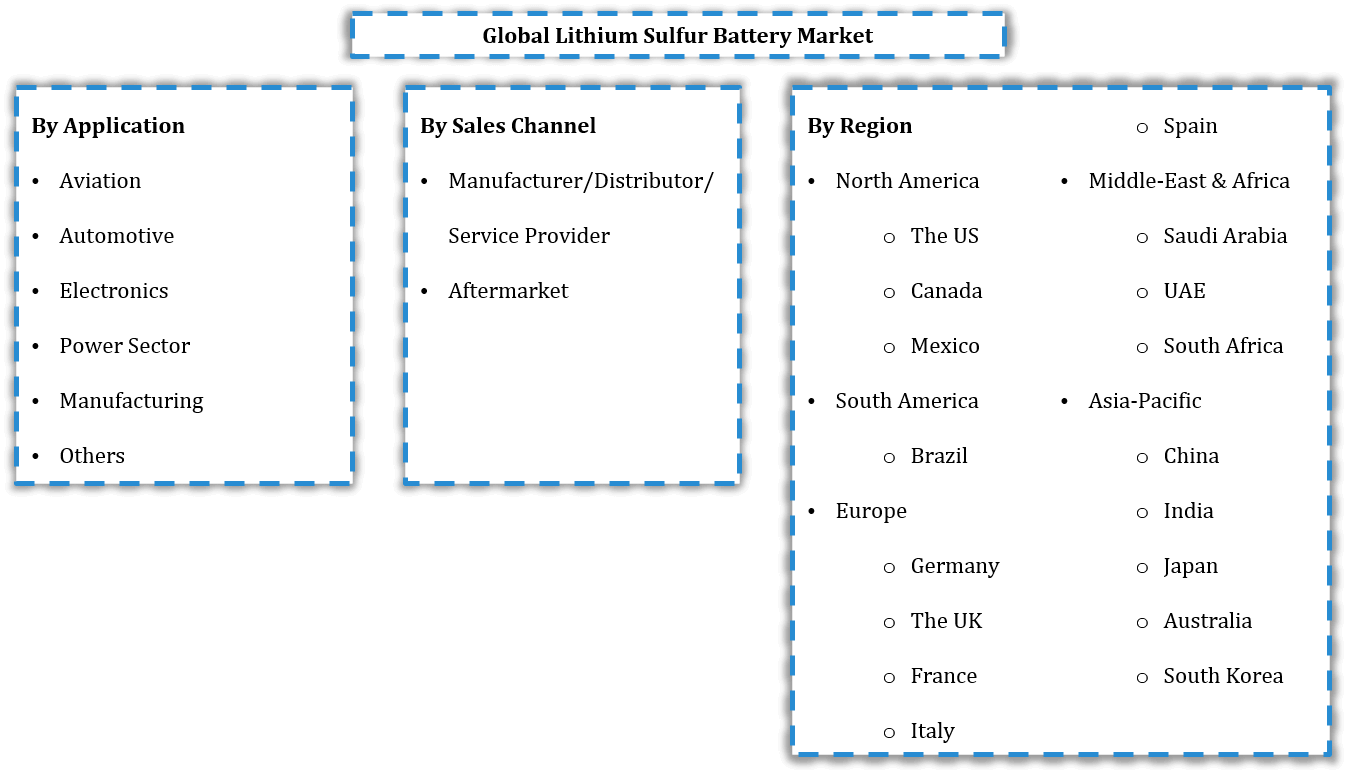