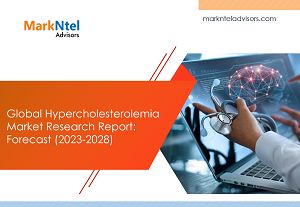 Hypercholesterolemia is a condition in the human body where levels of cholesterol spike abnormally, resulting in higher blood pressure, strokes or heart attacks. Usually stemming from underrated thyroid levels and unhealthy eating habits resulting in chronic diseases such as heart disease, diabetes, and others, it may pose serious life threats. The primary cause, however, may be genetic.

The Global Hypercholesterolemia Market is projected to grow at a CAGR of around 3.2% during the forecast period, i.e., 2023-28. The market is driven by the alarming rise in the prevalence of cardiovascular diseases and chronic disorders such as diabetes, obesity, and others worldwide. Elevated levels of non-HDL cholesterol and LDL in the blood may result in life-threatening conditions, including heart disease and stroke. According to WHO, raised total cholesterol is a major cause of disease burden in both the developed and developing world as a risk factor for ischemic heart disease and stroke. Globally, a third of ischaemic heart disease is due to high cholesterol. Overall, raised cholesterol is estimated to cause 2.6 million deaths (4.5% of total) and 29.7 million DALYS, or 2% of total DALYS.

Along similar lines, The National Center for Biotechnology Information, NCBI cites, globally, 3.00 million people in 1990 and 4.40 million people died from high LDL-C in 2019. The annual burden from deaths and DALYs accredited to high LDL-C increased by 46% and 41% from 1990 to 2019. There was a negative association between SDI and high LDL-C-related age-standardized death and DALY rates when SDI surpassed 0.71 and 0.71, respectively. As such, rigorous research, clinical studies, and trials for treatment leading to effective drugs are observed to be a solid booster to the Global Hypercholesterolemia Market landscape. For instance,

In July 2022, NewAmsterdam Pharma, a clinical-stage business, introduced BROOKLYN, a phase 3 trial designed to evaluate the efficacy of obicetrapib on LDL-C levels in patients with heterozygous familial hypercholesterolemia as an adjunct to maximally tolerated lipid-lowering therapy.

In fact, the number of homozygous familial hypercholesterolemia clinical studies done worldwide grew by 93% between 2016 to 2020, as per clinicaltrials.gov. These aspects are expected to stimulate the market revenue growth during the forecast period.

Based on Disease Type,

Between the two, the Genetic segment acquired the largest market share in the historical period with Familial Hypercholesterolemia (FH) as a common genetic disorder, remained prominent. According to the Centers for Disease Control and Prevention, more than one million people in the U.S. have familial hypercholesterolemia, but unfortunately, only about 30% know about it. Being an inherited disorder, FH makes it crucial to get family members tested in order to find more such cases. Since FH involves gene mutation of those involved in the catabolism of Low-Density Lipoprotein Cholesterol (LDL-C), autosomal dominant inheritance is the common pattern for familial hypercholesterolemia induced by mutations in LDLR, APOB, or PCSK9 genes. As such, cascade testing that involves a diagnosis of FH through genetic testing, a blood cholesterol test, or both, has turned up in recent years, thereby fetching the attention of market players. Moreover, the expanding screening programs for familial hypercholesterolemia and their affordability coupled with the clinical advances of new therapeutics for this disorder have bolstered the market growth in the past few years. Moreover, the steady adoption of diagnostic methods such as the Simon Broome Register (SBR), Dutch Lipid Clinic Network (DCLN), or Make Early Diagnosis to Prevent Early Death (MEDPED) has again led to the industry's ascension in the historical period.

On the geographical front, North America grabbed the maximum market share in 2022 and is anticipated to prevail in the same trend. The dominance of the region is primarily attributed to the growing awareness accompanied by the substantial healthcare expenditure by the respective governments. With more than one million people suffering from Familial Hypercholesterolemia in the US alone, the situation across the region continues to be life-threatening. Besides, recent instances of type-2 diabetes in adults and underrated thyroid levels, when paired with a lack of a wholesome diet, have brought the attention of researchers, & healthcare service providers and compelled them to come up with more effective solutions for the condition and, derived disorders in the past few years. For instance,

In July 2022, VERVE-101, a novel, investigational gene editing medicine by Verve Therapeutics, got its first patient. The aim was to design a single-course treatment that permanently turns off the PCSK9 gene in the liver, thereby reducing disease-driving low-density lipoprotein cholesterol (LDL-C). Being a clinical-stage biotechnology company, based in the U.S., the brand is highly focused on promoting heart wellness.

The paradigm shifts in the treatment methods, paired with the rapid advancement in gene therapy technology in recent years, have revolutionized the way FH patients were treated earlier. Genetic therapies are being constantly developed for Familial Hypercholesterolemia and may bring absolute LDL-C dipping. Unlike existing lipid-lowering therapies, exhibiting difficulty in achieving lipid target levels in FH patients, Gene Therapy has shown excellent therapeutic potential. With further optimization of delivery efficiency, immunogenicity, and the precision of gene therapy, the market players may maximize their revenue in the coming years.

A. The Hypercholesterolemia Market is projected to grow at a CAGR of around 3.2% during 2023-28.

A. Genetic segment is anticipated to emerge as an area of remunerative opportunities for the leading players in the Hypercholesterolemia Market during the forecast period.

A. Globally, North America would provide lucrative prospects for the Hypercholesterolemia Market in the years ahead.

A. Constant advances in genetic therapies for FH bring lucrative prospects for the market players through 2028. 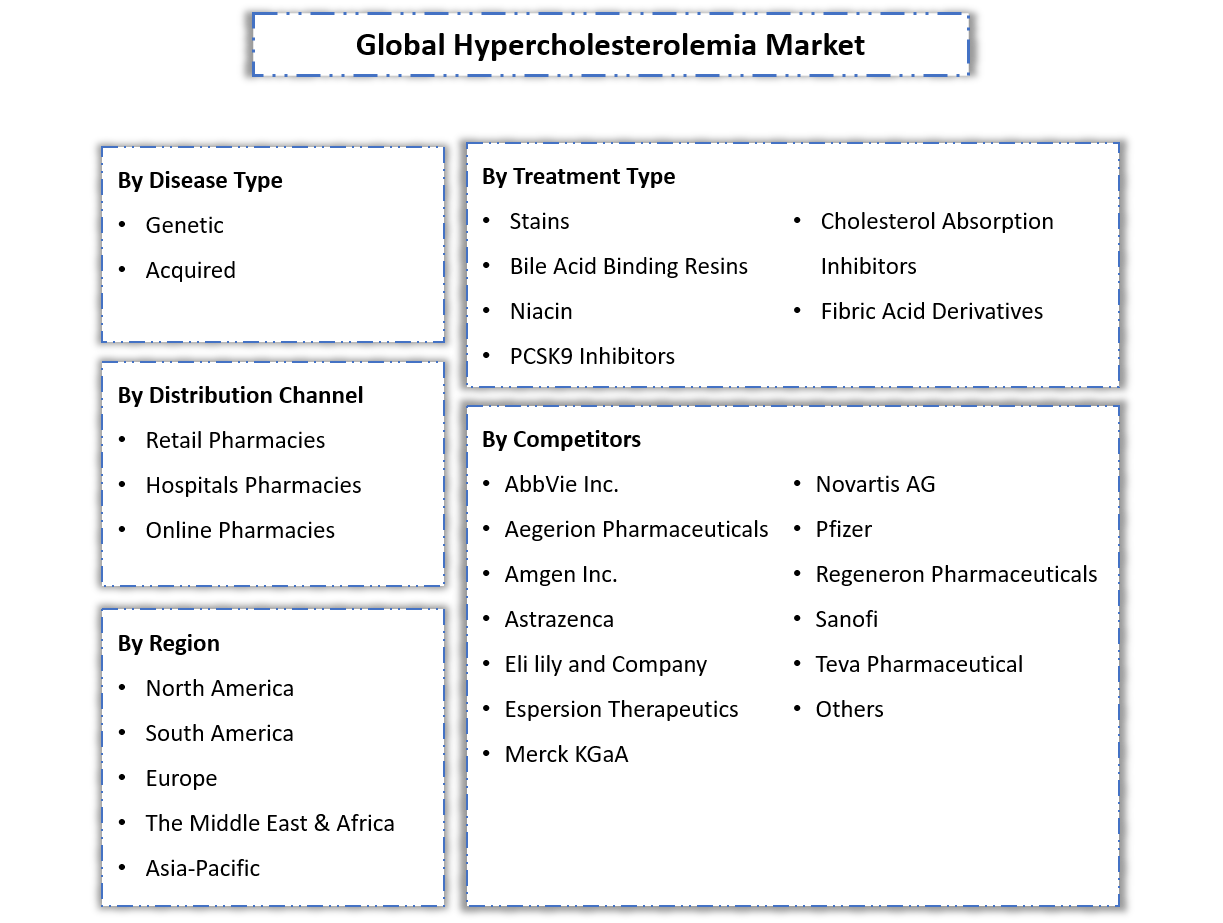