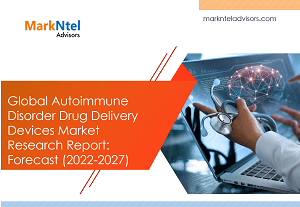 Autoimmune Disorder Drug Delivery Devices are specialized devices used for the delivery of drugs or therapeutic agents via a specific route of administration to treat immune system abnormalities in humans. The rise in autoimmune diseases caused by sedentary lifestyles or over activities has led to severe immune system disorders in today’s era. To selectively target immune cells in peripheral tissues or diseased tissues, the medical practitioners & government are enormously supporting huge R&D investments to focus on new approaches in drug delivery. This has led to an increase in the demand for autoimmune disorder drug delivery devices globally.

The Global Autoimmune Disorder Drug Delivery Devices Market is projected to grow at a CAGR of around 16.89% in terms of revenue during the forecast period, i.e., 2022-27. Increasing environmental triggers such as viruses & bacteria, use of chemical fertilizers, rising exposure to harmful ultraviolet rays, and nutritional deficiencies have resulted in the development of autoimmune diseases such as juvenile dermatomycosis & rheumatoid arthritis, among many others. According to the National Stem Cell Foundation (NCSF), globally, around 4% of the population is affected by one of more than 80 different types of autoimmune diseases.

Moreover, the rising awareness among the regional governments to minimize the health risks associated with autoimmune diseases to control the fatality rates globally has driven the interest of medical practitioners to invest in R&D activities for the development of effective drug delivery systems & devices. In 2019, under the EU’s Innovative Medicine Initiative, the European Union-funded a USD89.61 million project named ‘Taxonomy, Treatments, Targets, and Remission, or 3TR'. The project aims to increase therapeutic success, reduce the risk of avoidable side effects in patients that are unlikely to benefit from the drugs prescribed, reduce the healthcare cost, and improve the quality of life.

A significant increase in the adoption of self-injectable devices for the treatment of autoimmunity disorders such as diabetes etc., combined with the rapid surge in hospital-acquired infections, high medical costs, and longer wait hauls, have accelerated the shift towards the use of autoimmune disorder drug delivery devices in households globally. Moreover, various companies such as Becton, Dickinson, and Insulet Corporation have launched self-injectable devices to bring economic benefits to both patients & healthcare systems. For instance, pressure-assisted auto-injectors by Antares Pharma are a form of parenteral drug delivery to address acute & chronic medical needs such as rheumatoid arthritis, allergic reactions, psoriasis, and other therapies.

The outbreak of the Covid-19 pandemic made a relatively positive impact on the Global Autoimmune Disorder Drug Delivery Devices market The burgeoning requirement for drug delivery devices in hospitals & households to inject immunity boosters to COVID infected patients globally fueled the market demand for drug delivery devices. According to the National Institute for Health Research, 'the spread of SARS-COV-2 has created long-term autoimmune complications, including the Guillain-Barre-Syndrome, which has spurred the demand for the development of autoimmune disorder drug delivery devices for enhanced patient recoveries in the global markets.

Further, the healthcare & medical sectors experienced robust growth amidst the pandemic, despite the severe effects on nearly every industry worldwide. Moreover, with the increasing spread of the virus, the need for Drug Delivery Devices has been propelling exponentially. Still, the market had to face slight delays & limitations because of the imposition of lockdown & restrictions on logistics. However, the manufacturing of the devices is expanding robustly. Furthermore, with the gradual upliftment of lockdown & ease of norms, the Global Autoimmune Disorder Drug Delivery Devices market shall increase its production & supply and experience rapid growth in the coming years. 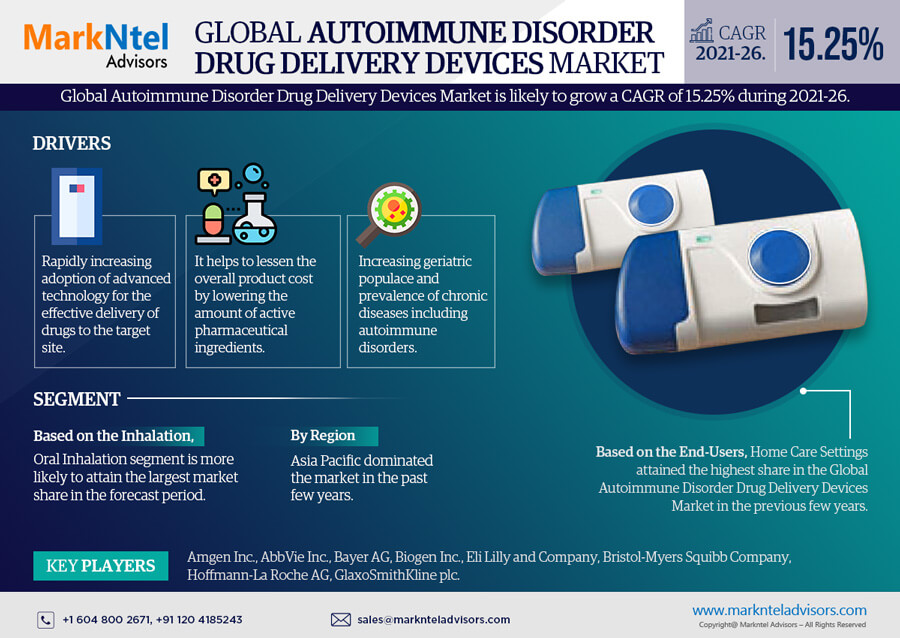 Of them all, Rheumatoid Arthritis disease is expected to acquire a prominent share in the Global Autoimmune Disorder Drug Delivery Devices market from 2022 to 2027. The rising geriatric population is one of the major factor that contributes to the growth of rheumatoid arthritis disorders across the world. According to Administration on Aging (AoA), an operating division of the U.S. Department, 54.1 million of population was older than 65 years, as of 2019.

In addition, as per the US Department of Health & Human Services (HHS), autoimmune diseases represent the fourth-largest cause of disability among women in the US & are the eighth leading cause of death for women aged between 15 to 64. Moreover, the increasing awareness & rising healthcare expenditure & access to quality drugs for the poor are some of the factors supporting the growth of autoimmune disorder drug delivery devices for rheumatoid arthritis treatment globally.

Among them, Prefilled Syringes hold a prominent share in the market, owing to the rising demand for convenient & safe-filled syringes over conventional glass vials for parental drug packing. Moreover, a growing number of biosimilars & biologics in the market are supporting the growth of prefilled syringes across the world. In addition, technological advancements, rising adoption of self-injecting parenteral devices, and supportive government regulations are propelling the growth of prefilled syringes for autoimmune disorders.

Of them all, the Hospitals dominated the Autoimmune Drug Delivery Device market, owing to the increasing number of multispecialty & community hospitals, especially in emerging countries. Furthermore, the same trend is expected to continue in the coming years due to the countries' increasing need for hospitals to meet the needs of the population. For instance, India is expected to have 2,500 new hospitals by 2024, as per Niti Aayog, which would subsequently impact the positive growth of drug delivery devices in the market.

Moreover, the growing emphasis of healthcare agencies & government on the routine diagnosis of patients and their timely treatment has resulted in growing awareness among the population, which ultimately propels the market growth during the forecast period.

Of all the regions, North America gained a significant share in the Global Autoimmune Disorder Drug Delivery Devices market from 2022-2027 on account of rising research & development in the pharmaceutical sector as well as the growing prevalence of chronic ailments in the region. Furthermore, rapid industrialization & urbanization have contributed to an increase in adverse environmental conditions across several fields, including high temperatures, toxic chemical releases from industry, land degradation, expanding exploration activities, and lower quality & quantity of agricultural products.

This has impacted the natural living conditions of humans, resulting in nutrient deficiencies, toxic air quality, water contamination, etc., and has majorly supported the growth of autoimmune diseases in North America. According to the National Stem Cell Foundation (NCSF), autoimmune disease represents the third most common cause of chronic illnesses in the United States.

The selection of T-cells with increased affinity to self-antigens, and latent viruses, which result in the aging of the immune system, are the major factors contributing to an increase in autoimmune disorders in the elderly age population globally. According to the World Health Organization (WHO), the number of people aged over 60 is expected to nearly double from 12% to 22% by 2050.

Furthermore, globally, the aging population & increased immune disorders such as Alzheimer's Disease, Rheumatoid Arthritis, diabetes, etc., combined with the decrease in gastric pH, which limits drug absorption, are leading to an increase in demand for autoimmune disorder drug delivery devices.

Autoimmune disorder drug delivery devices are regulated across different countries through various regulating bodies. The ISO standards for the prefilled syringes comprise several additional requirements for cGMP regulations, such as stability testing, special testing requirements, reserve samples, and other QSR regulations like purchasing controls, design controls, and corrective & preventive actions, among others. Moreover, due to these stringent regulations, companies face difficulty & delays in launching new products for autoimmune drug delivery. Furthermore, the product recalls of drug delivery devices leads to the temporary disruption in the production & distribution of the devices, which could be considered as the obstruction for market growth in the forecasted years. For instance, in 2021, Cardinal Health issued a nationwide recall of approximately 267 million Monoject Flush Prefilled saline syringes.

A. The Global Autoimmune Disorder Drug Delivery Devices Market is projected to grow at a CAGR of around 16.89% from 2022-27.

A. The pre-filled syringe is anticipated to emerge as an opportunity area for the leading players in the market during the forecast period.

A. The growing product approvals of Biologic drugs or Biosimilar as well as the upsurge in public-private funding for target research activities would drive the growth of the Autoimmune Disorder Drug Delivery Devices Market.

A. Due to the outbreak of Covid-19, there has been a surge in the research & development of pharmaceutical & biotechnology sectors, which subsequently led to the development of vaccines & drugs to treat immune responses as well as boost the immunity of the human body. Further, the rising number of autoimmune biologics would positively impact the Autoimmune Disorder Drug Delivery Devices Market.