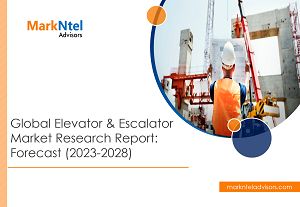 Escalators are moving staircases designed to carry people between two successive floors of a building or structure. Escalators typically consist of interlocking steps, that are powered by an electric motor and a system of chains and gears that enables easy movement of steps in an escalator. This entire mechanism is contained in a set of trusses that connects the floors.

The Global Elevator and Escalator Market is projected to grow at a CAGR of around 6.0% during the forecast period, i.e., 2023-28. Most of the market expansion can be attributed to the rapid urbanization worldwide, resulting in more erection of buildings and modernization of age-old infrastructures in the coming years. According to the World Bank, currently (6 Oct 2022), 56% of the world’s population accounts for around 4.4 billion inhabitants resides in cities. In fact, the urban population is on the verge of folding itself by 2050 to the extent that nearly 7 of 10 people will be living in cities.

Given the limited land area available for constructing new homes in order to inhabit a pool of migrants from the countryside to cities, the development of high-rise buildings has gained momentum in the past few years. With a massive flat count and number of floors often exceeding 20, it is next to impossible to rely on the conventional stairs for the commute. Thus, the inevitable need to deploy elevators in these high-rise buildings, nearly two or three in one of them alone, is anticipated to drive the adoption of escalators in the forecast period. Further, rapid commercial facilities expansion in terms of rise in the number of malls, shopping centers, cinemas, restaurants, and many more have demonstrated the adoption of more elevators and escalators in recent years and is likely to strengthen in the coming years.

Moreover, considerable geriatric demography coupled with the differently-abled population has necessitated the deployment of elevators in homes as well as workplaces, owing to their inability to walk through stairs. Similarly, with multi-story structures, hospitals have begun to deploy escalators in order to ensure patient safety and easy transfer from one floor to another. These aspects are predicted to maximize the incorporation of elevators and escalators in most infrastructures, thereby contributing to market expansion in the coming years.

Further, the changing dynamics in developing countries, in terms of urban infrastructure growth, including metro rail projects, schools, and airports, again push the market ascension in the forecast period. Similarly, the advent of energy-efficient elevators and escalators would provide lucrative prospects for the Global Elevator and Escalator Market in the years ahead.

With the advent of advanced technologies such as the Internet of Things (IoT) and its integration into elevators & escalators, manufacturers have maximized their revenues in the historical years. The integration has led to the smooth functioning of these setups in terms of gathering, analyzing, and exchanging data and maintaining entry and exit-related records. Other than this, IoT has enabled elevators and escalators to anticipate traffic and respond in real time with minimal error. These advantages have compelled investors and manufacturers to integrate such products with cutting-edge technologies, which, in turn, has led to market enlargement in the historical period. For instance,

Between the two, the Escalator segment is expected to grow substantially and emerge as the fastest-growing category in the market during the forecast period. It owes principally to the higher installation rate witnessed by the escalators, especially in the Middle East and Asian countries, owing to the higher infrastructural development, such as aerospace, entertainment, etc., in the past few years. Another factor driving the demand for escalators is the swift inclination of facility owners toward installing efficient elevators entwined with the growing awareness regarding the benefits of these varieties, including less energy consumption, smoother rides, high speeds, & the capability to serve high-rise buildings like skyscrapers. Moreover, their long vertical distance traveling abilities make them the suitable for mid-rise, high-rise, & even ultra-high-rise buildings. Backed by such aspects, the installation of elevators particularly, traction is expanding and positively influencing the industry altogether.

Geographically, the Global Elevator and Escalator Market expands across:

Here, the Asia Pacific region acquired a significant share of the escalators and elevators market in the historical period, with China and India holding prominent shares. It owes principally to the ongoing expansive policies and several initiatives the governments have laid down to encourage the modernization and urbanization of states across the region. With countries like India making a substantial shift from being an agrarian economy to an IT-based industrial and commercial hub with the government's thrust on 'Digital India' and 'Make in India' policies, the need for more advanced and technically equipped buildings has been on the rise. In fact, according to United Nations, India is likely to witness a massive urban population surge between 2015 and 2030, adding around 164 million people to its urban base. Besides, Smart Cities Mission has further encouraged such advancements in India, thereby bringing the opportunity for new entrants as well as behemoths to come up with more compatible and innovative escalators and elevators to cater to the demand projected by emerging economies across the Asia-Pacific. As such, market players have begun to deploy a strong network of distributors and retailers across multiple states to achieve direct customer reach and understand the client's exact requirements. These aspects are expected to bolster the instalment of elevators and escalators across the region, thereby fostering market expansion. For instance,

Recent Developments in the Global Elevator and Escalator Market

Elevators' energy consumption accounts for around 2% to 7% of the total energy consumption of the whole building. Thus, minimizing this energy loss remains a challenge to manufacturers. In a bid to tackle this, leading brands in the market are bringing their focus to developing energy-efficient elevators. Since governments worldwide are already emphasizing the usage of products leaving minimal carbon footprints, energy-efficient elevators and escalators are likely to provide lucrative opportunities for manufacturers in the coming years. For instance,

Possible Restraints: The Surge in Casualties Involving Elevator and Escalator

According to information from the Consumer Product Safety Commission and the U.S. Bureau of Labor Statistics, accidents involving elevators and escalators result in roughly 30 fatalities and 17,000 serious injuries annually in the United States. Nearly 90% of fatalities and 60% of major injuries are caused by elevators. 14 (nearly half) of the annual deaths involve accidents while working on or near elevators, including constructing, repairing, and maintaining elevators, as well as operating in or near elevator shafts. Incidents involving workers caught in or between escalator and elevator moving parts, in or on platforms that collapse or struck by escalators are numerous. These factors are likely to impede market growth during the forecast period.

A. Rapid urbanization worldwide, resulting in more erection of buildings and modernization of age-old infrastructures is likely to drive the Elevator and Escalator Market during 2023-28.

A. Escalator is anticipated to emerge as an area of remunerative opportunities for the leading players in the Elevator and Escalator Market during the forecast period.

A. Globally, Asia-Pacific would provide lucrative prospects for the Elevator and Escalator Market in the years ahead.

A. Rising demand for IoT-integrated elevators and escalators is likely to shape the growth of the Elevator and Escalator Market during 2023-28.

A. Energy-efficient elevators and escalators present lucrative prospects for the Elevator and Escalator Market through 2028.

A. The surge in casualties involving elevator and escalator is predicted to impede the market growth during 2023-28. 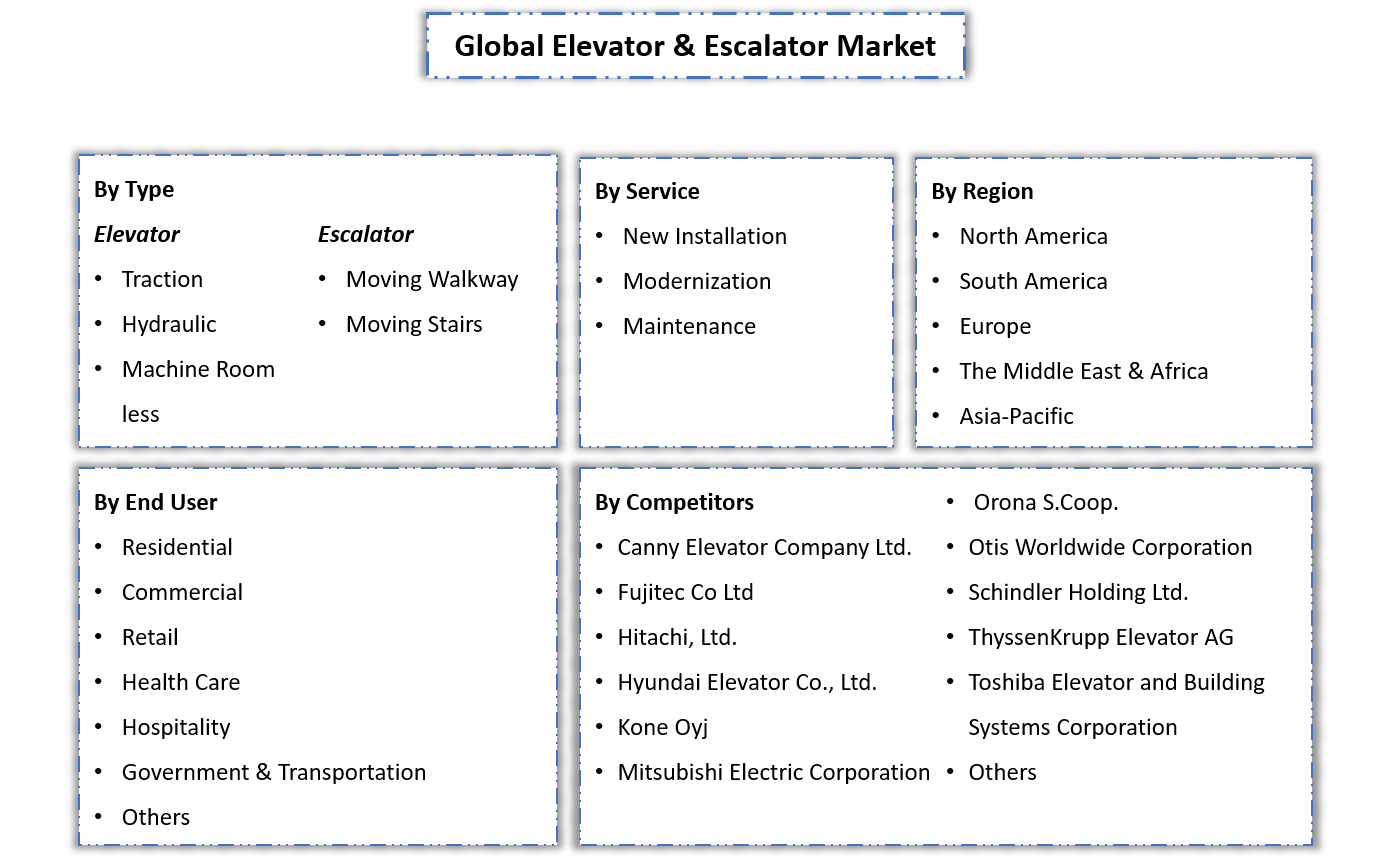