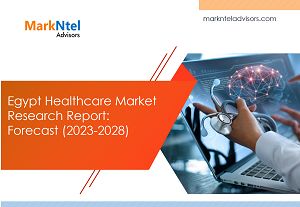 Secondary care facilities are hospitals where doctors refer patients to specialists after performing a basic examination. A doctor who specializes in the field of medicine then examines the patient. Allergists, infectious disease specialists, ophthalmologists, endocrinologists, gastroenterologists, nephrologists, neurologists, urologists, psychiatrists, and others are examples of secondary care specialists. Furthermore, the Egyptian government provision Health Insurance coverage for low-cost patient treatment in Egyptian hospitals. Moreover, the rise in lifestyle-related diseases as a result of Egyptian citizens' poor lifestyles has encouraged Egyptians to seek checkups at secondary care hospitals, which has accelerated the growth of the Egypt Healthcare Industry in recent years.

The Egypt Healthcare market is projected to grow at a CAGR of around 10.79% during the forecast period, i.e., 2023-28. The enormous presence of public & private healthcare facilities, such as specialty hospitals, clinics, etc., widely supported the revenue growth of the Egypt Healthcare market during the historical years. The country has gained a strong reputation within the Middle East & Africa region, owing to the availability of skilled healthcare professionals & infrastructure at a competitive cost, along with easier visa access compared to other regional competitors. This has notably helped the country earn a strong reputation as a medical tourism hub of the region.

The inbound tourists registered for health treatments include mainly from North, East, and West Africa nations & GCC countries due to the high cost of medical treatment & unavailability of skilled workforce in their respective countries. Additionally, the surging insurance penetration among the residents, of around 57% of individuals as of 2018, has widely supported the demand for healthcare services in Egypt.

Furthermore, the growing population & increased health awareness have created numerous opportunities for foreign investors in the healthcare sector. Along with this, Egypt passed several regulatory reform laws in 2018, including the "new company" law & bankruptcy law, as well as a new customs law in 2020. These regulations have improved the country's investment environment, allowing more companies to enter the healthcare sector. Hence, these factors are expected to contribute to the revenue generation of hospitals in Egypt during the forecast period.

With the rising prevalence of chronic diseases among the residents, the demand for specialized medical care clinics & hospitals has significantly increased to get advanced & cost-competitive treatment. Owing to the rising demand, the country witnessed a considerable surge in investments & innovations in healthcare facilities by leveraging artificial intelligence, machine learning, and the internet of things (IoT) to provide advanced medical treatment to residents. For instance, in 2022, CMR Surgical launched Versius, a robotic surgical system in Egypt.

The robot has been installed at Ain Shams University Specialized Hospital & the International Hospital for Urology and Nephrology (IHUN) to perform general surgery & neurological procedures on patients suffering from colorectal & urological cancers, as well as bowel & kidney diseases. Hence, the integration of advanced technologies in healthcare facilities would create an opportunity for the revenue growth of the Egypt Healthcare market in the upcoming years.

Based on the Type of Hospitals:

Here, Non-government or private hospitals held a significant revenue share in the Egypt Healthcare market compared to the government healthcare facilities. It is attributed to the well-developed infrastructure, availability of advanced medical equipment, and skilled medical staff to treat various genetic & chronic diseases in the private sector. Whereas government hospitals have low standards of care, there is a lack of medical equipment & qualified personnel in the public hospital in Egypt, due to which patients who can afford private healthcare facilities prefer to get treated in private hospitals only.

Based on the Disease Type:

Among them, the Diabetic disease type contributes heavily to the revenue generated by the Egypt Healthcare industry. This is due to a steady growth in diabetic patients, as a result of sedentary lifestyles, which may have resulted in an increase in obesity rates among the population. According to the International Diabetes Federation (IDF), Egypt ranks ninth in the world, in terms of diabetes prevalence, with nearly 8.85 million adult diabetic patients in early 2020. As per the federation, approximately 45% of the diabetic population remains untreated due to a lack of awareness & the country's shortage of medical facilities. Hence, this has had a negative impact on the Egypt Healthcare market's revenue growth from diabetic patients in previous years.

Though, the Egypt government is increasingly focusing on providing quality diabetic care to patients through the launch of several initiatives. For instance:

Thus, these initiatives have notably contributed to the demand for diabetic care among the residents, owing to the rise in disease awareness, and are expected to lead the market growth during the forecast period as well.

Since the historical years, the Egypt government has been constantly focusing on providing quality healthcare & cost-competitive medical services to residents to improve access to healthcare. As a part of the initiative, in 2018, the government launched a Universal Health Insurance (UHI) plan, 2032, to increase the adoption of advanced healthcare facilities among individuals.

Due to the high medical cost of treatment, the economically poorer section often abstains from availing the medical services, which in some cases contributes to a higher disease burden in the country. Hence, with the implementation of the plan, around 55.6 million populations were covered under the insurance scheme, according to the Government of Egypt. This notably resulted in an increased demand for healthcare services among the citizens.

Hence, the initiative of the Government of Egypt to provide healthcare subsidies is anticipated to have a significant impact on the healthcare market and would drive the need for cost-competitive & efficient medical services in Egypt during 2023-2028.

Growth Restraints: Unavailability of Skilled Manpower to Widen the Gap Between the Demand for Healthcare Services

As immigration activities increase in Egypt, the healthcare sector is experiencing a shortage of physicians. This has led to a significant decline in the demand for domestic healthcare services. According to the Egyptian Medical Syndicate, between 2018-2019, more than 10,000 doctors resigned from public healthcare institutions in Egypt to earn a competitive salary in other countries such as the US, the UK, etc., resulting in a shortage of secondary care staff in the country. For instance:

The factors contributing to the high immigration rates & shortage of skilled manpower are low salaries, undesirable working conditions, lack of equipment supplies, and exposure. Hence, the difficulty in retaining skilled medical staff is a prominent factor that has hindered the Egypt Healthcare market.

However, presently, domestic healthcare companies such as Saudi German Hospital, As Aslam International hospital, among others, are considering hiring skilled medical staff from India, the US, etc. Additionally, domestic healthcare firms are focusing on providing the medical staff with competitive salaries & training activities. Hence, this would mitigate the present healthcare hindrance in Egypt in the upcoming years.

A. Non-government is the leading type of hospital in the Egypt Healthcare Market during 2023-28.

A. The rise in healthcare spending & medical tourism is expected to drive the Egypt Healthcare Market during 2023-28.

A. The proliferating demand for geriatric medical services is the key trend shaping the growth of the Egypt Healthcare Market during 2023-28.