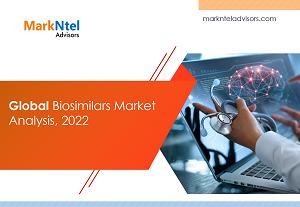 Biosimilars are bio-therapeutic products with high similarities to biological drugs. These therapeutics are developed using living organisms or cells and exhibit complex molecular structures. With rapid healthcare developments, Biosimilars are swiftly gaining momentum to address chronic diseases like diabetes, cancer, anemia, and growth hormone deficiency and are becoming globally available. Furthermore, since biosimilars drugs are like the replications of biologics, they are affordable and attract a larger patient pool for various treatments.

The Global Biosimilars Market is projected to grow at a CAGR of around 17% during the forecast period, i.e., 2022-27. The growth of the market is likely to be driven primarily by the growing prevalence of chronic diseases across different corners of the world and the mounting demand for effective & safe medications for their treatments. However, since the treatment cost of various illnesses like cancer is high and restrains numerous patients due to affordability issues, the demand for cost-effective alternatives with similar treatment effects like biologics is rising rapidly and stimulating the growth of the Global Biosimilars Market.

Besides, governments of different countries are actively participating in the industry through massive expenditure as well as research & development activities for innovations in biosimilar medications to cater to the unmet patient needs for various treatments. In addition, the growing emphasis of the governments on cost-effective drug synthesis to attract a massive patient pool is also contributing to the market expansion.

Furthermore, favorable policies for the development & clinical trials of biosimilars entwined with increasing inclination toward developing new, enhanced, efficient, safe, and affordable therapeutics are also boosting the market, especially across countries like Germany, the UK, France, the US, China, Japan, & India, among others.

Nevertheless, regulatory associations like European Medicines Agency, US Food & Drug Administration (FDA), & China Food & Drug Administration have different standards for maintaining the safety profile & effectiveness of biosimilars. As a result, the process of drug approval often becomes time-consuming & lengthy, and it might act as a growth restraint for the Global Biosimilars Market. 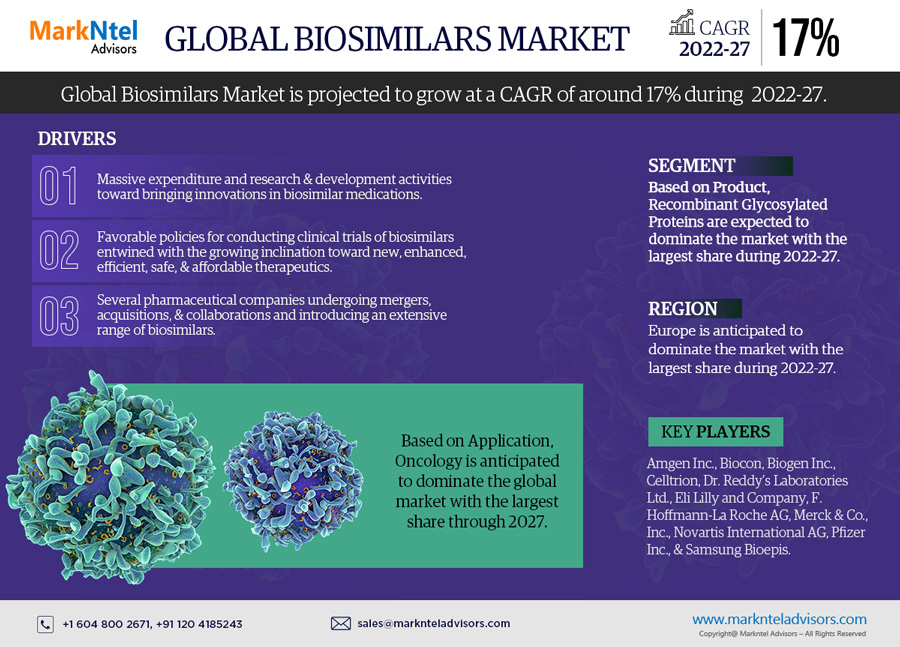 Based on the Product:

Among all product types, Recombinant Glycosylated Proteins are expected to dominate the Global Biosimilars Market with the largest share and generate lucrative opportunities for the leading players in the industry during 2022-27. Among the Recombinant Glycosylated Proteins, monoclonal antibodies (mAbs) are projected to contribute significantly to the market growth, principally due to the patent expiration of several biologics and rapid approvals by the FDA of new biosimilars for the treatment of different health conditions.

mAbs are biological agents that help treat malignancies like Non-Hodgkin's Lymphoma (NHL) & chronic lymphocytic leukemia. As effective as they are, the procurement is expensive, which restrains a prominent number of patients from opting for the treatment. Hence, as patents for many mAbs are expiring in the coming year, developing the active ingredient of the original drug-like mAbs biosimilar medicines is filling the space, which would continue to cater to the patient needs in the future.

Moreover, growing awareness among people about the availability of Biosimilar Monoclonal Antibodies using large, complex proteins to identify & neutralize bacteria, viruses, etc., and aid in the treatment of diseases like cancer or rheumatoid arthritis is another crucial aspect playing a prominent role in driving the Global Biosimilars Market.

On the other hand, Recombinant Non-Glycosylated Proteins are anticipated to demonstrate a fast growth pace in the global market over the forecast years, principally due to the increasing number of regulatory approvals for Biosimilars by various health regulatory bodies across different regions like Europe, North America, etc. Besides, the rise in the case of patients with health conditions like diabetes, cancer, arthritis, Alzheimer's, and chronic kidney issues, among others, are also stimulating the demand for affordable, effective, and safe medications and directly influencing the need for recombinant non-glycosylated proteins, thereby boosting the market growth.

Based on the Application:

Here, Oncology is anticipated to dominate the global market with the largest share through 2027. It attributes principally to the increasing prevalence of breast, lung, liver, colorectal, gastric, & blood cancers, among others, across different corners of the world, i.e., playing a prominent role in propelling the need for affordable yet effective treatments. It, in turn, is driving the demand for biosimilars since they replicate the efficacy of biologics for such illnesses & are much more affordable than them.

In addition, as cancer is becoming one of the prominent causes of death, governments of different countries are increasing their healthcare expenditure for rapid developments in the oncology sector. In addition, they are investing substantially in various research & development activities to bring innovations in biosimilars and cater to the unmet needs of patients. A few biosimilars approved by the US FDA include the following:

While the high cost of cancer drugs restrained many patients from getting the appropriate treatment, the adoption of Biosimilars at affordable prices is playing a prominent role in attracting a larger patient pool globally and stimulating the Global Biosimilars Market across the oncology sector.

Of all regions globally, Europe is anticipated to dominate the Biosimilars Market with the largest share during 2022-27. It owes principally to the presence of various favorable policies across different countries like Germany, the UK, France, etc., for the development & clinical trials of Biosimilars to address different health conditions of people. This aspect is also encouraging the leading players in the regional market to indulge in various research & development activities associated with Biosimilars.

Besides, the mounting demand for Biosimilars across Europe is instigating many prominent biopharmaceutical companies like Novartis, AstraZeneca, Pfizer, Merck, etc., to establish their facilities in the region’s different countries. It, in turn, shall demonstrate active participation of the players in the development of Biosimilars for maintaining competitive pricing & introducing innovative products in the market to cater to the unmet needs of patients, which, in turn, would augment the regional market growth in the coming years. Furthermore, the well-developed healthcare infrastructure and an elevating number of new biosimilar product launches are other crucial aspects fueling the growth of the Biosimilars Market across Europe.

On the other hand, North America is anticipated to demonstrate the fastest market growth during 2022-27, where the US would dominate the regional market. It owes principally to the active participation of the US government through substantial investments in the healthcare infrastructure, coupled with various ongoing research & development activities for bringing innovations in biosimilar medications.

While the US is still on the track to gaining full potential in the field of Biosimilars, the presence & active participation of prominent players entwined with multiple commercialization prospects for these products across the country shall contribute significantly to the overall growth of the Biosimilars Market across North America over the forecast years.

A. Diverse regulatory standards across several regions worldwide for managing the safety & effectiveness of drugs cause delays in getting approvals, which might restrain the fledged growth of the Global Biosimilars Market during the forecast period, i.e., 2022-27.

A. Oncology is anticipated to emerge as an area of remunerative opportunities for the leading players in the Global Biosimilars Market over the forecast years.