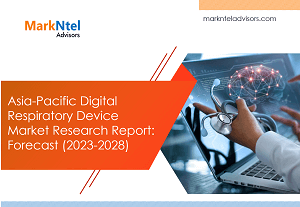 The Asia-Pacific Digital Respiratory Device Market is projected to grow at a CAGR of around 36.2% during the forecast period, i.e., 2023-28. Most of the market expansion attributes to the mounting instances of respiratory diseases, including asthma, chronic obstructive pulmonary disease, and sleep apnea resulting in the frequent adoption of the digital technology-enabled medical device. Besides, the region’s widespread presence of other respiratory diseases, such as chronic bronchitis, emphysema, and wheezing, has swiftly augmented the demand for digital respiratory devices. For instance, per the research study titled” Global, regional, and national prevalence of asthma in 2019: a systematic analysis and modeling study”, South East Asia Region had the most significant global cases of current wheezing, with 200.57million in 2019, The age group that contributed the most was 30-34 years in West Pacific region. The countries with the most cases of current wheezing globally were China and India.

However, by means of new technological advancements in emerging economies coupled with bolstering public awareness and increased healthcare expenditure, several governments seek to mitigate respiratory ailments while improving medical facilities in their respective countries. Given the aftermath of Covid-19, China is pacing up with the inclusion of Artificial intelligence in the medicine and healthcare ecosystem. The goal is to optimize resource allocation, enhance service efficiency, and bring innovation in service and management modes.

Moreover, new regulatory opportunities and difficulties arise as machine learning, and artificial intelligence (AI) become more frequent in digital health products and solutions. Thus, numerous regulatory agencies are actively developing regulatory frameworks that handle products utilizing AI/ML, such as Singapore’s HSA and Japan’s MHLW/PMDA. Furthermore, the rapid increase in the population of seniors and obese people will also likely present chances for the market for respiratory care devices to expand in the years to come. Nonetheless, the demand for respiratory care equipment may face additional challenges due to the numerous adverse effects on infants’ respiratory systems in the coming years.

COVID-19 came as a shock to the economies in the APAC region as the healthcare infrastructure was not comparable to the global benchmarks. This outbreak ultimately resulted in an increased number of patients suffering from respiratory ailments. China has the most significant number of chronic obstructive pulmonary disease incidences due to the rising aging population. As of Jan 2020, around 41.3% population in China were aged over 60 years of age, says United Nations (UN). Owing to alarming levels of air pollution, exposure to chemicals, an aging population, and rising smoking habit among inhabitants, the rate of frequency of diseases such as chronic pulmonary diseases (COPD) and asthma is growing among the people in the region. Such increasing prevalence of diseases would positively influence the supplies of respiratory devices in the forecast period.

Possible Restraints: Concerns Related to The Precision and Reliability of Such Devices

Although the benefits of such smart devices are immense, there are some restrictions that may impede industry growth in the years to come. The prominent one would be the concerns related to the precision and dependability of the device. Also, these devices' availability and high cost hinder market expansion. Besides, given the multiple adverse impacts on newborns' respiratory systems in the coming years, the demand for respiratory care equipment may encounter new difficulties.

In order to handle the large amount of data generated during diagnosis and treatment procedure paired with health status, efficient regulations by the government have been realizing in the past few years. The APAC region's regulatory review procedures are expected to be more consistent and predictable because of the convergence of digital health regulations, which will elevate the delivery of new, safe, and effective digital health solutions to patients and medical professionals. Furthermore, the establishment of regulatory pathways designed specifically to meet the requirements of digitalized medical products would encourage innovation, which will be advantageous to both developers and patients.

The sudden breakout of the pandemic in China and its spillover to other Asia-Pacific countries has increased the demand for Digital Respiratory Medical Devices exponentially. As such, the rise in the death toll and the number of infected individuals has pushed governments and private healthcare players toward adopting more sophisticated respiratory medical devices to detect, prevent and monitor such viral pandemics. Therefore, the demand is expected to proliferate in the forthcoming years as precautionary healthcare spending in various countries is likely to snowball considerably.

Among all other indications, Asthma is the most prominent across APAC, thus instigating the demand for related treatment methods in the forecast period. Concomitant allergic diseases, personal history of allergy, and cesarean birth are the prominent risk factors for developing asthma across the continent. Even with the presence of novel therapies, healthcare professionals face continuous blocks in managing respiratory diseases here. As a result, Smart inhalers are gaining traction as they have the potential to address those challenges. These inhalers are equipped with advanced features that aid the connection with mobile apps, enabling the supervision of medication schedules and subsequent doses. Besides, these devices can deliver dosage reminders, track adherence, correctly record the time, date, and location of each dose administered, and enable access to readily shareable data via Bluetooth. Furthermore, many smart devices either have sensors built into the inhaler's body or have external sensors that can be added to conventional inhalers. Backed by these aspects, the Industry for digital respiratory devices will likely gain momentum in the coming years.

All things considered, Hospitals & Clinics acquired a sizeable portion of the Asia-Pacific Digital Respiratory Device Market and are projected to continue to lead in the same direction over the coming years. This growth ascribes to a rapid increase in the elderly population, which has subsequently elevated the demand for emergency and long-term hospitalizations. Consequently, increasing demand for smart respiratory machines such as BI-PAP Devices, smart inhalers, oxygen concentrates, and diagnostics monitoring devices, including spirometers and pulse oximeters. On the other hand, the swift surge in the number of premature or newborn infants with underdeveloped lungs or showing respiratory difficulties is resulting in high childhood asthma, thus, prompting medical facilities like hospitals & clinics to stock such devices for timely and proper treatment. As a result, the hospitals and clinics indicate lucrative prospects for the sector's top players, propelling the overall market trajectory through 2028.

Country-wise, China garnered the lion’s share of the Digital Respiratory Device Market across Asia Pacific in the historical period. The outbreak of Covid -19 and the ever-increasing aging population have been the prominent factors backing the steady adoption of such devices here. It also owes to the growing prevalence of asthma, which has been an economic and social burden for children and guardians for the past three decades. As such, China announced its first health initiative, Healthy China 2030, which seeks to improve the national health system. Such initiatives would further propel the demand for smart and effective medical devices in the long run. Moreover, Medical informatics research in China has AI as a competing arena focusing on diagnostic deep-learning algorithms for medical imaging.

Similarly, according to the Journal of Global Health, ten countries alone accounted for more than half of the global cases of asthma in 2019, with India at the top, followed by China. Among India’s 1.31 billion people, about 6% of children and 2% of adults have asthma. Due to rapid urbanization and continuously increasing population awareness, the usage and advancement of digital medical devices has grown over the years. For instance, In July 2022, OMRON Healthcare India expanded its Oxygen therapy portfolio by adding an Oxygen concentrator. On the other hand, Australia acquired the leading position among pacific countries in the market, with COPD being the 5th major cause of death across the country. With one-fifth of the population already demonstrating asthma-COPD overlap syndromes (ACOS), Australia emerges as an opportunistic area for the stakeholders.

Do you require further assistance?

1. The sample report seeks to acquaint you with the layout and the overall research content.

2. The deliberate utilization of the report may further streamline operations while maximizing your revenue.

3. To gain an unmatched competitive advantage in your industry, you can customize the report by adding more segments and specific countries suiting your needs.

4. For a better understanding of the contemporary market scenario, feel free to connect to our knowledgeable analysts.

A. The Asia-Pacific Digital Respiratory Device Market is projected to grow at a CAGR of around 36.2% during 2023-28.

A. Increasing prevalence of chronic respiratory diseases across APAC is likely to drive the Asia-Pacific Digital Respiratory Device Market during 2023-28.

A. Asthma is anticipated to emerge as an area of remunerative opportunities for the leading players in the Asia-Pacific Digital Respiratory Device Market during the forecast period.

A. China along with India would provide lucrative prospects for the Asia-Pacific Digital Respiratory Device Market in the years ahead.

A. Covid-19 outbreak prompted the utmost utilization of digital respiratory devices and thus shaping the growth of the Asia-Pacific Digital Respiratory Device Market during 2023-28.

A. Favorable regulatory standards for digital interventions and strategies in the healthcare ecosystem are the growth opportunities driving the Asia-Pacific Digital Respiratory Device Market through 2028.

A. Concerns related to the precision and reliability of such devices may impede the market growth through 2028.