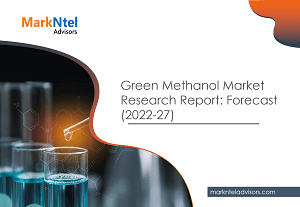 Green methanol is a low-carbon fuel that can be produced either from biomass gasification or renewable electricity & captured CO2 and used either as a transportation fuel or as a sustainable energy carrier for storing electricity generated through renewable sources.

With the ever-increasing need for alternative energy sources & fuels owing to the ongoing climate crisis, green methanol is gaining immense popularity worldwide as it promises to assist in scaling up environment-friendly methanol technology and contribute to a sustainable future.

The Global Green Methanol Market is projected to grow at a CAGR of around 4.9% during the forecast period, i.e., 2022-27. Most of the market expansion would be driven by the growing inclination of the chemical, shipping, & automotive industries toward using green methanol and minimizing carbon emissions. Besides, stringent regulations for the shipping industry to reduce sulfur levels in fuels, coupled with the mounting adoption of renewable energy sources, including green methanol, across the automotive & aviation sectors, are other crucial aspects projected to boost the market in the coming years. In addition, the growing requirements for MTBE (Methyl-tert-butyl-ether) used for biodiesel production in the transportation sector, as well as formaldehyde for paints & coatings and construction applications, are further driving the demand for green methanol.

Methanol is witnessing an ever-increasing demand since it is a key blending agent in conventional fuels used for reducing their emissions. However, since methanol is produced mainly using natural gas & coal, it is acting as a barrier to the use of renewable products. As a result, several countries worldwide are rigorously focusing on utilizing green methanol, i.e., produced using renewable feedstocks like agricultural waste, forestry residues, captured CO2, renewable hydrogen, etc.

There's a growing utilization of renewable methanol as a hydrogen carrier in fuel cells, which can create new directions for the green methanol industry in the future. Since green methanol is liquid at room temperature, which makes it easy to transport, it is one of the most effective hydrogen carriers. Methanol-based fuel cells can efficiently produce clean electricity to power cars, trucks, buses, & ships, among others. They can be fueled as quickly & easily as gasoline & diesel and provide power for a longer duration.

Many fuel-cell manufacturers are producing hydrogen & methanol fuel cells in line with their plans to switch to green methanol. Furthermore, a fuel cell-based power generator, a sustainable alternative to diesel generators, is another opportunistic area for the leading companies in the green methanol market to witness lucrative prospects in the future.