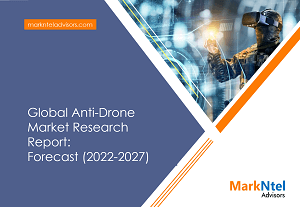 Anti-Drone is an area-defense system designed to track unwanted drones & Unmanned Aerial Vehicles (UAVs).  Due to its area-defense capability, it provides maximum protection of areas & facilities of various sizes, forms, and functions. It also comprises different sets of equipment depending on the application, as well as based on the customer’s requirement. The major dynamics accelerating the anti-drone market are driven by varied parameters, which include a large number of security threats by anonymous drones as well as a sheer rise in terrorist & illegal activities across the globe in recent years.

The Global Anti-Drone market is estimated to grow at a CAGR of around 29.91% during the forecast period, 2022-27. Drones are emerging technologies used by military & individual groups as they can be easily operated remotely as well as helpful in surveillance, potential attacks, monitoring other illicit activities, etc. In addition, the growth in the Anti-drone market is proportionately related to security concerns. Considering this, in the military sector, the demand for effective counter-drone systems has grown extensively due to various incidents of drone attacks in regions such as the Middle East, South East Asia, Europe, etc. This looming threat of drone attacks on military high-value targets as well as on the various civilian installation has urged the need for the inclusion of anti-drone systems across the globe.

Besides, the governments of various countries, including the US, Canada, India, China, Russia, etc., have significantly increased their investment in purchasing Anti-drone systems for their military bases to reduce unwanted terrorist attacks in their region. For instance:

Furthermore, to reduce the growing incidence of security breaches, countries are investing heavily in the development of safer & more effective anti-drone technologies, thereby protecting their country from future terrorist attacks. Thus, with the advancements in the technologies of drone systems, the demand for high-end counter-measure or anti-drone systems has been evolved, leading to support the robust growth of the anti-drone market globally during the historical period, i.e., 2017-2021.

The use of drones for military & commercial purposes has increased considerably in recent years. At the same time, the development of Directed Energy Weapons (DEWs) is also being evolved to reduce the potential attacks of UAVs on high-value military and civilian targets. Additionally, the growing demand for the implementation of counter-drone measures incorporates a variety of technologies & approaches, which, in turn, has widened the scope for DEW to be used against unmanned threats. Furthermore, companies are developing directed energy weapons to be used in various operational areas where threats of attacks are increased & have become more complex. In 2020, the Defense Research and Development Organization (DRDO) announced the development of directed energy weapons (DEW) to be part of a national program to fulfill their short, medium, and long-term goals to develop new variants of DEW. Moreover, in 2021, DRDO has deployed an anti-drone system with a 10 kW Laser Weapon System (LaWS) in its vehicle to engage aerial targets up to 2.5 km.

Impact of Covid-19 on the Global Anti-Drone Market

The emergence of COVID-19 has had a significant impact on the defense, military, commercial, government, and other sectors, as well as disrupted global supply chains. Several companies delayed consignments of anti-drone systems due to factors, such as delayed purchases, disruptions in the supply of raw materials, and cross-border trade restrictions. Consequently, these factors have negatively impacted the market for anti-drone systems globally.

However, with the increasing government support to strengthen defense capability, advancements in anti-drone technologies, rising investment, and the growing government concern to protect their country from unwanted drones, the market for anti-drone systems was expected to grow significantly post-COVID-19. Thus, these initiatives would have led countries to demand more advanced counter-drone technology to safeguard their countries from future threats, thereby escalating the market of anti-drone in the foreseen years.