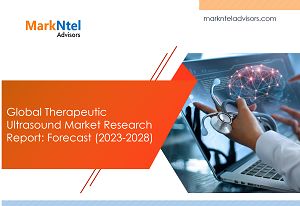 The Global Therapeutic Ultrasound Market is projected to grow at a CAGR of around 4.6% during the forecast period, i.e., 2023-28. The market is predominantly driven by the progressing technological advances in therapeutic ultrasound imaging resulting in extensive application in physical therapy, cancer, gynecology & obstetrics, cardiovascular disorders, and urinary disorders, among others. Besides, access to easy medical reimbursements for diagnostic and therapeutic ultrasound procedures has further exemplified the adoption rate by the end-users. Further, the rising prevalence of abdominal disorders accompanying cardiovascular and respiratory diseases has brought a swift augmentation for highly non-invasive or minimally invasive therapies such as high-intensity focused ultrasound (HIFU). Such treatment has witnessed speedy adoption in a bid to ensure minimized harm to patients while making the surface of the target organ go unscarred.

Therapeutic ultrasound gained traction soon after it got clinical acceptability, unlike a decade ago when ultrasound imaging systems were not generally accessible. A few of its application includes shock wave therapy, lithotripsy, tumor ablation, site-specific and ultrasound-mediated medication administration, Sonothrombolysis, and acoustic hemostasis, among others. Studies have found that ultrasound enables the dissolving of thrombus in blood vessels, responsible for causing a heart attack, pulmonary embolism, or Deep Vein Thrombosis (DVT) with the integration of an ultrasonic transducer and microbubble contrast agents.

Additionally, ultrasound boosts the capacity of cancer medications to cross the blood-brain barrier and deliver them to the intended organs. These benefits have paved the way for smoother and faster incorporation of ultrasound therapy in numerous applications, thereby strengthening the presence of respective medical device manufactures.

Here, Physical Therapy is anticipated to dominate the Global Therapeutic Ultrasound Market during the forecast period. It is primarily because, Physical Therapists widely recommend therapeutic ultrasound for specific soft-tissue injuries, including muscle strains and tears, ligament injuries, and joint pain. In fact, in a few instances, it has shown a sign of a cure for chronic pain. A condition of hyperemia develops when injured tissues' temperature ranges between 40–45°C, resulting in a therapeutic impact. Thus, with its ability to boost the temperature of certain tissues, therapeutic ultrasound has found application in chronic disease prevention. Medical professionals find ultrasound extremely useful in analyzing targeted treatment spots with a better interior view Backed by these aspects, these types of treatment have witnessed comprehensive adoption, thereby positively influencing the market players to bring forward more advanced and minimally invasive variants within the category.

Between the two, The High-Intensity Focused Ultrasound segment acquired a lion’s share in the Global Therapeutic Ultrasound Market during the forecast period. It owes principally to the increasing prevalence of prostate cancer. According to The National Engineering Research Center of Ultrasound Medicine, the number of cases treated with ultrasound-guided HIFU in 235 clinical centers across 29 countries amounts to 175,769 between 2010 to 2020.

Chongqing Haifu Hospital has performed 6,032 HIFU ablation procedures, and with this, ranked the third in the world in terms of the cumulative total number of HIFU cases and the third in the number of HIFU cases in 2020 alone, cites International Society of Minimally Invasive and Virtual Surgery. Being a novel and non-invasive treatment for prostate cancer, the adoption of High-Intensity Focused Ultrasound (HIFU) is likely to expand in the coming years. For instance,

On the geographical front, North America is expected to acquire the leading position with the largest revenue share during 2023-28. The dominance largely attributes to the robust presence of prominent players such as Fujifilm Europe GmbH, General Electric, Philips Healthcare, and Siemens Healthcare across the region. These market behemoths are determined to bring innovative technologies such as high-intensity focused ultrasound and Extracorporeal Shockwave Lithotripsy, owing to substantial investment in the healthcare ecosystem across the region. Moreover, with an alarming rise in the prevalence of chronic diseases such as obesity, and diabetes leading to strokes, the prerequisite to bring more effective prevention and cure technique paired with devices have surged in the past few years.

According to the Centers for Disease Control and Prevention (CDC), in the U.S., nearly 6 in 10 people suffer from one or more chronic diseases, and approximately 38% of deaths are only due to these chronic diseases with Heart attack, cancer, and lung diseases are the prominent ones. Since ultrasound aids in the early detection of disease or infection existing in the body, leading to timely treatment. Perhaps It why it is of paramount importance to keep abreast of the latest innovations entering the Ultrasound space.

A. The Therapeutic Ultrasound Market is projected to grow at a CAGR of around 4.6% during 2023-28.

A. The rising prevalence of various musculoskeletal issues is the prominent factor likely to drive the Therapeutic Ultrasound Market during 2023-28.

A. Physical Therapy is anticipated to emerge as an area of remunerative opportunities for the leading players in the Therapeutic Ultrasound Market during the forecast period.

A. Globally, North America would provide lucrative prospects for the Therapeutic Ultrasound Market in the years ahead.

A. The clinical development and acceptance of ultrasound therapy in numerous applications are the latest tends shaping the growth of the Therapeutic Ultrasound Market during 2023-28. 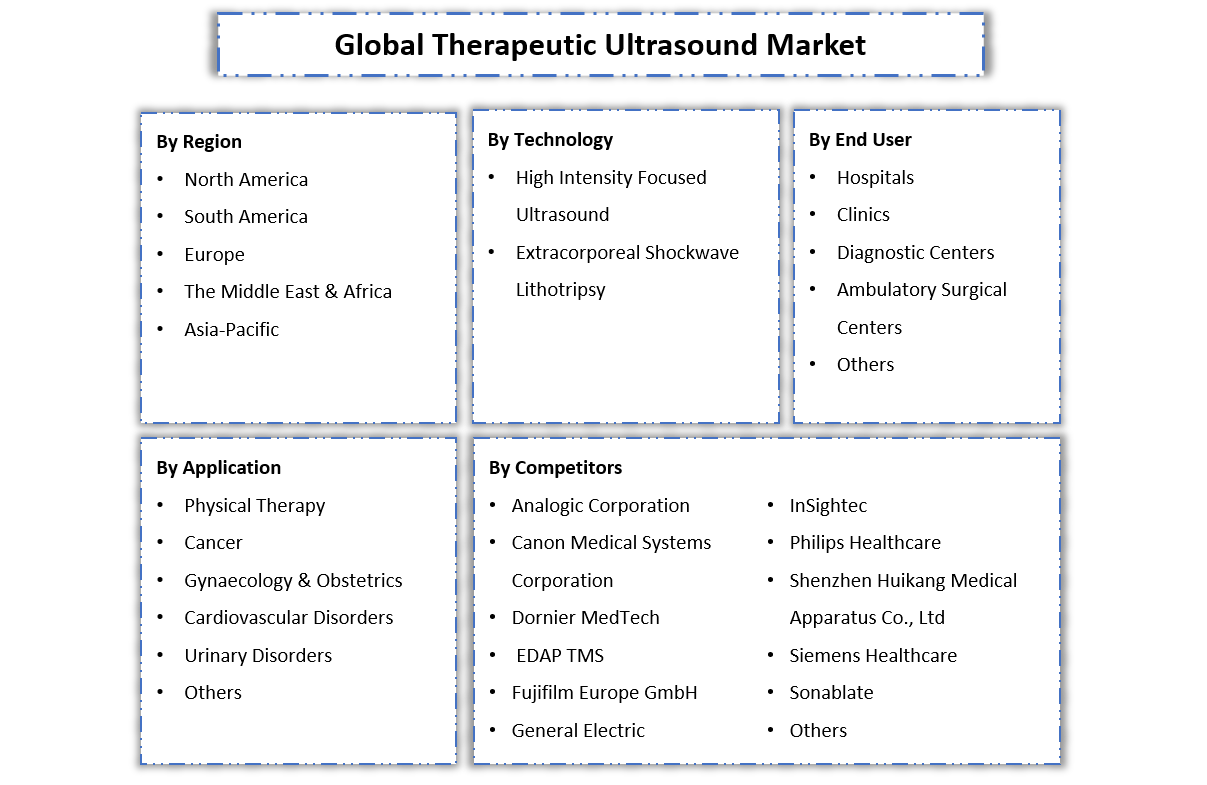