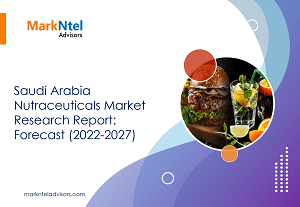 Nutraceutical products are non-specific biological supplements used to promote general well-being, control symptoms, and prevent malignant processes. It is a food or part of a food that provides medical or health benefits, including the prevention & treatment of disease. Saudi Arabia is one of the largest economies in the Middle East, with a sizeable population that attracts a large number of pharmaceutical & processed food companies to offer their respective products. Further, the increase in the adoption of nutraceutical supplements in the food products & beverages, along with the nutraceutical supplementation, would flourish the market in the coming years.

The Saudi Arabia Nutraceutical Market is projected to grow at a CAGR of around 6.71% during the forecast period, i.e., 2022-27, says MarkNtel Advisors in their recent research report. The Saudi Arabia Nutraceutical market expanded significantly during 2017-2021. The increasing awareness of consumers toward the health benefits of nutraceuticals as well as the food & beverages sector, including the nutraceuticals in the edible products, has been some of the key factors attributing to the growth of the nutraceutical market. Further, with the high intake of sugary & oily food products, along with comfortable lifestyle adoption, lifestyle-based diseases in the country have become widespread. These diseases include cholesterol, diabetes, blood pressure, cardiovascular diseases, etc., which have been some of the leading causes of death in the country.

Moreover, this phenomenon has significantly increased awareness among the netizens, thereby enhancing the adoption of healthy lifestyle practices, along with the adoption of healthy food in the diet, such as nutraceuticals as supplements. In 2020, according to the Saudi Health Ministry, around 37% of deaths in the Kingdom of Saudi Arabia were caused by cardiovascular disease. Besides, due to the high number of patients suffering from chronic illness, the demand for nutraceutical products is expected to witness a sizeable increase in the coming period.

Furthermore, the government of Saudi Arabia has taken a variety of initiatives to promote the health benefits of nutraceuticals. In 2018, the Saudi Food and Drug Authority (SFDA) launched its 'Healthy Food Strategy' in order to reduce the consumption of sugar, salt, and fat in food products. This initiative also includes placing a clear nutritional label on the products. Additionally, the companies that signed the pledge with the government were Kellogg’s Arabia & PepsiCo. International, Nestlé Middle East, Mars Saudi Arabia, Mondelez Arabia, Ferrero, Coca-Cola, Unilever, and Freeze Land.

Key Trend in the Market:

Significantly, the rising adoption of nutraceuticals in Saudi Arabia would motivate nutraceutical producers to innovate & launch different categories of dietary supplements as per the customer's requirements in the forecast years & it is also expected to attract the customers as per their needs.

Impact of COVID-19 on the Saudi Arabia Nutraceutical Market

In 2020, with the outbreak of the COVID-19 pandemic, the Nutraceutical market witnessed robust growth, owing to the major factors such as health awareness among consumers, demand for vitamins, adoption of healthy food practices, and an increase in physical activities among the population to increase immunity. Moreover, as good nutrition is directly associated with enhanced immunity, thus certain types of health supplements have also experienced a surge in popularity among consumers, such as Vitamin C, multivitamins, zinc, protein, omega-3, and probiotics. Additionally, the increase in health & fitness activities among the population of Saudi Arabia contributed immensely to greater demand for health supplements leading to a higher growth witnessed in 2020.

Besides, there was an increase in the sales of plant-based supplements in Saudi Arabia amid the coronavirus spread, as the consumers were slightly skeptical towards the animal-based supplements usage. Further, the nutraceuticals production facilities in the Kingdom of Saudi Arabia were impacted due to the supply chain constraints in March & June of 2020, as the country is highly dependent on the import of raw materials. However, the supply chain consistency was ensured due to the prompt response by the government agencies to ensure the constant supply of pharmaceutical & nutraceutical production in the country. 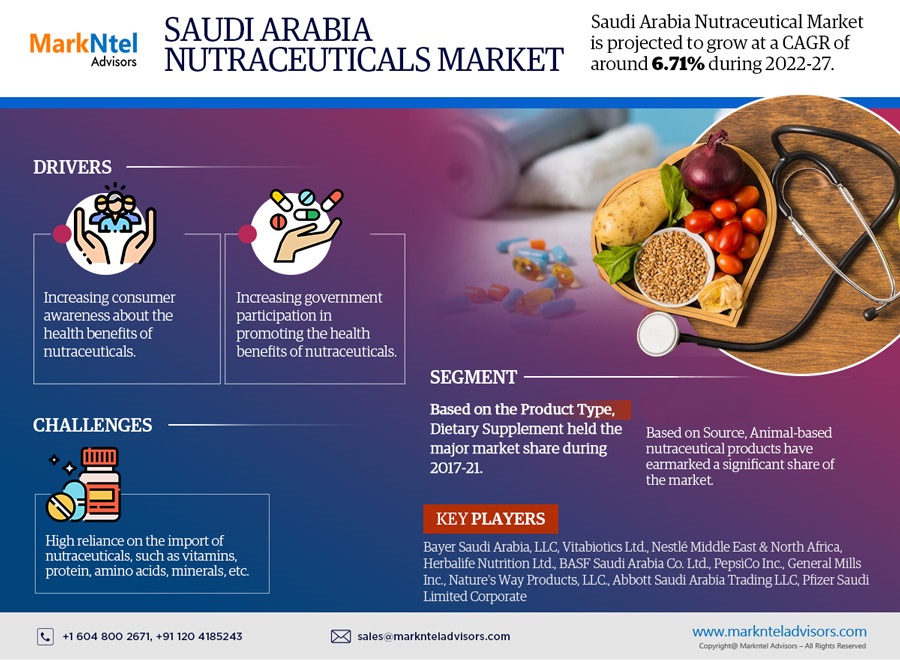 Among them all, Dietary Supplement held the major share in the Saudi Arabia Nutraceuticals market during 2017-2021. Some of the key reasons assisting the segment attain the market size are increasing awareness among the general consumers as well as a rise in the health & sports segments leading to higher adoption of dietary supplements. Furthermore, during the COVID-19 pandemic in the year 2020, there was a significant increase in the demand for dietary supplements, with a higher level of awareness among the population to boost the immune system & reduce the effects of coronavirus.

Of them all, Animal-based nutraceutical products have earmarked a significant market share in Saudi Arabia. Animal-based supplements such as protein, omega-3, and various vitamins & minerals are easy to absorb compared to plant-based supplements due to the unavailability of fiber, which slows digestion. In addition, protein products such as whey are predominantly used in the sports category as it is easy to digest. Other animal-based supplements, such as omega-3, extracted from fish liver oil, have also witnessed growth with the health consciousness among the consumer for the brain & skin health.

Further, collagen peptides, derived from animal products, have been extensively adopted by consumers because they provide a variety of health benefits, including preventing aging, improving the health of the skin, and preventing the formation of osteoporosis. Moreover, various animal-based collagen, such as bovine & fish-based collagen, have witnessed an increasing demand in the Saudi Arabia Nutraceutical market during 2017-2021.

Saudi Arabia is one of the high-income economies in the Middle East region, with high consumption of packaged food & beverages. However, the consumption of packaged foods and luxury lifestyles, combined with decreased physical activity, has resulted in a significant portion of the population suffering from ailments such as obesity, hypertension, diabetes, etc. According to World Health Organization, the total percentage of the obese population under the age of 15 years was over 70% in the Kingdom of Saudi Arabia.

Similarly, the elder-age population in Saudi Arabia also has a high-risk potential for cardiovascular diseases. According to a Saudi Health Ministry survey, 37% of the deaths in the country are caused due to cardiovascular diseases. These are a few of the key reasons that have pushed the consumers in the region to adopt healthy food practices & nutraceuticals to curb the diseases in the young- & middle-aged population. In addition, as nutraceutical supplements & their addition to various foods & beverages prevent lifestyle diseases by reducing the deficiency of nutrients, the Nutraceuticals market in Saudi Arabia has grown steadily over the period 2017-2021, and is also expected to grow further during the forecast period.

Possible Restraint: Higher Dependence on Import of Nutraceuticals by Saudi Arabia to Hamper the Market

With the high reliance on the import of nutraceuticals, such as vitamins, protein, amino acids, minerals, etc., the country has become extensively import reliant. This import dependency has grown during the historical period in the country that constitutes some of the key challenges for the nutraceutical supplement industry, such as high susceptibility of the prices in the domestic market & supply chain consistency issues concerning any eventual condition. Additionally, the supply chain issue was apparent during COVID-19, when the major exporters in Saudi Arabia were adversely affected by high infection rates, causing import & export restrictions.

The growing trend of fit & lean body among the adults of the country has been significantly fueling the demand for dietary supplements such as energy bars, protein bars, non-carbonated energy drinks, sports supplements, etc., over the last few years. Furthermore, the outbreak of the COVID-19 pandemic has also inclined the customers to join fitness training institutes, gyms, sports clubs, etc., owing to the concerns about being fit & improved immune systems.

Moreover, the rising craze of bodybuilding has also led to the expansion of gyms, fitness institutes, etc., in Saudi Arabia. Therefore, the growing fashion of joining fitness centers, sports clubs, etc., would create an opportunity for muscle gain dietary supplements like Whey Protein, Total Gainer, Isopore, etc., to be in considerable demand in the forthcoming years.

A. The Saudi Arabia Nutraceutical Market is expecting around 6.71% CAGR during 2022-27.

A. Dietary Supplements are anticipated to emerge as an opportunity area for the leading players in the market during the forecast period.

A. Growing partnerships between the nutraceutical companies & food & beverages companies to offer functional food products is an area of growth opportunity in Saudi Arabia.

A. The growing vogue for a fit & lean body with good immunity since the COVID-19 pandemic period would lead the market growth during the forecast period.