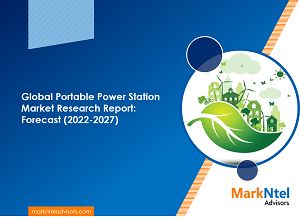 Portable power stations are high-capacity portable battery packs that allow the user to charge several devices & small appliances using a rechargeable battery. Such devices are designed with the core aim of not needing fuel to keep things functional. These power stations exhibit a combination of Air Conditioner outlets, USB-C outlets, USB-A outlets, & car outlets, among others, making their utilization extensive and much easier to source power portably.

The idea of a portable changing station is backed by the goal of bringing more sustainability than conventional energy sources. These devices are known to offer a long-term energy supply and enable a much smarter, flexible, and resilient power generation infrastructure, especially during peak demand management.

The Global Portable Power Station Market is projected to grow at a CAGR of around 7.2% during the forecast period, i.e., 2022-27. The market is driven by the growing focus of the governments of different countries on developing the energy infrastructure and bringing accessibility to the citizen, even across remote & rural areas, to electricity. It, in turn, is demonstrating a rise in the establishment of power grids and stations.

However, interruptions in these systems and the need for a continued energy flow is escalating too. This aspect is augmenting the demand for Portable Power Stations to attain instant energy supply, especially when there is a power outage, energy, or grid failure, among other such situations.

Besides, since environmental concerns associated with carbon emission have been a prevalent area of focus for many countries, the active role of the governments in encouraging the deployment of portable power stations as a step to decarbonization is also fueling industry growth. The same aspect is also generating lucrative opportunities for the leading players to increase their production & distribution capacities, expand their product portfolio, and widen their visibility & consumer base across locations in the coming years. For instance:

Moreover, emerging trends and popularity among people for camping, fishing, adventure, and leisure, among others, are also demonstrating a rise in the sales & demand for portable power stations principally to access electricity anywhere and contributing to the market expansion.

In addition, as governments are encouraging different industries and people to make paradigm shifts to renewable resources for power generation & utilization, portable power stations hint toward massive potential in the coming years.

Many prominent players are bringing advancements & development in technology and introducing portable power stations that can recharge using renewable resources like solar power. Such initiatives are substantially supported by the governments of different countries worldwide, leading the market toward expansion in the future.

Furthermore, the compact sizes and easy-to-carry & transport portable power stations than conventionally used diesel & gas-powered generators for electricity are also driving the adoption of these systems and contributing to the overall market growth.

As the utilization of electronic appliances is growing swiftly among people, principally to attain greater convenience, power consumption is elevating too. However, since some appliances & devices need an uninterrupted energy supply to function, the need for portable power stations is rising & instigating the leading players to increase their production & distribution capacities to cater to the burgeoning demands worldwide. This escalated demand is also triggering the manufacturers to bring power stations to support many devices & electronics like televisions, smartphones, and desktops in the consumer goods industry.

In addition, the medical sector is also utilizing these stations to run equipment like diagnosis & dialysis machines and heart rate monitors, alongside the industrial sector, for appliances including robots, routers, and switchboards, among others. Due to such utilization of electronics, manufacturers are pushed to introduce consumer-friendly devices, including portable power stations & meet their needs & convenience while expanding the market through 2027. 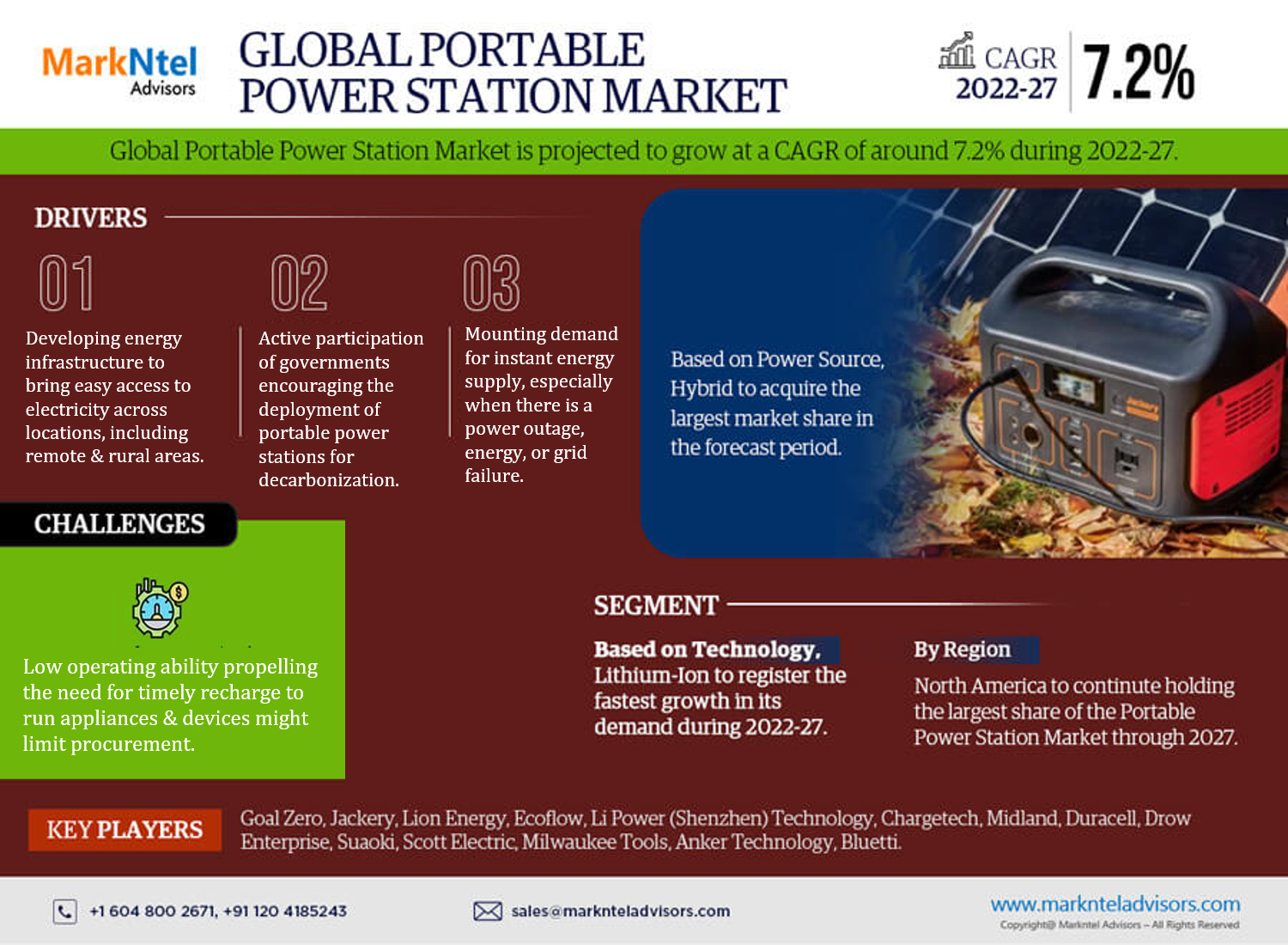 Here, Lithium-ion technology is anticipated to make significant contributions to the expansion of the Global Portable Power Station Market and generate lucrative opportunities for the leading players during the forecast period. The growth attributes to the easy availability of batteries exhibiting these technologies at affordable prices, attracting a substantial consumer base.

Besides, since Lithium-ion technology manufacturers minimize the operational costs of power stations and make these devices much lighter & compact, the overall energy density is attained higher than counterparts like a lead-acid power station.

Hence, with such capabilities, the popularity of these technology-based portable power stations is elevating rapidly and contributing to the market growth. These factors are also generating growth opportunities for the leading players to increase their production & distribution capacities and cater to the burgeoning demands globally.

Moreover, the growing awareness among people about the benefits of Lithium-ion based portable power stations like faster charging, impressive durability, & eliminated voltage drop until battery exhaustion, among others, are hinting toward an upswing in demand for portable power stations with Lithium-ion technologies worldwide. It, in turn, is playing a prominent role in contributing to the market expansion through 2027.

Based on Sales Channel:

Here, the Online sales channel is anticipated to demonstrate the fastest growth in the Global Portable Power Station Market during the forecast period. It owes principally to the growing penetration of the internet & utilization of smartphones, making online channels a primary place to shop goods. It, in turn, is instigating the players to make a paradigm shift to online platforms, catering the consumer needs.

Besides, growing encouragement by the governments of different countries for digitalization is also stimulating the online platforms and instigating the player to offer their products on these channels. It is also paving the way for the companies to offer services like door delivery, easy finances, wide options, and exciting deals, among others, and cater to the rising needs globally and expand their consumer base while contributing to the market expansion.

Moreover, the advent of Covid-19 and the imposition of stringent movement restrictions & lockdowns also contributed substantially to the popularity of the online sales channels, as more and more people viewed these platforms as a convenient mode to purchase goods, including portable power stations while abiding by the laws.

On the geographical front, the Global Portable Power Station Market expands across:

Here, North America acquired the largest market share in the previous years and is anticipated to prevail in the same dominance during the forecast period. This dominance attributes to different countries like the US & Canada being early adopters of advanced technologies & appliances, augmenting the sales of portable power stations.

In addition, the growing cases of fluctuations & interruptions in power supply entwined with the high adoption of electric devices across different sectors in the region, the dependency & demand for portable power stations are widening rapidly and contributing to the market growth. The same aspect is also instigating the leading players to increase their production & distribution capacities and cater to the burgeoning demands.

Besides, the presence of several prominent players and their active participation through the introduction of new products is another factor fueling the market growth across North America.

Moreover, as more and more people are showing popularity toward activities like camping, adventure, fishing, and recreational traveling, among others, the sales of portable power stations are further rising, especially across the US, and driving the market in North America.

A. The Global Portable Power Station Market is projected to grow at a CAGR of around 7.2% during 2022-27.

A. Since portable power stations are battery-powered, they do not have substantial functional capacities like diesel generators, owing to which their application can be limited. This aspect might slow the demand & sales of these stations and restrain the fledged growth of the Global Portable Power Station Market in the coming years.

A. With the swift escalation in the utilization of smart electronic devices across the globe, the sales of portable power stations are accelerating and are a key trend in the market.

A. Lithium-ion technology is anticipated to emerge as an area of remunerative opportunities for the leading players in the Global Portable Power Station Market during the forecast period.