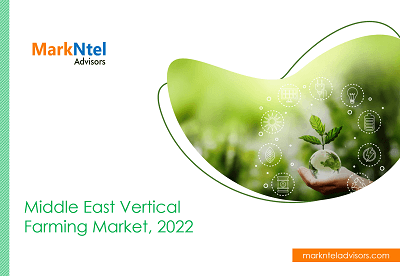 Vertical farming is the practice of growing food on vertically stacked layers or structures, such as shipping containers, skyscrapers, or repurposed warehouses. Controlled Environment Agriculture (CEA) and Indoor farming are the technologies used in vertical farming where all the environmental factors, including humidity, temperature, light, etc., can be controlled easily. The primary goal of vertical farming is to maximize agriculture output using limited space & minimal resources like energy & water, and it is witnessing increasing demand across the Middle East & Africa.

The Middle East Vertical Farming Market is projected to grow at a CAGR of around 18.76% during the forecast period, i.e., 2022-27. Due to the extreme climatic conditions, water & energy are the premium resources in the Middle East region. According to the Alpen Capital’s 2019 GCC Food Report, nearly 85% of food consumed in GCC countries is imported due to water scarcity, extreme climatic conditions, and limited arable land.

It has further resulted in food price fluctuations in the region. Also, the unstable socio-political environment has significantly impacted the source countries & trade routes. Hence, these factors are leading to the burgeoning adoption of vertical farming across the Middle East & Africa region for extensive access to nutritious, safe, and affordable food.

However, this kind of agriculture practice can be costly. But consumers across the Middle East are ready to pay a premium price for fresh & green vegetables. Hence, the Vertical farming market is expected to grow significantly in the coming years. 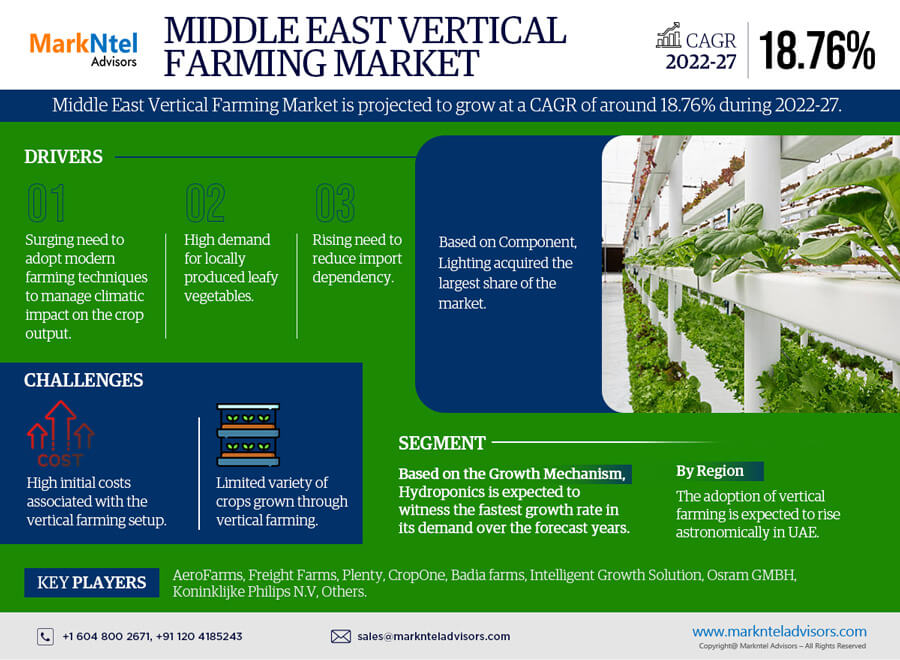 Based on Growth Mechanism:

Here, Hydroponics is anticipated to witness the highest demand & demonstrate the fastest growth in the Middle East Vertical Farming Market during the forecast period. Since different countries in the region are water scarce, Hydroponic, being the most water-efficient farming method, is gaining swift momentum.

These farming techniques are becoming popular due to their capability to cultivate crops without soil and by using mineral nutrient solutions in water. Besides, growing awareness among people about these techniques being the most water-efficient approach in farming, helping reduce soil-related problems like adverse effects of pesticides & soil-borne insects are also stimulating their demand and driving the market.

Moreover, other benefits like less capital investment than other growth mechanisms, higher return on investments, & ease of setup, and more are also boosting their widespread demand across the Middle East. Furthermore, the full ability of vertical farming can be achieved easily by hydroponics in a climate-controlled environment. Hence, the demand & popularity of hydroponics is increasing and driving the overall market growth.

Here, Hardware components like Lighting acquired the largest share of the Middle East Vertical Farming Market in recent years. It owes principally to fulfilling the sunlight needs for the production & growth of the crops. Since vertical farming is done inside a closed building and is highly dependent on artificial lights for its positive result, the demand for lighting components is escalating rapidly as a substitute for sunlight.

The favorable conditions are attained by varying the intensity, range of the spectrum, color temperature, and luminous efficiency of artificial light for the growth of specific plants. Hence, with the growing awareness among farmers about these benefits, the demand for lighting components is mounting rapidly and aiding the overall growth of the vertical farming market across the Middle East.

Besides, to address climatic challenges and reduce dependency on weather, several prominent players are integrating technologies like the Internet of Things in Vertical Farming to widen the utility of artificial lighting. It, in turn, shall further enhance the yield, crop health, and overall growth rate of the plants, thereby stimulating the market growth across Middle East.

Here, the UAE is anticipated to emerge as an area of opportunities for the players in the Middle East Vertical Farming Market & contribute significantly to the industry growth in the coming years. It owes principally to the rapidly growing adoption of Vertical Farming in the UAE due to the mounting water scarcity, limited arable land, & scorching temperatures, alongside the exponentially growing population with high food consumption demands, augmenting the demand for a technologically advanced approach to enhance food production capacity & security in the country.

These aspects are fueling the practice of vertical farming as an energy & water-efficient approach for food production, where crop remains unaffected by the weather, and attracting substantial government investments for the set-up of these farms and stimulating the market. By eliminating the complex chain of processing & distribution wherein chances of food spoiling are high, the said approach shall help the country reduce food losses. Hence, these aspects indicate the increasing use of vertical farming across the UAE.

Several countries in the region are actively working on enhancing their capacities for vertical farming to minimize imports from other countries, bring self-sufficiency, and increase food security for the mounting population in the region. Such aspects are hinting at the roles of different countries, where the UAE is the most prominent.

The government of the UAE has laid out projects associated with vertical farming that are further incorporated with private players to escalate food security. As a result, the UAE Ministry of Climate Change & Environment has allotted space for the construction of 12 vertical farms by players like Shalimar Biotech Industries and a vertical farm for Emirates Airlines by Crop One Holdings Inc, the world’s largest farm.

Besides, as approximately 90 percent of food is imported into the UAE, issues like water scarcity & small percentages of arable land are upsurging the need for solutions like vertical farming as vital to bring food security in the region.

Moreover, Mariam Al Mehiri, Minister of Future Food Security and a leading campaigner of urban farming, reveals his plans to build a ‘Food Valley’ or a technology hub that is entirely dedicated to the development of food & farming automation. Alongside these plans, several other government initiatives are also in line to attract & enable farmers to bring sustainability to the system.

On the other hand, Abu Dhabi is also making significant contributions to the industry and recently invested $100 million in indoor farming & a new research facility to enhance vertical farming methods & technology.

Since many countries in the region are highly dependent on imports for food, the need to minimize this dependency is elevating rapidly. Especially amidst the Covid-19 pandemic, when the governments imposed movement restrictions and trade bands, food security was challenged due to hindrances in imports. This aspect played a prominent role in bringing a reality check to the countries and instigating them to attain food security using advanced technologies and farming methods like vertical farming, leaving no challenge (like water scarcity & unavailability of arable land) unaddressed. It, in turn, demonstrated a rise in the practice of vertical farming and its positive influence on market growth.

A. Mounting the need to minimize import dependency & bring food security is the prominent aspect driving the market across the Middle East. On the other hand, the limited variety of crop cultivation & high initial set-up costs is the factors that might restrain the fledged growth of the Middle East Vertical Farming Market in the forecast period.

A. Hydroponics is anticipated to emerge as an area of remunerative opportunities for the leading players in the Middle East Vertical Farming Market during the forecast period.

A. “UAE” would offer substantial growth prospects in the Middle East Vertical Farming Market during 2022-27.