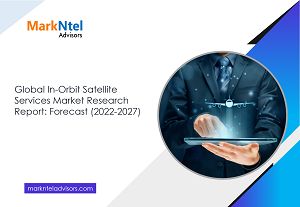 The Global In-Orbit Satellite Services Market is projected to grow at a CAGR of around 98.47% during the forecast period, i.e., 2022-27. The market has witnessed steady growth in the historical years, owing to the increased adoption of in-orbit satellite services by satellite operators for required on-time maintenance. In-orbit satellite services are the technological transformation in the NewSpace sector that aims to replace the damaged parts on satellites, enhance the life span of satellites, and reduce the cost of launching new satellites, further bolstering the market growth.

Furthermore, there has been an increasing influx of funds and collaboration of private & government organizations with aerospace companies to develop and improve in-orbit satellite services, further contributing to the market expansion. For instance,

Hence, such strategies by the associations in the NewSpace market are estimated to maintain the demand frequency of in-orbit satellite services in the forthcoming years. Thereby, augmenting the growth of the Global In-Orbit Satellite Services market. 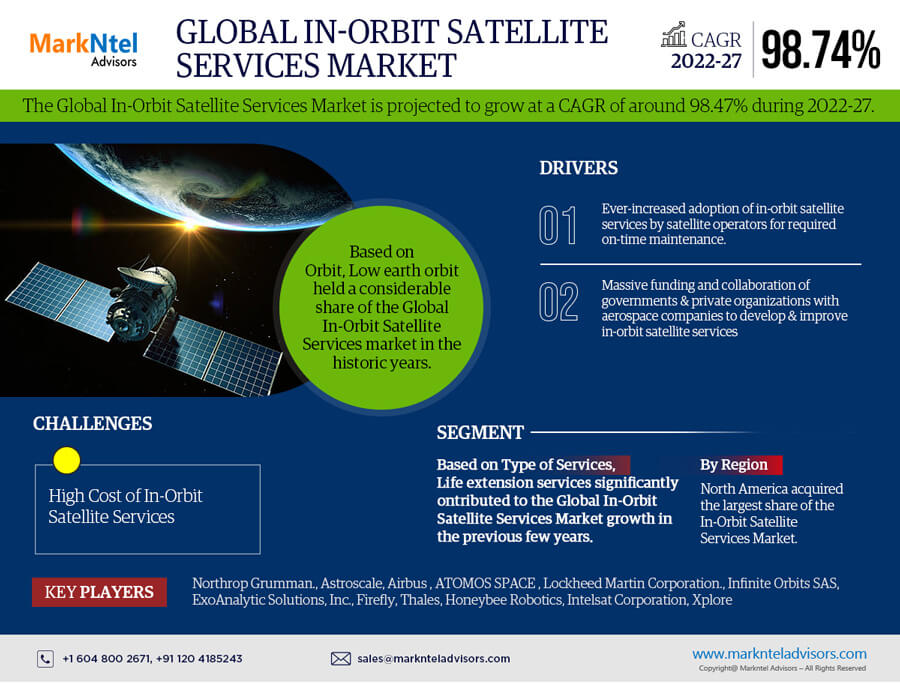 Based on Type of Services:

Here, the commercial segment grabbed a sizeable share in the Global In-Orbit Satellite Services market. It owes principally to the rapidly growing presence of commercial satellites in space. Several countries, such as the US, China, the UK, etc., are working to strengthen their communication systems, further driving the need for better commercial satellites. In addition, the fast emergence and deployment of 5G network connectivity worldwide have also been amplifying the demand for commercial satellites for the last few years, thereby strengthening the industry.

Here, North America acquired the largest share of the market in the previous years and is anticipated to prevail in the same trend during the forecast years. This dominance attributes principally to the active participation of countries like the US and Canada through various space launch services and their upcoming projects in the line. In addition, the government of the US laying out favorable policies to attract key players with investments in several research & development activities for in-orbit satellite services is also making substantial contributions to the industry growth. For instance:

In 2016, Intelsat, one of the biggest satellite fleet operators globally, endorsed the state-of-the-art satellite servicing capabilities of Orbital ATK on an enormous level. Such an endorsement might be the prominent factor backing the acquisition of Orbital ATK by Northrop Grumman last year.

Geostationary satellites are placed in Earth’s orbit at the height of 35,800 km directly over the equator that revolves from east to west consequently keeping it in the same position above Earth. The rising demand for geostationary satellites in several countries such as the US, India, the UK, China, etc., for various purposes such as monitoring volcanic ash, measuring cloud temperatures and water vapor, oceanography, measuring land temperature and vegetation coverage, etc., has been fueling the demand for in-orbit satellite services. In addition to this, satellite operators have started adopting in-orbit satellite services in order to reduce their operating costs as well as to extend the life span of their launched satellites.

Furthermore, the demand for geo satellites has also been growing, owing to the concerns of predicting and monitoring natural disasters like a cyclone. This has led to a sizable investment being done in the launch and operations of geo satellites. Therefore, the increasing launch of geo satellites for the respective reasons would require in-orbit satellite services such as life extension, refueling, repair, etc., in the forecast years.

As satellite maintenance services are extensively expensive due to the requirement of launch systems & precision expertise in the satellite and other allied technologies to be maintained in space, the capital requirement has been on the higher side for the new players. Therefore, the higher cost of In-orbit satellite services is posing a threat to new entrants in the industry.

A. Rising demand for geostationary satellites worldwide is expected to drive the Global In-Orbit Satellite Services Market during 2022-27.

A. ‘North America’ is anticipated to dominate the Global In-Orbit Satellite Services Market during 2022-27.

A. High Cost of In-Orbit Satellite Services are expected to hamper the market growth during 2022-27.