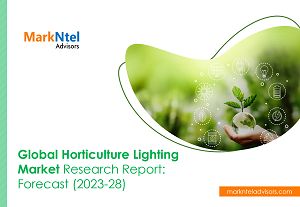 Horticulture mainly deals with ornamental plants, garden crops, fruits, and vegetables. And artificial lights deployed to enable photosynthesis in such settings, when lacking natural daylight, are referred to as Horticulture lighting.

These are adopted in numerous urban farming applications such as indoor farming, vertical farming, greenhouses, and others to upscale the plants' growth. Since this practice requires specialized lighting, usually a mix of different wavelengths needed for plant development, the manufacturers focus on several parameters that help in measuring the optimal lighting and photosynthetic photon flux (PPF).

The Global Horticulture Lighting Market is projected to grow at a CAGR of around 21.1% during the forecast period, i.e., 2023-28. The market is driven by the exponentially rising population throughout the world entwined with a rapid climate change, resulting in greater food demand and immense pressure on the agriculture industry. Such swift augmentation in need can only be satiated through additional modern ways like indoor farming that requires horticulture lighting. Additionally, the growing propensity for home-grown fruits and vegetables fuels the market during the forecast period.

Besides, with the government demonstrating keenness in promoting the adoption of Controlled Environment Agriculture (CEA) practices and SSL technology, the market for horizontal lighting is anticipated to grow substantially in the forecast years. In addition, the vast influx of funds encouraging vertical farms & greenhouses projects, alongside the ongoing legalization of cannabis cultivation is further boosting the foothold of the players in the market.

Another prominent factor observing a positive influence on the market is a sudden rise in health consciousness after the pandemic, leading to more inclination toward healthy and organic food and thus furthering horticulture practices.

Moreover, the sudden shift towards sustainable living leads to the adoption of such light as they comply with the proper safety and performance requirements, further contributing to the market expansion. Furthermore, practices such as vertical framing and greenhouse are anticipated to emerge as an area of remunerative opportunities for the leading players in the Global Horticulture Lighting Market during the projected time frame.

Based on Lighting Type

Here, Inter lighting segment acquires the major revenue share in the market during the forecast period. Such dominance can be credited to its consummate ability to proportionally distribute the lights in the canopy that otherwise tends to receive lesser lights in lower and middle levels. With relatively improved light efficacy, the Inter lighting led to higher yields as compared to other variants. Besides, the sudden rise in the number of greenhouses for cucumber and tomato agriculture further acts as a catalyst to the market.

Among all, the Vertical Farming segment is anticipated to drive the Global Horticulture Lighting Market in the historical period. It owes principally to its immense potential in coping with unpredictable land areas and environmental growth. On top of it, the insignificant requirement of soil and water projected by Vertical Farming ultimately leads to enhanced crop harvest, further bolstering the market growth. Such minimal maintenance makes them the most suitable for urban farming, citing lesser available area in urban setup for growing crops, thereby facilitating market expansion.

On the other hand, the Greenhouse segment procured a substantial revenue share in the Global Horticulture Lighting Market in 2021. Owing to their compatibility with plants that need no extra care with stable climatic conditions, greenhouses are considered the better options, among others, as they autonomously regulate the temperature and prevent plants from perishing. Probably, it is why the Greenhouse segment is anticipated to let the market flourish during the forecast period.

Europe demonstrates a significant shareholding and thereby dominates the Global Horticulture Lighting Market in the historical period. Such dominance can be attributed to numerous factors. One would be the availability of relatively larger areas for cultivation. In addition, being the home to one of the strongest economies enables the region to attract substantial investment from neighborhoods and poses higher capital investment capabilities.

In fact, countries like France, Italy, Netherlands, and Spain, inhibiting massive area under greenhouse cultivation, emerges as an area of remunerative opportunities for the leading players in the Global Horticulture Lighting Market.

Besides, the frequent adoption & upgradation of LED horticulture lights from being additional lighting sources to a primary light sources for indoor farming. Moreover, to fulfill the emerging needs for frozen fruits & vegetables demonstrated by the region’s growing population, the farmers plan to reduce the import dependency by producing them domestically instead. For instance,

The increased deployment of horticulture lighting in numerous agricultural applications, including urban farming, supplemental lighting, cultivation without daylight, and multilayer cultivation, provides the necessary impetus to the market for the projected timeframe. Further, the growing vertical farming applications and greenhouse projects enthrall the market. Additionally, the population boom for the past few years, instigating the farmers to go indoors and utilize every bit of resource to cater to the up-scaling needs, further propels the market through 2028.

Intricacies involved in deploying CEA technology tend to hinder market growth as it poses additional requirements in terms of nutrients, light, water, and climate control devices for plants' overall development, resulting in enhanced costs for overall harvest. That said, it is quite challenging to supervise and facilitate such practices, especially in larger fields. It directly impacts the design and development of horticulture lighting fixtures for plant growth. Therefore, the increased cost and effective management pose challenges to the stakeholders.

With the advent of the farm-to-table concept, access to local food in cafeterias, restaurants, food joints, and other locations has become easier and more flexible. Hence, people are now developing an affinity for locally grown foods which is why they are expected to gain popularity across different markets within the hospitality industry in the coming years. And therefore, the need for such grow lights facilitating on-time delivery of yield in the case of farm-to-table restaurants arises. Such trends owing to their significant impact, are supposed to amplify market growth.

A. The growing propensity for home-grown fruits and vegetables, widespread adoption of horticulture lighting in numerous agricultural applications, and surge in the number of government initiatives to encourage the adoption of CEA practices and SSL technology are the possible factors expected to drive the Horticulture Lighting Market during 2023-28.

A. ‘Vertical Farming’ is anticipated to emerge as an area of remunerative opportunities for the leading players in the Horticulture Lighting Market during the forecast period.

A. Europe is expected to dominate the Horticulture Lighting Market during 2023-28.

A. Growing farm-to-table trends encourage the need for horticulture lights and thereby drive the Horticulture Lighting Market through 2028.