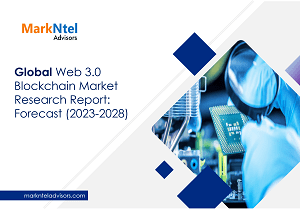 Web 3.0 (Web3) is the third generation of the evolution of web technologies. It is basically an idea for a new iteration of the World Wide Web, which integrates concepts such as blockchain technologies, decentralization, and token-based economics. Web3 will enable users to control their own data.

The Global Web 3.0 Blockchain Market is projected to grow at a CAGR of around more than 50% during the forecast period, i.e., 2023-28. The market is characterized by the decentralized internet ecosystem, paired with blockchain technology that results in increased consumer usefulness and openness. The inclusion of such innovative technologies would revolutionize internet usage by enabling users to sell, purchase, own, and profit by converting their digital material into NFTs (Non-Fungible Tokens). Web 3.0 aids zero-knowledge proofs and more secure personal data to be used in digital infrastructure. other than this, it also supports peer-to-peer digital financial transactions.

Unlike Web 1.0, which started from read-only versions, Web 2.0 pushed the horizon a bit more by letting users not just read and write but upload, publish and receive text, pictures, and videos over the internet, as well. Now, Web 3.0 is much beyond with advanced internet penetration, real-time communication, and increased transparency facilitated by blockchain technology. With a better user interface, in terms of personalized content and speech and voice recognition features, Web 3.0 is expected to usher in a considerable paradigm shift like previous version. With extensive applicability exhibited by cryptocurrency, conversational AI, data & transaction storage, payments, and others, the web 3.0 industry is likely to traverse an upward trajectory in the coming years.

Further, the blockchain technology in the third generation of the web would aid in securing intellectual property and personally identifiable information (PII) through NFTs conversion. Thus Web 3.0 has the potential to emerge as an opportunistic area for the market players owing to the predicted extensive adoption paving the way for many blockchain applications, such as smart contracts and decentralized applications (DApps), in the forecast period. Smart contracts are expected to minimize or eliminate the need to rely on a centralized organization (like a bank) in order to maintain data integrity. Similarly, Easy tracking on a distributed ledger using blockchain technology further decentralized the data transfer mechanism, facilitating consumers more hassle-free and unparalleled experience. Besides, the growing popularity of Metaverse is likely to open up new avenues for the entertainment industry in the coming years. For instance,

Among all, the Public segment acquired a significant revenue share in the web 3.0 blockchain market in the historical period and is expected to remain dominant in the forecast years. It owes principally to its extensive accessibility feature and decentralized network, enabling the users to enter the chain by eliminating the need to get authorized by some regulating entity. Besides, the trait of remaining unedited makes the Public Blockchain entry more secure. Perhaps, it is why cryptocurrencies such as Bitcoin, Ethereum, Dogecoin, and Litecoin, have gained popularity in recent years. Moreover, several new ideas relating to its utilization as a voting platform or medical records tracking medium are projected to bring versatility and flexibility in the digital era in the coming years. Thus governments worldwide, especially in developed countries, are emphasizing the adoption of blockchain for numerous applications owing to its transparency and openness. These factors are likely to stimulate the growth of public blockchains, thereby prompting market growth in the coming years. For instance,

Here, North America grabbed a significant market share among other regions, and its dominance is likely to prevail in the same trend during the forecast period. The growth primarily attributes to the expanding blockchain adoption by the tech giants across the region. Besides, increasing investment in cryptocurrencies further drives the market forward in the forecast period. As such, many formerly hesitant investors have now begun to rely on the long-term future of these decentralized technologies. Thus, they are willing to invest in blockchain technology required by payment and wallet solutions, smart contracts, and digital identity detection solutions to be implemented in industries like retail, government, and BFSI. Additionally, the strong presence of companies aiming for superior and far better web generations in the future is likely to exemplify the industry growth in the coming years.

The industry growth is primarily attributed to the unique features of web 3.0, including decentralization, enhanced connectivity with other systems, User-Generated Content (UGC), etc. With distributed networks, the transactions exhibit extreme transparency while ensuring that no tampering has been done with the data. Thus, the technology aid in making transactions recordable and irreversible, enabling customers to benefit during audits. The technique also facilitates users with direct communication over the internet by becoming a part of a Decentralized Autonomous Organization (DAO). With increased transparency and accountability, blockchain technology has prompted the emergence of a transparent and responsible digital economy in recent years.

Possible Restraint: Minimal Familiarity of Users with The Generation of Web

The tech behemoths such as Facebook, Microsoft, Google, and Amazon have witnessed constant criticism in the name of aggressive business practices, unethical AI use, and customer data usage. This escalated concern related to data privacy has brought a paradigm shift in the adoption of web 3.0. However, the minimal familiarity of consumers with this evolving version has restrained the large-scale incorporation of these technologies in recent years. Given the dearth of awareness regarding Web 3.0, higher dependency on Web 2.0 amongst end-users is likely to continue during the forecast period, thereby impeding the market growth.

A. Increased transparency with the decentralized network is the prominent factor driving the Web 3.0 Blockchain Market during 2023-28.

A. Public segment is anticipated to emerge as an area of remunerative opportunities for the leading players in the Web 3.0 Blockchain Market during the forecast period.

A. Globally, North America would provide lucrative prospects for the Web 3.0 Blockchain Market in the years ahead.

A. Minimal familiarity of users with the new version of web is likely to impede the growth of the Web 3.0 Blockchain Market during 2023-28. 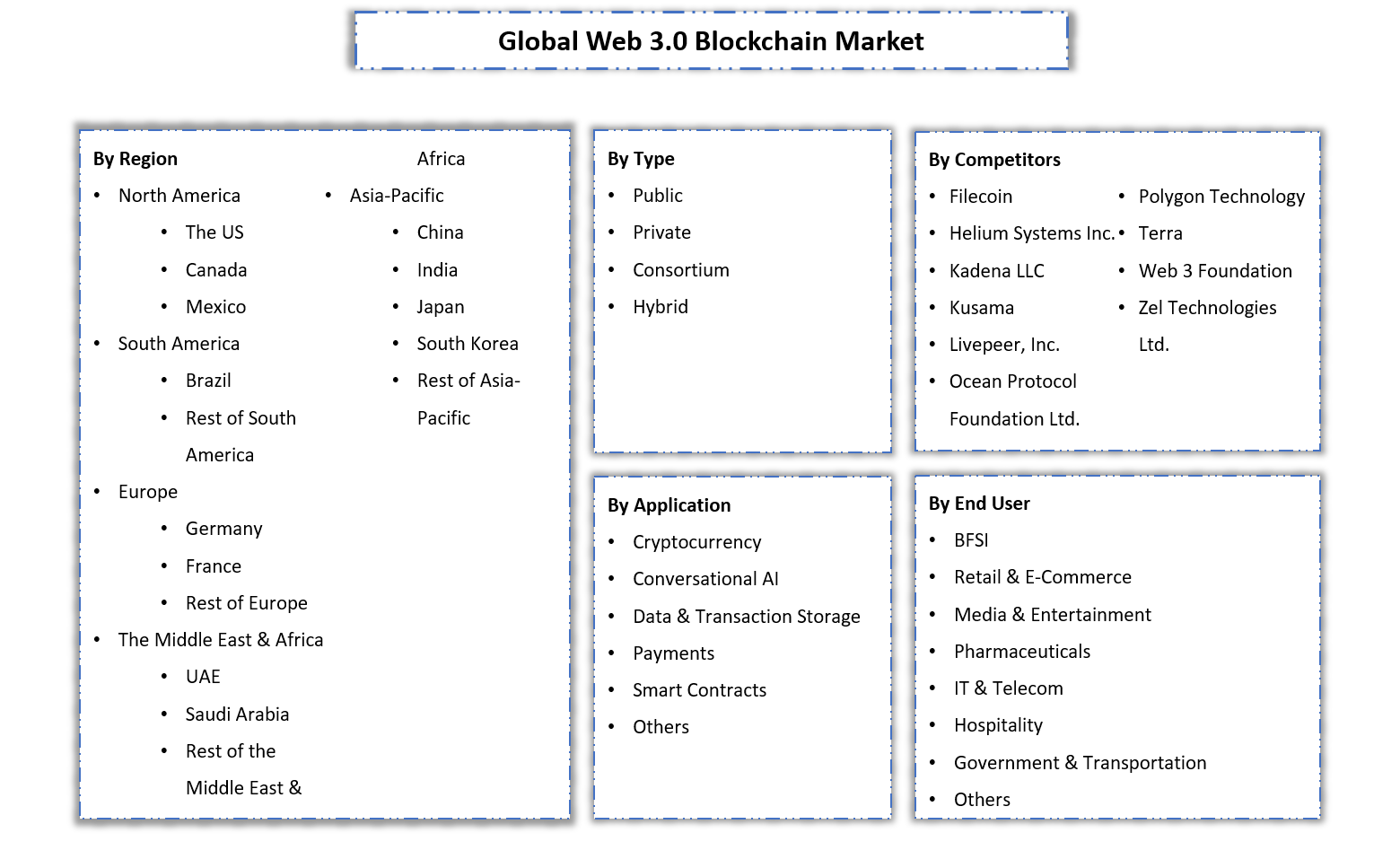