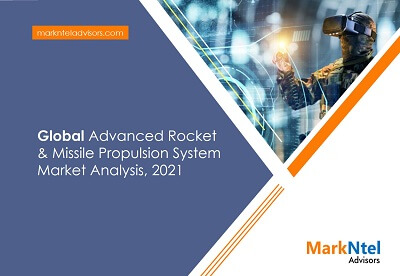 Rockets & Missiles are weapons used mainly by the defense forces of different countries for space exploration activities and to keep their national security intact. These systems also carry explosive warheads to the targets with the help of rocket propulsion.

The Global Advanced Rockets & Missiles Propulsion System Market is projected to grow at a CAGR of around 9% during the forecast period, i.e., 2021-26. The growth of the market is likely to be driven primarily by the rapidly increasing geopolitical tensions worldwide compelling governments of different countries to increase their defense budgets & invest substantially in procuring advanced rockets & missiles to enhance their national security. It, in turn, is positively influencing the demand for propulsion systems for advanced rockets & missiles and generating growth opportunities for the leading players in the global market.

Besides, constant technological advancements in propulsion systems are also driving the market. These breakthrough technologies, including innovations in the liquid & propellants or a mixture of both in rockets & missiles, are likely to instigate space exploration & launch activities and, as a result, enable rapid market expansion.

However, substantial costs associated with developments in rocket & missile propulsion systems and lack of reliable & efficient micro-propulsion systems are a few crucial aspects that might act as growth restraints for the Global Advanced Rocket & Missile Propulsion System Market during 2021-26.

With the advent of Covid-19 in 2020, several industries worldwide observed a decelerating effect, and the Global Advanced Rocket & Missiles Propulsion System Market was no exception. Since the advent of the global crisis, the defense industry has observed unprecedented challenges, where several countries cut short their defense budgets to address critical issues associated with the dreadful disease & curb its spread.

While the governments of most countries imposed stringent movement restrictions & lockdowns, a majority of manufacturing industries had to shut their operations. Additionally, reduced funding, severely disrupted supply chain of raw materials, delayed deliveries of pre-produced goods, and a temporary halt on several R&Ds in testing rockets & missile technologies were the new challenges introduced to the market. Besides, the funding toward the defense industry was also affected since most countries were focused on restraining the spread of the virus & strengthening the healthcare infrastructure.

However, with the gradual improvement in the pandemic situation displaying a swiftly reducing number of cases, the governments uplifted the restrictions since 2021 and allowed the recommencement of business operations. As a result, the market revived with a flowing supply chain & resumed research & development activities. Moreover, several leading players in the market are immensely investing in introducing new technologies, which would enable the market to regain its usual pace & recover from financial loss over the forecast years. 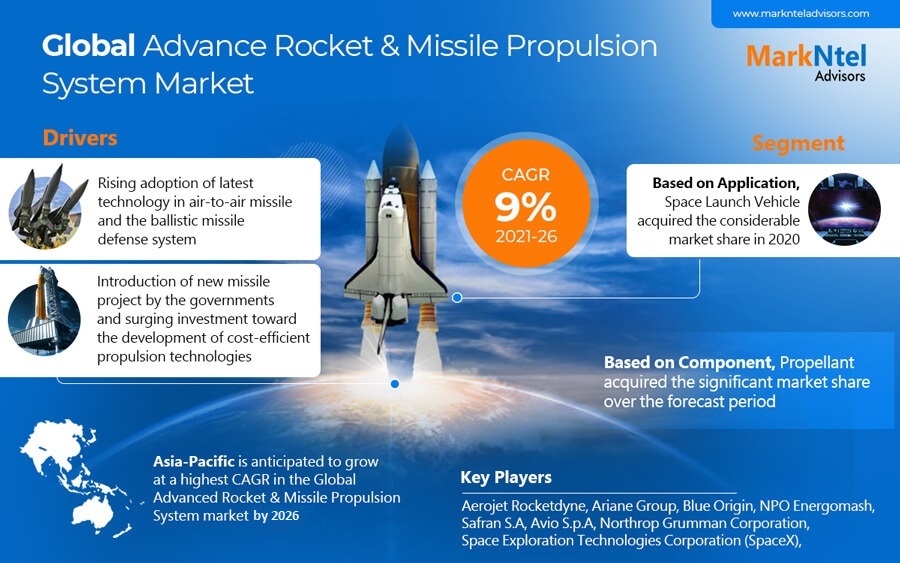 Based on the Propulsion Type:

Of them all, Solid Propulsion Rocket Motors accounted for the largest market share in recent years & the same trend is likely to be followed in the coming years due to the rapidly increasing demand for solid fuel in ballistic missiles owing, especially to its easy storage & a large amount of thrust. Moreover, these propulsion systems have immense energy content, which benefits the payload, range, & target.

On the other front, Liquid fuels shall acquire a significant share in the global market during 2021-26, owing prominently to their mounting demand to provide a high impulse rate irrespective of the involvement of solid fuel. Basically, Liquid fuels are hydrocarbons, and loading missiles with these fuels can be challenging.

Based on the Component:

Here, Propellants acquired a significant market share and are likely to prevail the same trend over the forecast years. It owes majorly to the increasing adoption of rockets & missiles by numerous countries worldwide to strengthen national security entwined with the surging demand for competent & advanced thrust generating propellants for various rocket & missile launches. Moreover, rapid technological advancements in enhancing the thrust generations in propellants & innovations in their composition shall further contribute to the overall market growth during 2021-26.

Of them all, North America dominated the market with the largest share in recent years and shall continue dominating the market during the forecast period, too. It owes principally to the rapidly increasing need to procure advanced rockets & missiles, especially in countries like the US & Canada, to strengthen their defense capabilities & execute military missions.

On the other hand, Europe accounted for the second-largest market share in recent years, mainly on account of the extensive presence of prominent market players & their massive investments in developing technologically advanced propulsion systems for advanced rockets & missiles, thereby promoting the regional market expansion.

Nonetheless, Asia-Pacific is expected to observe significant market growth during the forecast period. It attributes majorly to the rapidly increasing defense budgets & the mounting need to strengthen national security by procuring technologically advanced defense systems due to surging geopolitical tensions & terrorism across the region.

In the region, substantial investments by countries like China & India in numerous space exploration activities are likely to boost the regional market in the coming years.

Besides, a swiftly escalating participation of several prominent players & government associations in the market for the development and demonstration of reusable rockets technology to reduce the cost of every launch shall further boost the market in the years to come.

A. The Global Advanced Rockets & Missiles Propulsion System Market is projected to grow at a CAGR of around 9% during 2021-26.

A. Propellants are anticipated to emerge as an area of remunerative opportunities for the leading players in the Global Advanced Rockets & Missiles Propulsion System Market during 2021-26.

A. Massive expenditure by leading companies in the Global Advanced Rockets & Missiles Propulsion System Market on bringing innovations in propulsion systems of advanced rockets & missiles would enable the market to regain its usual pace & recover from the losses in the coming years.