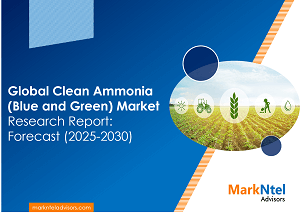 Clean ammonia is produced using carbon-neutral or low-carbon technologies. It comprises both blue & green ammonia. Blue ammonia is produced using fossil fuels as an energy source via methane pyrolysis, and the carbon emitted during the process is sequestered. Green ammonia, on the other hand, is produced through the electrolysis of water, using electricity generated from renewable sources, such as solar & wind power. The clean aspect of ammonia primarily refers to the production of low-carbon hydrogen.

Ammonia is formed when hydrogen produced by either method, blue or green, is combined with nitrogen captured from the air. Further, with the increasing inclination to reduce carbon emission intensity in agriculture, maritime, and other sectors, the market for clean ammonia is anticipated to fuel at a significant rate in the forthcoming period.

Besides, clean ammonia finds applications across different industries, such as the food & beverage industry, agriculture, pharmaceutical, water & wastewater treatment, other chemicals, pulp & paper, etc. As a result, the need for quicker development & production is escalating and generating growth opportunities for the leading players to increase their research & development activities and show more participation in the overall growth of the Global Clean (Blue & Green) Ammonia Market.

In addition, the unceasing demand for fertilizers from the agriculture sector, coupled with rapidly expanding pharmaceutical & food & beverage manufacturing and water & wastewater treatment facilities, among others, are also expected to drive the commercial application of clean ammonia in the coming years.

Moreover, alarming emission from the excessive utilization of grey & brown ammonia is also escalating the necessity for clean ammonia as an alternative to address such concerns and bring environmental sustainability in the coming years. According to the Royal Society, around 1.8% of the total global carbon emission is generated by producing ammonia using traditional methods.

Furthermore, the elevating impact of climate change due to the astonishingly increasing carbon emissions across the globe is another aspect instigating different countries to adopt & integrate zero & low carbon technologies, mainly in heavy industrial processes. Not only the countries but several biggies in the market are re-analyzing their carbon footprint & investing substantially in the research & development & implementation of advanced carbon-neutral solutions. For instance: 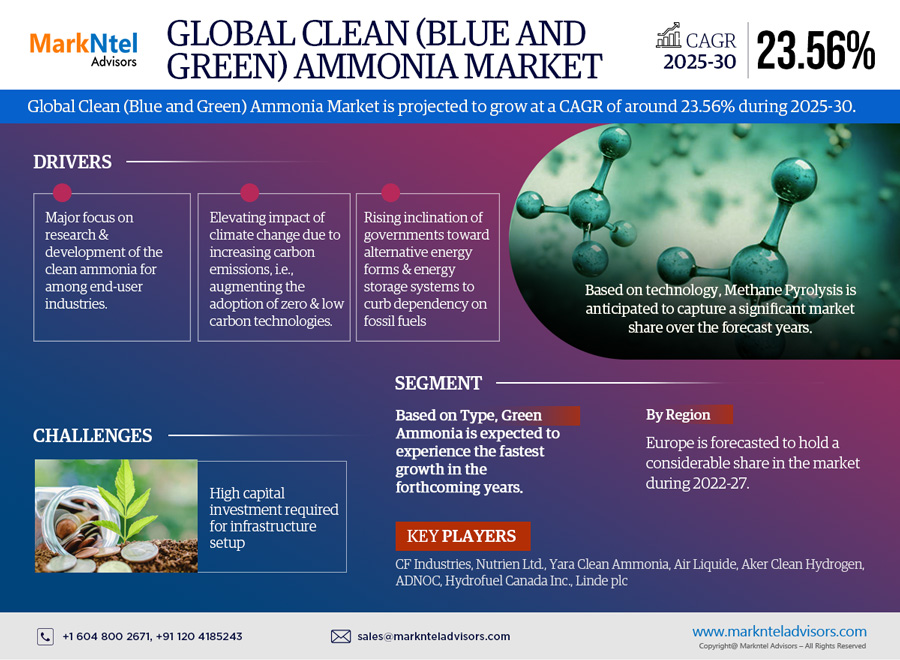 Here, Green Ammonia is expected to experience the fastest growth in the Global Clean (Blue & Green) Ammonia Market during the forthcoming years as the hydrogen produced through water electrolysis does not emit any carbon, hence is no-carbon hydrogen. The rising attention toward renewable sources of energy has been prevailing all over the globe.

Moreover, farmers are becoming increasingly aware of the benefits of green ammonia, like higher farm efficiency, yield, and reliability as fertilizers, minimal maintenance, climatic change resistance, & procured from renewable resources, among others. Such aspects hint toward an up-surging demand for green ammonia & its contribution to the overall market growth in the coming years.

Furthermore, solar & wind energy is seen as critical solutions for nations to meet their net-zero carbon targets. Many green hydrogen plants have been built around the world to help countries become self-sufficient in their demand for hydrogen for various purposes. For Instance:

Additionally, the carbon capture & storage has allowed the technology to maintain its market share until the end of the year. Moreover, the technology is still expected to retain its major part of the market share but would witness slow growth in comparison to its counterpart, owing to the steady advancement of the green hydrogen & ammonia technologies.

Of them all, the Agriculture & Fertilizer sector is anticipated to hold a considerable share of the Global Clean (Blue & Green) Ammonia Market during the forecast period. It owes principally to ammonia being a key ingredient in fostering plant growth through fertilizers.

Besides, since ammonia is a building block for fertilizers like ammonium nitrate, which releases nitrogen a key nutrient in the cultivation of crops, the growing demand for cleaner alternatives like clean ammonia showcases significant potential in the sector. A majority of these ingredients are used as fertilizer to sustain food production for the exponentially rising population worldwide. Hence, the demand for clean ammonia is anticipated to elevate substantially and lead the Global Clean (Blue & Green) Ammonia Market toward swift growth in the coming years.

In accordance with the United States Geological Survey (USGS), ammonia takes up around 32% of any nitrogen-based fertilizer in the US. The fundamental sector of any economy is the agriculture sector, therefore, the continuously surging demand for agricultural produce would significantly fuel the market for clean ammonia in the coming years.

On the geographical front, the Global Clean (Blue & Green) Ammonia Market expands across:

Of all regions, Europe is forecasted to hold a considerable share in the market during 2025-30. It owes principally to the growing focus of the governments of different countries on addressing environmental concerns like emissions and their massive investment in the development of clean ammonia & clean hydrogen projects in the region. It, in turn, is generating growth opportunities for the leading players to increase their development initiatives for clean ammonia and established facilities throughout Europe.

In recent years, the region witnessed some investments toward the establishment of low carbon hydrogen & ammonia production facilities. Such projects & production facilities are expected to gradually contribute consequentially to catering to the mounting demand for ammonia in the coming years. Some of the recent developments in the region are:

For the past decade, carbon neutrality has been regarded as an urgent necessity. With the rising inclination of the governments toward alternative energy forms & energy storage systems in order to curb the dependence on fossil fuels for satiating daily needs such as electricity, mobility, food, etc., carbon neutrality has been the center of attraction for all the countries across the world. Furthermore, with the astronomical rise in carbon emissions in countries such as China, India, the United States, and several European nations, national governments have undertaken initiatives primarily focused on substituting fossil fuels as an energy source. Consequently, this highlighted the benefits & need for the development of hydrogen & ammonia around the globe.

Clean ammonia is a zero-carbon solution that enables countries to attain their carbon neutrality goals. However, due to the high initial capital investment required for the setup of the clean ammonia manufacturing units, the traditional methods of production & no solution for carbon emission is the most cost-effective process. Currently, on average, clean ammonia costs more than 60% of the cost of grey ammonia globally. Several initiatives & research are being done to control & reduce the price of clean ammonia through the reduction in capital investment.

A. Green Ammonia is anticipated to emerge as an area of remunerative opportunities for the leading players in the Global Clean (Blue and Green) Ammonia Market during 2025-30.

A. The growing inclination towards a carbon-neutral economy, green investments, surging new applications of ammonia such as in transporting hydrogen, etc. are anticipated to drive the Global Clean (Blue and Green) Ammonia Market in the coming years.