Aircraft Central Processing Unit (CPU) refers to the silicon chips located on the computer’s motherboard, used in the aircraft avionics, responsible for processing all the information being collected & displaying it to the mission display computers. The integration of newer fourth- & fifth-generation aircraft and the increasing focus of the large militaries to acquire the respective combat jets in the air force has surged the demand for aircraft manufacturing, which, in turn, has increased the demand for aircraft CPUs.

The Global Aircraft Central Processing Unit (CPU) Market is projected to grow at a CAGR of around 4.46% during the forecast period, i.e., 2022-27. The increasing military expenditure & focus on air mobility are the major factors contributing to the market's growth, which will lead to an increase in CPU demand for commercial & military aircraft. Moreover, several countries, including the US, India, China, the UK, France, Japan, etc., have increased their aviation expenditures exponentially to enhance their air combat capabilities amid escalating geopolitical tensions.

Additionally, the up-gradation of the existing legacy fleet of aircraft to enhance the air combat readiness to match the existing capability of the 4th & above generation of aircraft is also one of the prominent reasons for the rising growth of aircraft CPUs in the coming years. Moreover, the upcoming plans of different countries to replace the old air fleet with newer aircraft would be crucial for the enhancement in the production of military jets and the consequent growth in the demand for CPUs to be integrated into the newer aircraft. 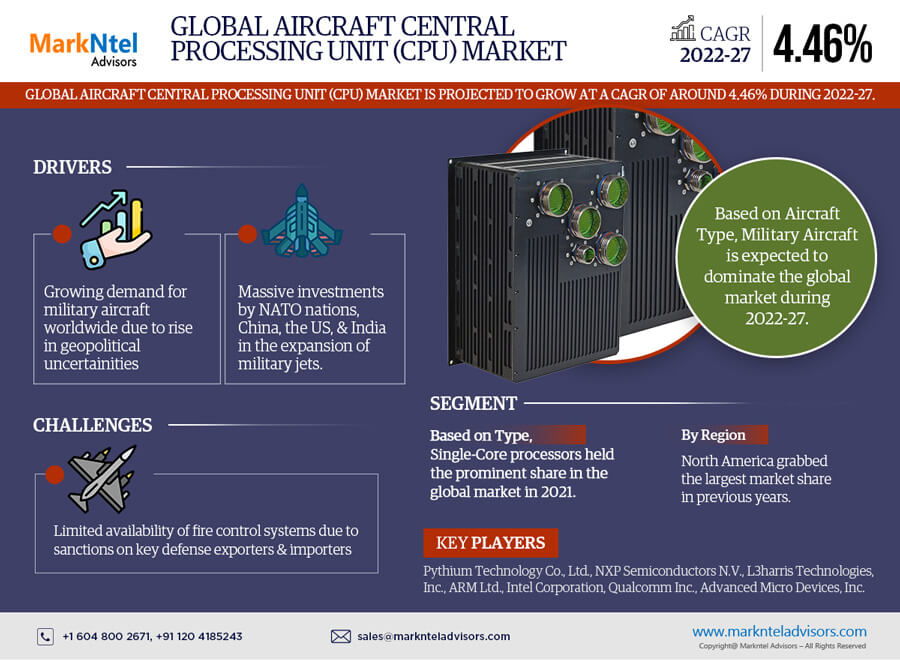 With the growing global population, traffic congestion is on the rise in urban areas. In turn, this has increased the demand for technically advanced transportation systems such as air taxis, manufactured by various aircraft manufacturers, like Lilium, Airbus, Kitty Hawk, etc. Hence, to handle the vast amount of data collected by air taxis, the manufacturing companies will require highly efficient CPUs with better memory & power usage, and improved software & hardware. Furthermore, to reduce the pollution caused by air taxis, various companies are collaborating extensively with governments of several countries across the globe for developing electrical air taxis & their infrastructures.

Besides, the increasing demand for convenient, faster, and more comfortable transportation is propelling the demand for air taxis, which, in turn, would accelerate the need for higher-performing CPUs to control the technically advanced electric air taxis.

Impact of Covid-19 on the Global Market

Due to the COVID-19 pandemic, the aircraft CPU market witnessed a sudden decline, causing challenges & economic problems for the industry. The system integration of aircraft components was severely affected by the first wave in 2020 across Europe & America. Eventually, the manufacturing pipeline of the leading manufacturers such as Boeing, Airbus, Lockheed Martin, etc., faced a delay in execution. Additionally, the instant decline in demand for passenger aircraft due to lowered passenger travel, led by the government's travel restrictions, resulted in the reduction of new aircraft in 2020. According to the International Air Transport Association (IATA), the overall number of flights reduced by 80% as of April 2020, compared to 2019.

Additionally, several existing passenger aircraft like the Boeing 737 Max, among many others, still use Intel 80286, a single-core processor that created a growth opportunity for the demand for single-core processors in North America, Europe & Asia-Pacific markets during 2017-2020. Furthermore, high replacement costs of aircraft would also hinder the penetration of multicore processors, which, in turn, would drive the demand for single & dual-core aircraft CPUs globally during 2022-27.

Of them all, the military aircraft type is expected to lead the Global Aircraft CPU Market during 2022-27. The emerging need of several countries worldwide to strengthen their military capabilities due to the rising geopolitical tensions & trade rivalries among countries such as India, China, the USA, Russia, etc., have encouraged the need for advanced military aircraft production. This, in turn, has contributed significantly to the increasing demand for aircraft processors such as the intel 80186, intel 80836, intel i7 gen, etc., across North America, Europe, & Asia-Pacific on account of the presence of aircraft manufacturing in these regions.

Furthermore, increasing partnerships & strategic agreements for the production & distribution of advanced military aircraft in Europe, Asia-Pacific, and the US have also escalated the demand for aircraft CPUs worldwide.

Geographically, North America grabbed the largest market share in the Global Aircraft CPU Market in 2021, with the high demand for military aircraft coupled with the existence of many leading commercial & military aviation manufacturers, such as Boeing, Bombardier, Lockheed Martin, Northrop Grumman, etc. Furthermore, the US is home to various CPU providers such as Qualcomm, Intel, L3 Harris, etc., which eases the procurement of processors for aircraft manufacturers. In addition, the technological developments in the military aircraft segment in the region are projected to strongly contribute towards creating the demand for CPU in the forecast period. For instance, the US is focused on developing 6th-generation fighter jets to gain superiority in the air combat field.

Moreover, the demand for aircraft central processing units (CPUs) in Europe increased during 2017-2019, driven by the growing focus of European governments to strengthen their military bases, burgeoning air travelers, owing to lower airfares & rising purchasing power of European residents. Additionally, the growing inclination of the European Union towards improving the warfare capabilities to eliminate the threat of enemy air strikes in military warfare & naval aircraft are the key factors that contributed to the rising demand for military aircraft in the region.

Key Drivers: High Demand for Military Aircrafts Across the Globe

Global geopolitical uncertainties, and the growing need to keep a robust air power by the countries such as China, India, etc., have boosted the demand for military aircrafts such as fighter jets, helicopters, airborne early warning & control system aircraft, cargo planes, etc. Moreover, extensive investments have been made by leading countries such as China, the US, the nations of NATO (North Atlantic Treaty Organization), India, Japan, Taiwan, etc., for the expansion of military jets. Among them, the US, India, Russia, and China have been the four largest air forces, contributing to the increase in aircraft manufacturing and overhaul & maintenance of old aircraft.

The growing geopolitical tensions & imposed sanctions on many of the defense exporters such as Russia, Turkey, etc., have restricted the ease of availability of fire control systems to many of the recipient countries. Moreover, defense equipment such as air defense systems, aircraft, naval ships, missiles, etc., requires both replenishment in terms of the availability of the spare parts to maintain & operate the systems on optimum efficiency.

Growth Opportunities: Rising Mandates for the Use of Modular Open System Approach to Boost the Demand for Aircraft CPU

Aircraft manufacturers such as Boeing, Airbus, Lockheed Martin, etc., often deploy CPUs in their aircraft with different processing power typically sourced from specific vendors. In turn, aircraft manufacturers become increasingly dependent on vendors, limiting technological advancements. Furthermore, at times of economic crisis, trade restrictions, and geopolitical tensions with the CPU sourcing country, result in severe supply chain disruptions causing an economic decline. Further, to eliminate the cost of an economic crisis, the aircraft manufacturers & government of the US are increasingly adopting various initiatives such as the use of the Modular Open System Approach (MOSA) to eradicate supply chain dependencies.

A. The Global Aircraft Central Processing Unit (CPU) Market is projected to grow at a CAGR of around 4.46% during 2022-27.

A. The military aircraft segment is anticipated to emerge as an opportunity area for the leading players in the market during the forecast period.

A. The growing need for advanced military aircrafts such as 4.5 & 5th generation aircraft, and the evolving need for modular open system approach for aircraft are the key factors projected to drive the Global Aircraft Central Processing Unit (CPU) Market through 2027.

A. The ease in the travel restrictions globally has been slowly diminishing the effects of COVID-19 on the global aircraft manufacturing industry and subsequently easing the demand for the Global Aircraft Central Processing Unit (CPU) Market.