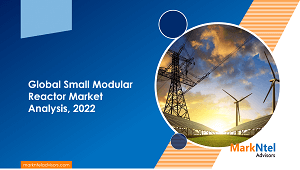 Small Modular Reactors (SMRs) are nuclear fission reactors used for nuclear energy generation. They are usually much smaller than traditional reactors and have an electrical power output of less than 300MW. Apart from their standard use for power generation, these reactors are also deployed for industrial applications such as desalination of water & process heating.

The small modular reactor industry is likely to expand swiftly in the coming years on the back of its cost-effectiveness and minimal construction time for these units. When compared with a renewable energy resource like wind or solar, the energy derived from these SMRs takes up a smaller area & generates only a small carbon footprint. Although the concept of Small Modular reactors is still undergoing rigorous research & development, it is anticipated to offer an opportunistic future for the leading players during the forecast period.

The Global Small Modular Reactor Market is projected to grow at a CAGR of around 14% during the forecast period, i.e., 2022-27. The growth of the market is likely to be driven primarily by the rapidly growing demand for SMRs in several applications for their flexible power generation capabilities.

With increasing levels of carbon emissions and the rising government focus across different countries on reducing dependency on fossil fuels, SMRs are witnessing an increasing demand for energy production using natural resources like wind & solar and, in turn, driving the global market.

Besides, growing awareness among several end-user industries about the benefits of SMRs like low to medium capital investment and small area consumption due to their compact size is another prominent aspect contributing to their surging need globally. SMRs offer higher safety, are an excellent alternative to fossil fuels, and generate a high energy rate owing to their development in controlled factory environments through the module fabrication process.

Furthermore, with the growing urbanization, power requirements are mounting rapidly and infusing the demand for clean electricity generation. Hence, governments of different countries are utilizing SMRs & exercising their benefits and, in turn, contributing to the global expansion of the Small Modular Reactor Market.