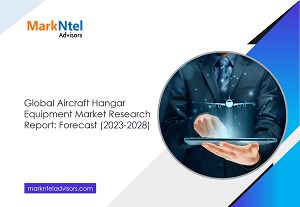 Aircraft hangars are buildings or structures intended to hold spacecraft or aircraft and ensure their safety from adverse weather conditions or heists. Such hangars are often built using metal, wood, or concrete. These are often custom-made based on the type of aircraft, the purpose of the hangar along with its location and costs.

The Global Aircraft Hangar Equipment Market is projected to grow at a CAGR of around 4.6% during the forecast period, i.e., 2023-28. The market for aircraft hangars has attained a swift growth pace with the sudden surge in the number of airbuses worldwide. With the increased number of aircraft, the need to ensure their safety and storage has also arisen, which in turn, has enabled the production of hangar equipment like aircraft multi-purpose platform stand, aircraft maintenance access stand, tripod-jacks, axle-jacks, axle-jack hose pressure kit, among others, ramp up in recent years. The utility of these hangars in terms of building aircraft, storing and also repairing, if and when needed, has furthered the market expansion. Moreover, with substantial funding from government authorities, the Aircraft Support Industries (ASI) is likely to enthrall in the coming years. For instance,

In addition, the rising number of air passengers in regions such as Europe, Asia-Pacific, the Middle East & Africa, etc., has been necessitating the requirement for new airports in order to meet the air traffic growth. According to the International Air Transport Association, the total traffic in March 2022 (measured in revenue passenger kilometers or RPKs) increased to 76.0% in comparison to March 2021. Moreover, due to the growing number of air passengers in the countries such as India, Vietnam, China, etc., the airport authorities in the respective countries are strengthening their air passenger handling capacities by expanding runways, developing new airports, enhancing aircraft fleet sizes, etc. As a result, the design and construction of hangars have been uplifted to cater to the growing capacities of the airport. For instance,

Inflatable aspect have gained traction in recent years predominantly due to their ability to get built in a shorter time compared to traditionally constructed aircraft barracks. Another factor backing such inclination demonstrated by the airport facilities is the lesser cost of installation associated with it. Moreover, the solidifying airport initiatives in developing countries further amplifies the demand for such advanced aircraft barracks. The ability to withstand adverse weather conditions alongside being sustainable has led to an increase in its installation. The integration of inflatable technology and technical textiles has paved the way for the utilization of inflatable hangars in all kinds of aircraft, from commercial, military, drones, and private jets to general aviation aircraft. For instance,