The Southeast Asia Oleochemicals Market is projected to grow at a CAGR of 3.38% during the forecast period, 2022-27, says MarkNtel Advisors in their recent research report. The growth factors such as the rising investment & growing establishment of local production units of cosmetic products, chemicals (lubricants, coatings, etc.), pharmaceutical industries, etc., have escalated the demand for oleochemicals. Additionally, increasing construction activities in the region have been a major player attributing to the growth of local paint manufacturing in Vietnam & Singapore.

Furthermore, the rising construction activity in the region has been one of the major factors in the expansion of local paint manufacturing in Vietnam and Singapore. As a consequence, the building contractors use oleochemicals as raw materials for paints & adhesives, which has led to an increase in the Southeast Asian oleochemicals market. Additionally, the rising demand for oleochemicals in Southeast Asian countries has prompted the manufacturers to expand their local production facilities.

The major industries in the region, including PT Unilever Indonesia, have recently invested a significant amount in the expansion of their oleochemical factory in the country. For instance, in 2021, Unilever Plc planned to spend nearly USD175.44 million in Indonesia. They aimed to expand its oleochemical factory named PT Unilever Indonesia. Hence, such expansions by the companies would considerably enhance the growth of the market during the forecast years.????? 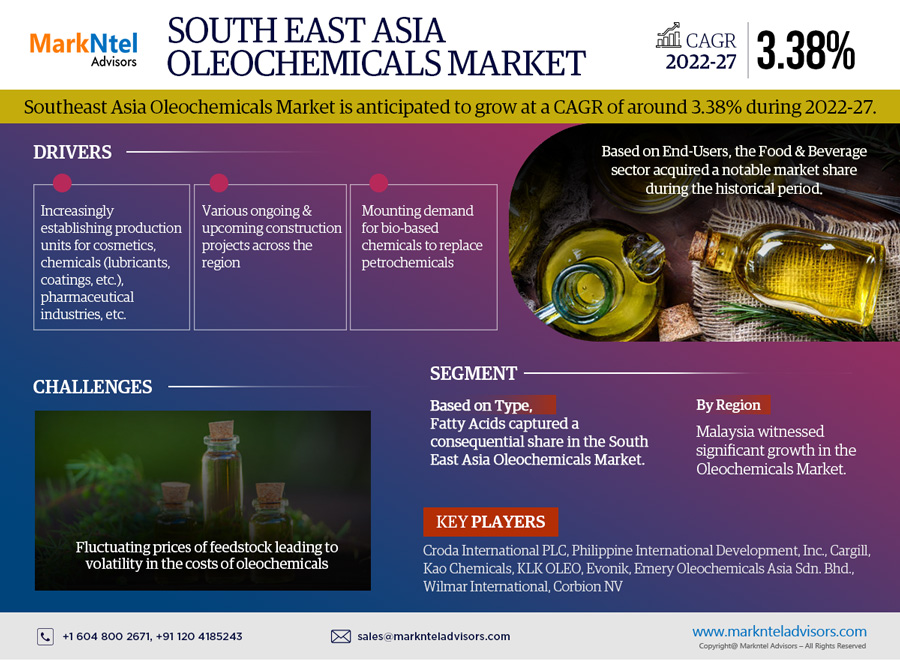 Based on the type, the market bifurcates into Fatty Acids, Fatty Acid Methyl Esters (Biodiesel), Fatty Alcohol, Isostearic & Stearic Acids, and Others (Fatty Amines, Glycerol). Of them all, Fatty Acids grabbed the highest share in the historical years, and the trend would continue to flourish in the coming years. The heavy production of palm oil in Southeast Asia has led to a significant contribution to fatty acids, thereby resulting in the growth of the oleochemicals.

Furthermore, countries such as Malaysia, Indonesia, and Thailand are the key producers of palm oil in the region. In addition, the growing demand for bio-based fatty acids from the end-user segment such as chemicals, personal care & cosmetics, and homecare resulted in escalating the growth of the Southeast Asia Oleochemicals market.

Malaysia to Witness Substantial Growth in the Coming Years

Geographically, the Malaysian oleochemicals market exhibited substantial growth during the historical period. The thriving food & beverage, chemicals, pharmaceutical, and oil & gas industries have been critical to the oleochemicals market growth. Furthermore, the development in the automotive industry has fueled a demand for paints, lubricants, and resin locally, which has led to the development of oleochemical production in the country. Additionally, Malaysia is one of the world's leading suppliers of palm oil to Europe, Asia, and South Asia.

As the country has been capable of producing sufficient pharmaceutical products not only for its domestic demand but also for exports, the expansion in the manufacturing capacity of the pharmaceutical industry has also increased the demand for oleochemicals. For instance, the Malaysian Ministry of International Trade and Industry, in 2022, announced an increase of around 24% in pharmaceutical exports amounting to about USD584 million in 2021 compared to 2020. Therefore, positively influencing the market growth.