According to MarkNtel Advisors, the Middle East & Africa Drones Market is projected to grow at around 35.12% CAGR during 2021-26. The market is driven primarily by the rapidly increasing investments by various countries in bringing innovations in drone technology, owing to the mounting awareness about the triggering business outlook. Besides, the strategic investments by several companies in start-ups to address the surging demand for drones like air taxis, logistics, survey & surveillance, monitoring, mapping, etc., also drive the market. 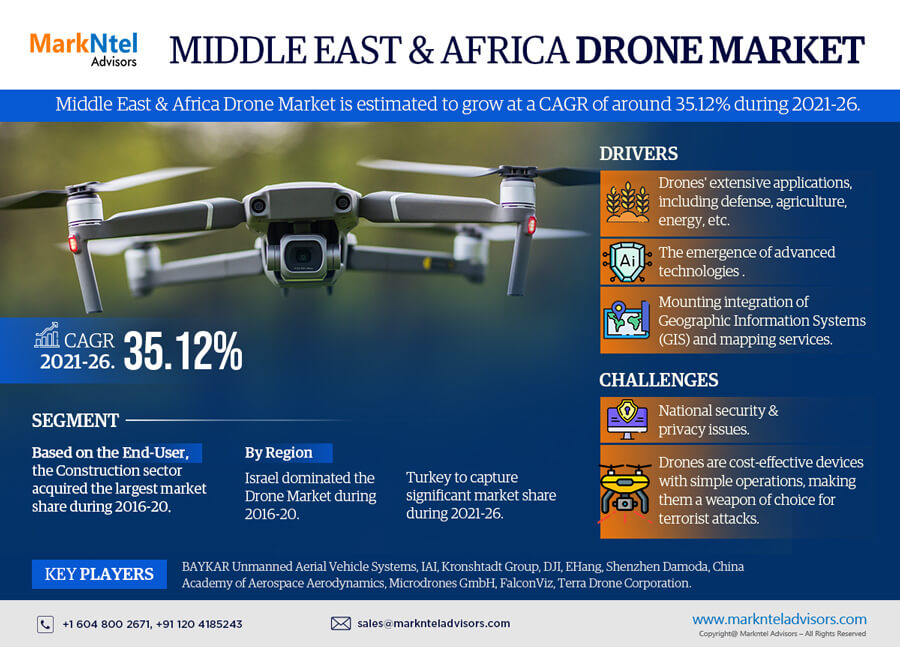 The fixed wings of drones are similar to an airplane, with long-range flying capabilities of a minimum of 16 hours when powered by gas engines, resulting in their extensive range of applications in different verticals. As a result, these drones efficiently hover for an extended period and comply with operations like monitoring targets, mapping larger areas, etc. Hence, based on these aspects, the demand for Fixed-Wing Drones is likely to increase considerably in the coming years. On the other front, the market dominance of Rotary-Wing Drones in applications like mapping & surveying, photography & videography, inspections, & surveillance owes principally to their excellent VTOL capabilities.

With Rapid R&D activities in Drone Technology, Israel to Dominate the Market Through 2026

Besides, the country is also a hub of prominent IT companies like Microsoft & Google that conduct several research & developments in drone technology. Hence, with these aspects, Israel is anticipated to dominate the drone market in the coming years, states MarkNtel Advisors in their research report, "Middle East & Africa Drones Market Analysis, 2021."