The Global Cognitive Electronic Warfare Market is anticipated to grow at a CAGR of around 20.42% during the forecast period, 2022-27, says MarkNtel Advisors in their recent research report. The global market experienced rapid growth in recent years, owing to the various technological advancements in Electronic Warfare Systems like Artificial Intelligence (AI), machine learning, etc., that enhanced functioning & situational awareness of the military forces. Electronic warfare systems are constantly becoming more advanced as technology advances. Its capabilities are being developed across major economies around the world in order to ensure next-generation defense mechanisms as well as minimize collateral damage by simultaneously attacking enemy targets with utmost precision.

Moreover, the rising geopolitical tensions & border disputes among several countries have forced the nations to modernize their defense sector with technologically advanced electronic warfare systems that enable accurate tracking & targeting of the enemy military system. Hence, reducing the risk to human life & executing a successful military operation. Besides, various leading countries like the US, China, etc., have focused on modernizing their defense systems by investing in the research & development of their defense mechanisms like electronic warfare. For instance, the US Department of Defense allocated USD4 billion & USD841 million in FY 2020 & FY 2021, respectively, for the research & development of Artificial Intelligence (AI) technology used in various military systems such as Electronic Warfare, Unmanned Aerial Vehicle (UAV), the Joint Light Tactical Vehicle, etc.

Additionally, the increasing interest in manipulating & disabling enemy radars through radar jamming has opened up the door for adaptive electronic warfare systems to become one of the most accepted technologies in use, further states the research report, "Global Cognitive Electronic Warfare Market, 2022-2027." 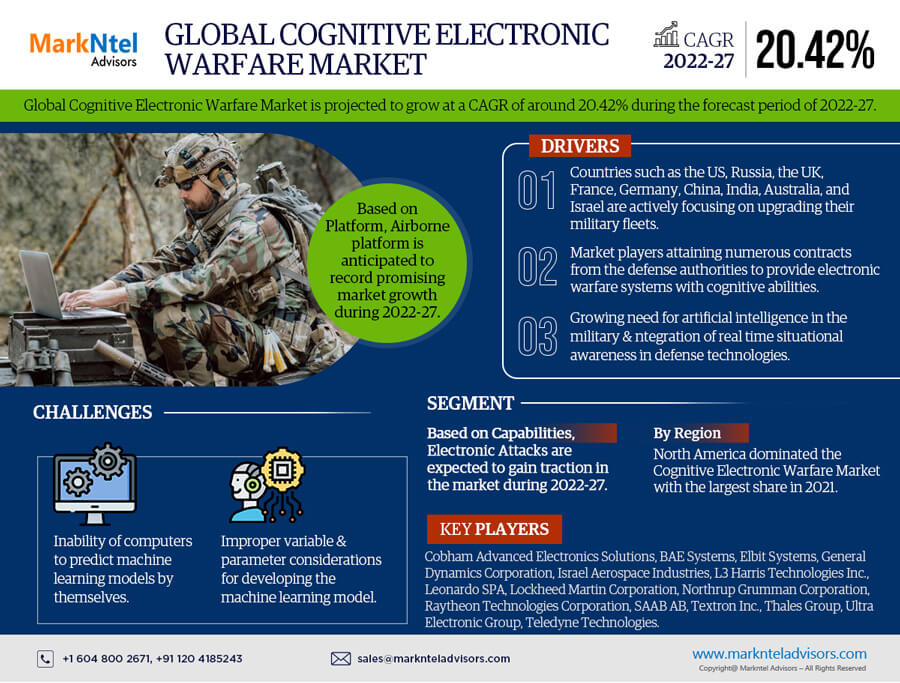 Based on the platform type, the market bifurcates into Navy, Airborne, land, and Space. Among them, the Airborne Platform is expected to hold a significant market share during the forecast period, owing to the increasing government's focus on defense modernization & investment in the latest technologies. The latest technologies include Artificial Intelligence (AI), machine learning, etc., in fighter aircraft, Unmanned Aerial Vehicles (UAVs), etc., to protect their borders & counter the attacks of enemy countries. Moreover, the electronic warfare system provides real-time data that enable the forces to take prior actions to protect their geographical borders.

The cognitive electronic warfare systems are also used by the airborne platforms to suppress the enemy air defenses in order to provide support to the strike group for enemy airspace penetration. With the growing reliance on the radar systems for situational awareness by the militaries the demand to block or jam the radar detection systems has also grown extensively leading to assist the demand for cognitive electronic warfare systems.

Therefore, various countries like the US, China, Russia, etc., are investing in the advancement of the airborne warfare system. For instance, in 2021, the US Department of Defense announced the investment of USD874 million for FY2021, in order to develop and modernize their defense systems based on the newest technology, such as artificial intelligence.

North America, Being the Most Technologically Advanced Region to Lead the Market

Geographically, the North American region held the major market share in the Global Cognitive Electronic Warfare Systems market. One of the largest defense budgets in countries such as the US & Canada and a growing focus on the integration of effective electronic warfare systems in different naval, air, and land platforms to counter eventual threats have significantly improved the growth of cognitive electronic warfare systems in North American region. Further, the US being home to a large number of OEM manufacturers for cognitive electronic warfare systems has played a crucial role in the increase in the demand for the respective systems. Hence, these factors would help the region to lead the market growth in the forecasted period as well, reveals MarkNtel Advisors in their research report, " Global Cognitive Electronic Warfare Market, 2022-2027."