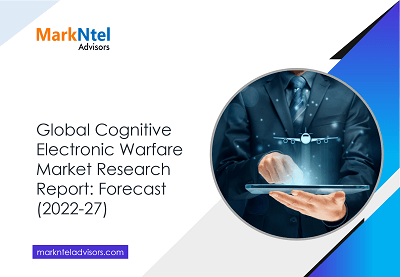 Cognitive Electronic Warfare uses Artificial Intelligence (AI) & Machine Learning algorithms to sense, protect, and communicate through signals such as radio frequency & infrared or radar frequency to detect operational security issues & provides hypotheses to rectify them. The cognitive electronic warfare systems, with their wide application in the military combat scenarios, have extensively grown their demand in militaries across the world. With network-centric warfare taking center stage in the military operations & the need to jam & counter-jam the systems the demand for cognitive electronic warfare systems has grown in the global market during 2017-2021.

The Global Cognitive Electronic Warfare Market is projected to record more than USD1 billion in terms of size, with around 20.42% CAGR during the forecast period, i.e., 2022-27. Cognitive Electronic Warfare (EW) systems use machine learning algorithms to detect new or unknown threats. These systems can understand different patterns based on high-quality signal data. Several militaries & companies from countries like the US, Russia, the UK, France, China, and Australia are actively striving toward developing advanced cognitive EW systems for future battlefield platforms. The Global Cognitive Electronic Warfare Market is still at a nascent stage. China, the US, and Russia are the major countries where cognitive electronic warfare systems have started gaining traction

Next-generation jammers are technologically advanced jammers that allow aircraft to hide from smart radars. They utilize cognitive algorithms to autonomously detect signals & respond quickly to keep the aircraft safe. The advanced airborne attack capability provided by the next generation jammer allows the aircraft to enter the enemy’s airspace since it jams the radars within certain frequencies. These jammers are being procured actively by defense organizations globally & fitted on airborne platforms. The US Navy, Chinese Navy & Air force, and Russian Defense Forces are the prime users of next-generation jamming solutions. In 2021, the US navy planned to spend around USD180 million on procuring next-generation jammers. The plan was improvised further in 2022, with the total investment raising to USD245 million.

Here, the Electronic Attack segment is expected to gain traction during the forecast period 2022-2027, witnessed by the interminable cyberattacks by the Republic of China & Russia in territories such as the US, Taiwan, and India. Further, the increasing cyber threats from China & Russia have contributed to an increase in the demand for investments in R&D activities in Electronic Attack, Cognitive Electronic Warfare Market globally. For instance:

Hence, significant investments in airborne warfare are being witnessed globally. For instance, in June 2021, the US Department of Defense (DoD) leaders planned to invest USD874 million in 2022 in AI-related technologies to boost deterrence against potential adversaries like China & Russia. However, the growth of land-based platforms is expected to outperform other platforms in the coming years.

Geographically, the market expands across:

Moreover, the proliferation of RF machine learning systems programs, IDECM programs, etc., by the US defense forces is expected to generate significant demand for cognitive electronic warfare systems in the near future. However, with the extensive presence of leading market players & the intense competition among them, North America is the most technologically advanced region. The companies across the region are securing contracts from end-users like defense forces & government agencies for developing technologically advanced electronic warfare systems to be installed on various platforms.

Furthermore, the US Department of Defense budget focused on AI research & development for FY 2020 & FY 2021 was USD4 billion & USD841 million, respectively. In addition, China is another important country that is significantly investing in AI-based R&D. The EW strategy is a government initiative that focuses on suppressing, degrading, and disrupting the enemy’s electronic equipment. Further, the massive amount of data generated by sensors & communication networks has given rise to artificial intelligence to handle it.

Computers cannot predict machine learning models by themselves, which acts as a limitation & infuses the need for humans to understand the output from a machine learning model since it helps analyze crucial patterns & predictions. Defense authorities are increasingly using machine learning models for storing & analyzing high-quality data gathered from sensor & communication networks. The systems used by the military are not technologically advanced and are hence, unable to store large amounts of data and require frequent re-programming. Machine learning-based electronic warfare systems can overcome this challenge. However, these systems have some drawbacks associated with improper variable & parameter considerations for developing the machine learning model.

Since many countries worldwide are witnessing an increasing number of border threats, foreign interventions, & terrorism acts, governments are massively investing in modernizing their defense sectors and strengthening the domestic defense, communication systems, border security, etc. It includes setting up dedicated infrastructure & facilities to integrate such a disruptive warfare ecosystem. In the coming years, government spending on such solutions would skyrocket to mitigate the immediate risks. For instance:

In June 2021, the Indonesian government announced a 3-year plan to spend USD 125 billion to upgrade & modernize its military sector.

A. The Global Cognitive Electronic Warfare Market is expecting around 20.42% CAGR during 2022-27.

A. The Airborne Cognitive Electronic Warfare segment is anticipated to emerge as an opportunity area for the leading players in the market during the forecast period.

A. Increasing transnational & regional instabilities is one of the prime factors augmenting the market growth.

A. Europe would continue to grow at the highest CAGR during 2022-27, thereby presenting immense opportunities to market players of the Global Cognitive Electronic Warfare Market.