The Global Buy Now Pay Later Market is projected to grow at a CAGR of 23.58% during the forecast period of 2022-27, says MarkNtel Advisors in their recent research report. The increasing adoption of businesses & merchants towards the integration of buy now pay later payment alternatives on websites & retail stores has widely contributed to the revenue growth of the market. Furthermore, the lower availability of disposable income among the millennials & soaring inclination of consumers towards the purchases of discretionary products, including electronics, automotive, etc., have led to the adoption of buy now pay later service globally.

Besides, a major reason for the availability of e-credit from digital financial services is the ease with which it is available in comparison to credit lines within no time. Other advantages include lower interest rates, easy payback arrangements, and the availability of reward points that can be applied to e-credit when needed.

Moreover, the growing initiatives by the financial service providers such as Visa, MasterCard, and American Express, among others, to ease the availability of e-credit to the customers by integrating the buy now pay later (BNPL) services are anticipated to boost the revenue growth of buy now pay later service providers in the forthcoming years, further states the research report, "Global Buy Now Pay Later Market Analysis, 2022-2027." 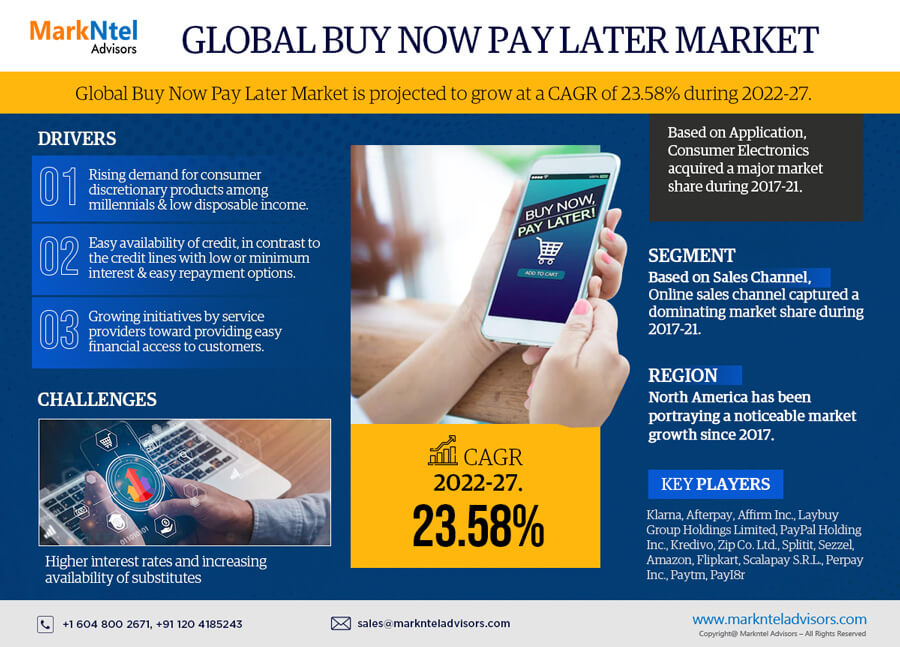 Based on the sales channel, the market is divided into Online & Point of Sales. Of them, the rising penetration of internet subscribers & an increase in sedentary lifestyles has soared the global demand for doorstep delivery platforms for a range of products such as grocery, clothing, electronics, food deliveries, etc. However, merchants sometimes had trouble generating sales as consumers' lower disposable incomes & less attractive discounts limited their sales. This encouraged merchants and retailers such as Klarna, Stripe, and Swappa, among others, to expand their payment alternatives by integrating buy now pay later services to attract millions of customers.

In addition, the merchants are increasingly investing in advertisements for their brands, including attractive offerings such as flexible payment alternatives & attractive discounts & rewards, which have notably contributed to the demand for BNPL services on online platforms.

Geographically, North America is anticipated to dominate the Global Buy Now Pay Later market during 2022-2027. High awareness among the individuals of the region about the range of financial offerings, owing to their deeper engagement in financial markets, has significantly increased the penetration of buy now pay later services in the region. Additionally, the BNPL service market in the region has a competitive environment, with many global financial service providers offering attractive portfolio offerings. Moreover, the gripping engagement of the individuals in the region towards gaming & entertainment activities has augmented the demand for gadgets, such as gaming consoles, play stations, etc., on the e-commerce platforms such as Amazon, eBay, etc. Due to this, there has been an increasing trend of forming partnerships between the buy now pay later players & entertainment service providers across the region to offer consumers attractive discounts, rewards & subscriptions to their loyalty programs. Hence, these developments are anticipated to provide lucrative growth opportunities for the North American Buy Now Pay Later market in the forthcoming years, reveals MarkNtel Advisors in their research report, " Global Buy Now Pay Later Market Analysis, 2022-2027."