The Global Anti-Drone Market is estimated to grow at a CAGR of around 29.91% during the forecast period of 2022-27, says MarkNtel Advisors in their recent research report. The demand for Anti-Drones has risen considerably across the globe due to the deepening concern of the countries regarding the increasing incidences of security breaches by illicit drones. Further, anti-drone technology is used to detect, track, identify & neutralize potential unwanted unmanned aerial vehicles. In addition, the rising usage of drones in public venues & military bases stimulated the threat of terrorist attacks in government & public places.

Consequently, the growing concern regarding the threat of security breaches has led countries to enhance the usage of countermeasure solutions. This has increased the deployment of anti-drone systems in public & commercial establishments, thereby inclining the market of anti-drone systems across the globe. Furthermore, the growing advancements in the anti-drone technology & rising government investment by various countries, including the US, Canada, India, China, Russia, Israel, etc., to enhance their military capabilities as well as restrict the terrorist attacks have proliferated the demand for anti-drone systems across the globe.

Moreover, the major factor driving the demand for counter-drone technology is due to the large-scale deployment of drones for surveillance monitoring & other applications. Consequently, this had increased the threat of terrorist attacks, which led countries to adopt counter-drone solutions to reduce security breaches, thereby proliferating the demand for anti-drone systems during the forecast period. 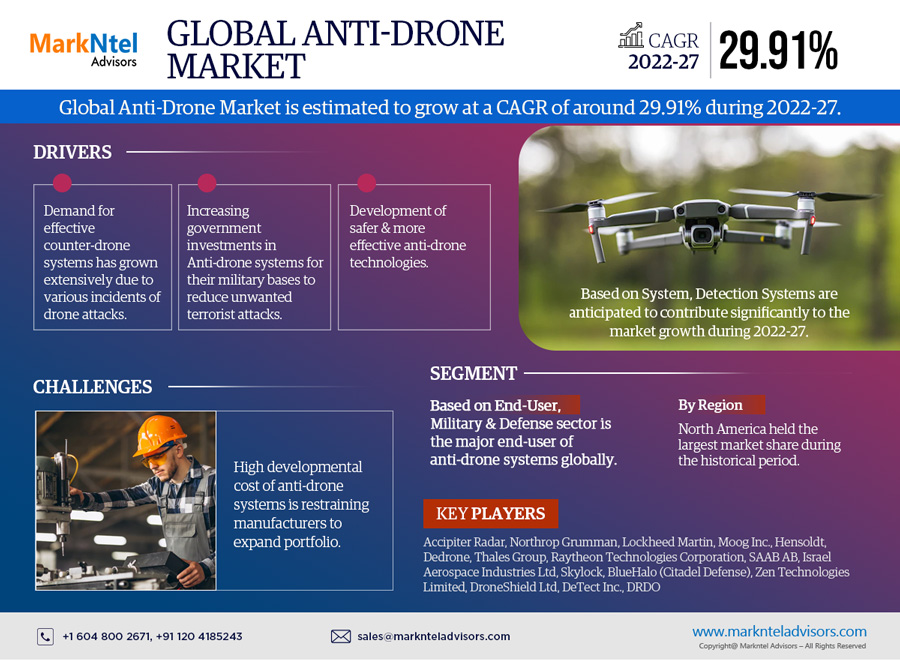 Based on the end-user, the defense sector dominated the Global Anti-Drone Market in the historical period due to the growing requirement for the deployment of anti-drone systems on military bases. Countries like the US, Canada, France, Russia, Germany, Japan, China, UAE, etc., are focused on strengthening their military capabilities thereby equipping their military bases with advanced anti-drone systems in order to monitor illicit drones in their region.

Moreover, the increasing defense expenditure by the government had led military authorities to deploy advanced anti-drone systems in order to address the rising need for security in the military bases. Therefore, these developments in the defense sector have led companies to develop and provide more advanced counter-drone systems for the military and the defense sector and thereby inclining the market for anti-drone in the near future.

North America Held a Significant Share in the Anti-Drone Market

Geographically, North America witnessed exponential growth in the Anti-Drone market during the historical period. The foremost reason for the progress of the Anti-Drone market is the existence of key market players like Lockheed Martin, Accipiter Radar, Moog Inc., etc. These anti-drone manufacturing companies are developing & providing counter-drone solutions to various countries across the globe. These market players emphasized improving the performance, accuracy, and quality of their anti-drone systems. Consequently, owing to the presence of a group of leading companies in North America, it is expected to have more innovations in the segment, which would surge the Global Anti-Drone market in near future.

In addition, the rising government expenditure on the expansion of the defense & military infrastructure had enhanced the adoption of anti-drone systems on military bases. In 2020, the US Department of Defense invested significantly in DroneSheild counter-UAV command & control system to provide real-time alerting & reporting information. Thus, the increasing government investment in the development of counter-drone systems would boost the anti-drone market in the foreseen years, reveals MarkNtel Advisors in their recent research report, "Global Anti-Drone Market Analysis, 2022-27."