The concept of swarm drones is integrating & flying multiple UAVs with various sensors, munitions, & communication equipment onboard operated from a single station. Equipped with cutting-edge technology, these UAVs can identify targets in real time using AI-driven algorithms. As drone warfare is being utilized extensively & effectively by many countries worldwide, swarm drones can promise to provide an edge to militaries in fighting future security challenges by acting as a force multiplier in different defense operations.

The Global Swarm Drones Market is expected to grow at a whopping 55% CAGR during the forecast period, i.e., 2022-27. Most of the market expansion would be driven by massive investments & advancements in drone technology, coupled with the mounting adoption of UAVs (Unmanned Aerial Vehicles) for surveillance operations in the military & defense sector due to rising security breaches at military bases, government establishments, & several public places across different countries worldwide.

As a result, it has generated the need for militaries to procure & implement state-of-the-art munitions, i.e., propelling the demand for swarm drones. Several initiatives associated with swarm drones by different countries have surfaced in recent years, including the Russian Lightning, the French Icarus project, the UAE/South African N-Raven, the Spanish RAPAZ, and the UK’s Blue Bear swarm. In addition, the US Marine Corps is moving with kamikaze drone swarms, whereas there are separate swarm drone programs of the US Army, Air Force, Navy, & DARPA.

Militaries like the US, Russia, the UK, Netherlands, Denmark, France, and Norway, among others, have well-comprehended the potential of swam drones, and thus, are investing massively in this technology for various defense applications like surveying, surveillance, mapping, monitoring, and aerial photography.

Furthermore, the integration of advanced technologies like AI into drone technology has made swarm drones more effective in surveillance, defending against incoming projectiles, and identifying & attacking high-value targets, among others. Hence, the evolution in drone technology is leading to the rising popularity & use of drone swarms and, in turn, accelerating the overall growth of the global swarm drone market.

Based on Movement Type:

Of them all, fixed-wing hold a sizeable share in the Global Swarm Drones Market, owing to their longer flight duration than rotary-motor drones. These UAVs have an easy flight mechanism with just one rigid wing that offers them a vertical lift and a gas-powered engine that provides them with a forward thrust. They can map larger areas, cover longer distances, fly at high altitudes, & carry massive payloads. Due to these benefits, fixed-wing swarm drones are the most preferred choice of various military forces worldwide for performing surveillance operations on long-range missions.

However, with the advent of tactical military operations & short-range flights, rotary blade swarm drones have gained ground globally for reconnaissance, surveillance, & intelligence missions. Their growing popularity is backed by benefits like better aircraft handling, increased maneuverability, and enhanced operational efficiency & reduced inspection time owing to the ability to take multiple payloads per flight. As a result, the increasing production of unmanned rotorcrafts & quadcopters worldwide is fueling the swarm drone market for rotary-blade UAVs.

Here, remote-operated swarm drones hold a prominent market share as they have been in the market for a long time with lesser operational costs than autonomous or semi-autonomous swarm drones. These drones are operated at lower altitudes by operators positioned at remote locations that collect information through remote sensing. Their use has been extensive in many countries worldwide for military or commercial purposes. However, due to their small area coverage that restricts operators from being in close proximity, the demand for remote-operated swarm drones is slowly being outpaced by semi-autonomous & autonomous drones.

Autonomous swarm drones are steadily gaining pace in the global market owing to their long-range performance efficiency, high payload capacity, enhanced propulsion power, and automatic operations without human involvement. Due to these advantages, several countries worldwide are actively working on bringing innovations & developments to these drones in order to provide enhanced tactical & strategic services to military operations and, consequently, aiding in the overall market expansion.

Among all regions globally, North America is projected to dominate the Swarm Drones Market during 2022-27, mainly due to the extensive utilization of these vehicles in various military & defense operations. The US is the world leader in swarm drone technology, with several ongoing initiatives for swarm UAVs & munition.

Moreover, the US Navy & Marine Corps’ LOCUST (Low-Cost UAV Swarming Technology) is another ongoing development in swarm drone technology in the country. The technology involves firing small UAVs from a tube-based launcher to execute varied missions.

In addition, the US Army is conducting rigorous R&D on deploying drone swarms & RL (Reinforcement Learning)-based AI algorithms combined in tactical battlefield areas in a multi-domain battle situation, in which swarms will be connected & coordinated in an agile manner with diverse mobile platforms in order to win over enemy capabilities.

AI-driven UAVs enable the swarm of drones to identify & attack the enemy defenses autonomously while allowing them to search for enemy submarines in the ocean through infrared sensors. Swarm drones can efficiently carry out search & rescue missions over enormous territories using a thermographic camera that detects the infrared radiation emitted by submarines on the surface, and the US is largely utilizing these advanced drone swarms. Hence, these trends & initiatives are set to create new directions for the North America Swarm Drones Market to witness significant growth opportunities in the coming years.

A rapid rise in territorial issues globally is leading to massive defense expenditure by various countries to strengthen their military forces. Extensive procurement of UAVs that can effectively perform real-time surveillance & intelligence operations is being observed across the US, the US, Israel, & China, among others. As a result, using multiple drones in coordination with each other & in real-time is helping militaries enhance border patrolling to improve situation awareness and prepare for any future warfare situations & counter-terrorism activities. Hence, the mounting adoption of UAVs by defense forces worldwide is set to drive the Global Swarm Drone Market during 2022-27.

UAVs are well-equipped with advanced flight management technology, high-end propulsion & avionics systems, modern sensors, & payloads, which is why these sophisticated systems incur high manufacturing & operational costs. This aspect may act as a major restraint for the Global Swarm Drones Market growth during 2022-27.

On the other hand, the security of UAVs during military operations is another significant growth challenge for the market. Since UAVs operate remotely or autonomously, there are risks associated with cyberattacks on their flight control systems wherein hackers can take control of their operations and, in turn, create a massive threat to national security.

A. The Global Swarm Drones Market is expected to record around 55% CAGR during 2022-27.

A. The burgeoning adoption of UAVs by militaries worldwide owing to growing border disputes among different countries is the major factor expected to drive the Global Swarm Drone Market during 2022-27. On the other hand, the high initial costs of drones and security concerns over their use in defense forces are significant growth challenges for the market.

A. Rotary-blade drones are likely to emerge as an area of remunerative prospects for the key companies in the Global Swarm Drones Market during 2022-27.

A. North America would continue creating new directions for the leading players in the Swarm Drones Market to generate significant profits in the years ahead. 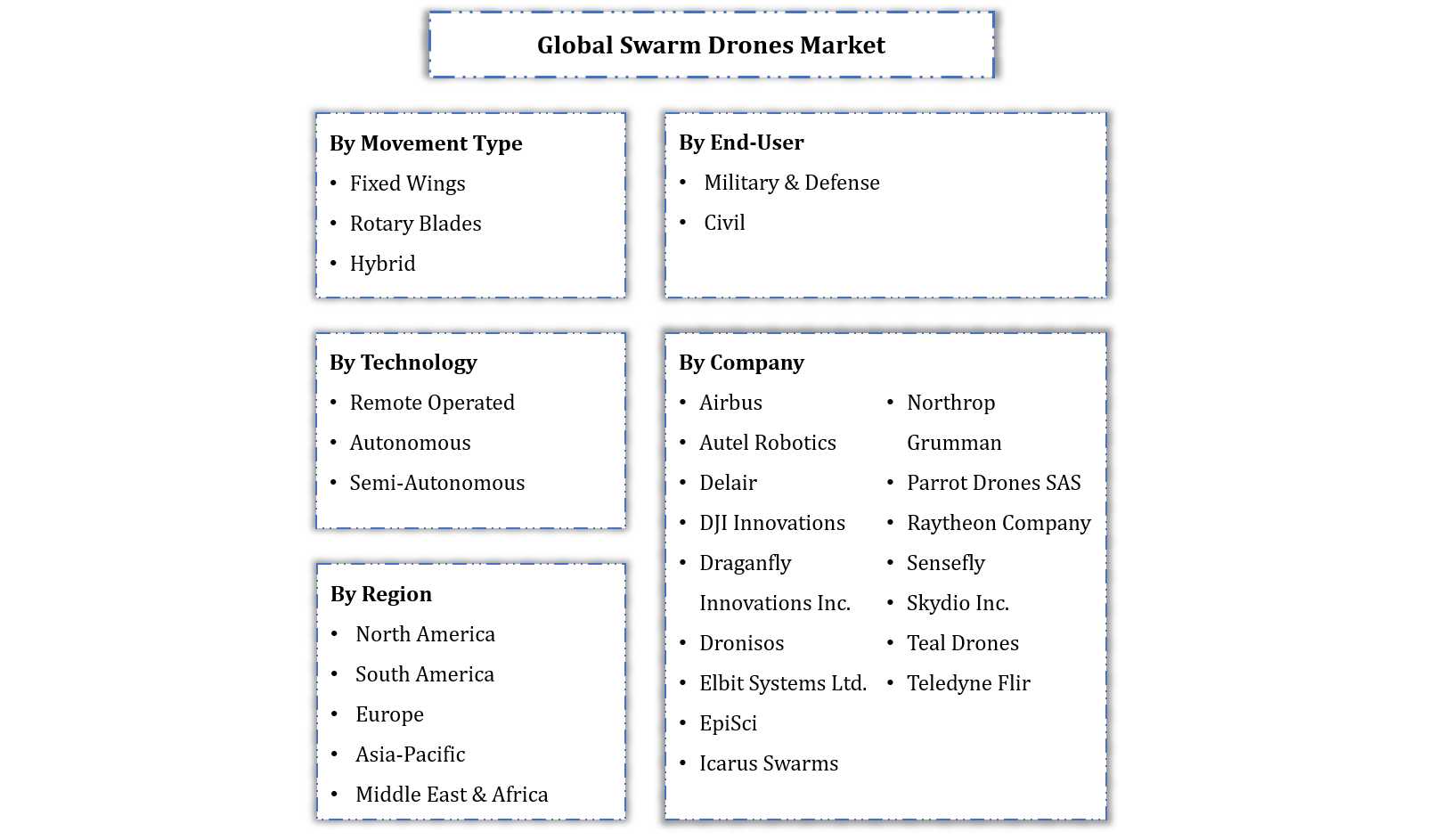