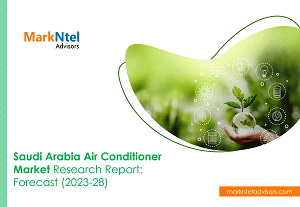 Air conditioners are machines that remove warm air from a defined area and replace it with cooler air through a refrigeration cycle.

The Saudi Arabia Air Conditioner Market is projected to grow at a CAGR of around 5.0% during the forecast period, i.e., 2023-28. The growing commercialization, along with the diversification of the economy due to extensive development in residential, commercial, hospitality, and industrial sectors, is one of the few factors expected to drive the Saudi Arabia Air Conditioner market growth through 2028. In addition, this drift towards infrastructural development has attracted substantial investment from the government and the private market players, leading to more installation of air conditioners in the coming years. For instance, in 2018, The ‘wind-free’ wall-mounted air-conditioner, the first of its kind, was launched at the HVACR Expo to be constructed in Jeddah. Besides, the rising greenfield investments in the country would positively impact the demand for air conditioners in the coming years.

Moreover, the active participation of the government in allocating funds for an affordable housing facility has multiplied the number of residential units, thus resulting in maximized sales of AC in the nation. However, as an aftermath of the pandemic, the overall economic growth of Saudi Arabia got hampered as the authorities banned international pilgrims, which subsequently restricted the air conditioner industry expansion.

On the contrary, the initiatives like Saudi Vision 2030, aiming to reinvigorate the dipping economy, might further boost the kingdom's economy, swiftly hinting at more infrastructural advancements across Saudi Arabia in the coming years. Such robust improvements, paired with mounting sustainability concerns, particularly in the commercial and residential sectors, might encourage the need for more energy-efficient and smart AC for air conditioners between 2023 and 28.

Key Driver: The Integration of Smart and Energy-Efficient Technology

Many clients are shifting to smart and energy-efficient technology in order to minimize energy consumption and enhance sustainability. Due to its improved monitoring and smart thermostats, the inbuilt system has gained traction over conventional systems, as the modern ones facilitate better temperature variability and cleaner air. Also, users can monitor these systems' performance in real-time using a mobile app. Backed by these benefits, the inclination for energy-efficient and advanced air conditioners has accelerated in the past few years and is likely to propel the industry forward in the forecast period.

The rapidly growing focus of the government on religious tourism has attracted a large influx of funds for numerous related projects. As a result, there are now ongoing projects like the $26.6 billion Grand Mosque expansion in Mecca and the $16.5 billion Haramein high-speed rail link between Mecca and Medina. With 25 million people projected to visit the holy sites annually by 2025, these enhancements are meant to increase religious tourism in the nation. Thus, religious tourism is likely to emerge as an opportunistic area for the leading players impacting the AC installment in the coming years.

Among its peers, the Split Air Conditioner captured the highest share in the Air Conditioner Market in Saudi Arabia in the historical years. The maximum claim by the category is attributed to the establishment of various residential buildings, small corporate offices, and retail shops under the Saudi Vision 2030. These buildings called for the installments of Split AC in significant numbers. Besides, several companies such as Samsung and Trane are discontinuing the production of the window air conditioner segment, instigating the demand for split ac for residential purposes. For instance, In Jan 2019, Airedale entered into a contract of USD 1.26 million to supply air-conditioning systems for Saudi Arabia’s under-construction Riyadh Metro. The company will deliver the EasiCool line units for the 176 Km long Riyadh Metro having 85 stations.

Based on End User,

In 2022, the industry's residential, commercial & retail sectors acquired the majority market share. In addition, the government's extensive initiatives, including King Abdullah Economic City and Jazan Economic City, and numerous housing projects to upgrade the country's infrastructure have recently augmented the demand for air conditioners. However, it is predicted that this demand shall scale up the price of air conditioners in the nation's hospitality sector. Further, the authority's initiatives to relax travel visa restrictions by facilitating the issuance of e-visas and visas on arrival for visitors from 49 countries would drive an increase in demand for new hotels, particularly medium-budget hotels, over the upcoming years.

Regulatory Landscape in the Global Market

The following details must also be on the new energy label of the air conditioner:

A. The Saudi Arabia Air Conditioner Market is projected to grow at a CAGR of around 5.0% during 2023-28.

A. The integration of smart and energy-efficient technology is likely to drive the air conditioner industry during 2023-28.

A. Split Air Conditioner is anticipated to emerge as an area of remunerative opportunities for the leading players in the Saudi Arabia Air Conditioner Market during the forecast period.

A. Globally, Central Region would provide lucrative prospects for the Saudi Arabia Air Conditioner Market in the years ahead.

A. Ever-expanding religious tourism in the kingdom is emerging as the growth opportunity driving the Saudi Arabia Air Conditioner Market through 2028.