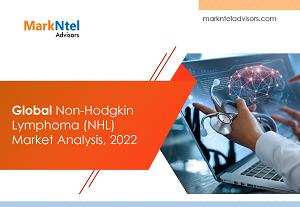 Non-Hodgkin Lymphoma (NHL) is cancer that usually starts in the body's lymphatic system, wherein lymphocytes grow abnormally & develop tumors throughout the body. Although NHL mainly occurs in adults, children can get it too. The disease can be lethal if not treated effectively and, in turn, result in a shorter life span for patients. However, various clinical trials conducted by the leading biotechnological & pharmaceutical companies worldwide for new drug developments, particularly for the relapsed & refractory cases, have aided in improving the prognosis for people with Non-Hodgkin Lymphoma.

The Global Non-Hodgkin Lymphoma (NHL) Market is expected to grow at around 7.6% CAGR during the forecast period, i.e., 2022-27. The growth of the market would be driven primarily by the rising prevalence of B-cell lymphoma worldwide and mounting side effects of chemotherapy treatment, which, in turn, is leading to substantial R&D investments in procuring novel drugs to cure NHL. Besides, rapid drug approvals for B-cell lymphoma treatment in both developed & emerging countries and the impressive pipeline of targeted therapies, coupled with the label expansion of currently available therapies for treating various subtypes of NHL, are also driving the market.

Non-Hodgkin Lymphoma is usually more observed across countries with high living standards. BCLs (B-cell lymphomas) account for the majority of NHL cases, whereas FL (Follicular lymphoma) & DLBCL (Diffuse Large B-Cell Lymphoma) are the most common indolent & aggressive subtypes of NHL, respectively. Patients with NHL often require aggressive & accurate modes of treatment due to no show of symptoms, which results in the diagnosis of the disease in advanced stages.

There are different treatment options for NHL, which depend entirely on its subtype & stage. They may include chemotherapy, stem cell transplant, immunotherapy (Monoclonal Antibodies, Antibody-drug Conjugates, Immunomodulatory Drugs, & CAR T-cell therapy), targeted therapies, radiation therapy, & surgery. There are high unmet patient needs for the treatment of Non-Hodgkin Lymphoma, i.e., leading to the launch of promising therapeutic drugs, which will further augment the growth of the Global Non-Hodgkin Lymphoma (NHL) Market through 2027. 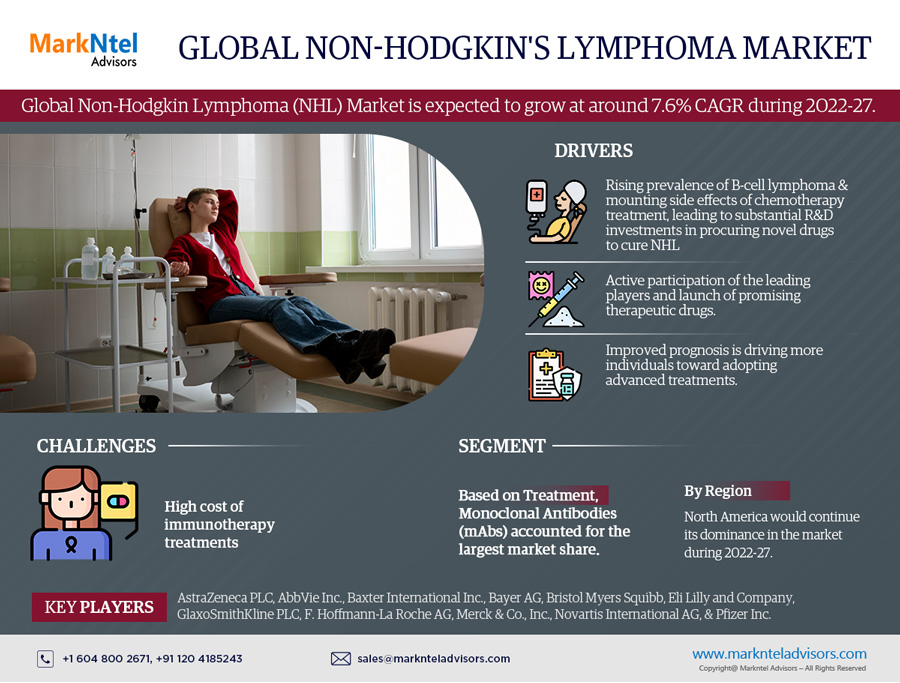 Among all treatments, monoclonal antibodies (mAbs) of immunotherapy accounted for the largest share in the Global Non-Hodgkin Lymphoma (NHL) Market owing to their outstanding mechanism of action. Highly specific mAbs are directed at lymphoma cells and used as the first-line treatment as well as for recurrence of certain forms of NHL. Monoclonal antibodies are highly versatile, more effective, & show relatively fewer side effects than other therapeutics, which makes them suitable for targeting different sub-categories of NHL. As a result, the leading pharma companies are increasing the indication of already available mAbs for other cancer categories in order to expand their global presence.

On the other hand, CAR T-cell therapy is emerging as the most promising treatment for many subtypes of Non-Hodgkin Lymphoma, owing to its high efficiency in treating NHL patients. However, researchers are working toward further improving its efficacy & speeding up the response rate.

Of all regions globally, North America would continue its dominance in the Non-Hodgkin Lymphoma (NHL) Market during 2022-27, owing primarily to the well-established healthcare facilities, early adoption of advanced healthcare technologies, and the rising incidence of B-cell NHL. It, in turn, is leading to the burgeoning adoption of expensive therapeutics for the NHL treatment across the region and fueling the overall market growth.

On the other hand, Asia-Pacific is expected to register rapid market growth over the forecast years, owing to the rising prevalence of several forms of NHL and massive investments in developing robust healthcare infrastructure to cater to patient requirements. Several biopharma companies across the region are investing in developing novel drug therapies to meet the growing demand for NHL treatment. In addition, with the mounting consumer awareness about the disease and the increasing regulatory approvals for expensive therapeutics like KYMRIAH (tisagenlecleucel) in Japan, the overall growth of the Non-Hodgkin Lymphoma (NHL) Market would notably expand across Asia-Pacific through 2027.

The growing patient pool for blood cancers, especially B-cell lymphomas, i.e., instigating the need for better clinical & therapeutic patient outcomes in refractory or relapsed cases, is the prime aspect projected to drive the Global Non-Hodgkin Lymphoma (NHL) Market during 2022-27. Moreover, rigorous R&D activities in developing efficient therapeutics for Non-Hodgkin Lymphoma have led to an overall improved prognosis. It, in turn, is driving more individuals toward adopting advanced treatments, which further projects remunerative prospects for the global market over the forecast years.

The high cost of treatments, like immunotherapy, which restricts a large number of patients from opting for the required treatments due to the unavailability of appropriate payment options, is the most prominent growth restraint for the Global Non-Hodgkin Lymphoma (NHL) Market during 2022-27.

A. The Global Non-Hodgkin Lymphoma (NHL) Market is projected to witness around 7.6% CAGR during 2022-27.

A. The mounting global prevalence of blood cancers, especially B-cell lymphomas, and rapid approvals of novel drugs for their treatment are the prime aspects projected to drive the Global Non-Hodgkin Lymphoma (NHL) Market through 2027. On the other hand, increasing treatment costs, especially across developing countries, are likely to hinder the growth of the global market in the years to come.

A. CAR T-cell therapies would create profitable prospects for the major companies in the Global Non-Hodgkin Lymphoma (NHL) Market through 2027.

A. Geographically, North America is likely to continue its dominance in the Non-Hodgkin Lymphoma (NHL) Market over the forecast years. 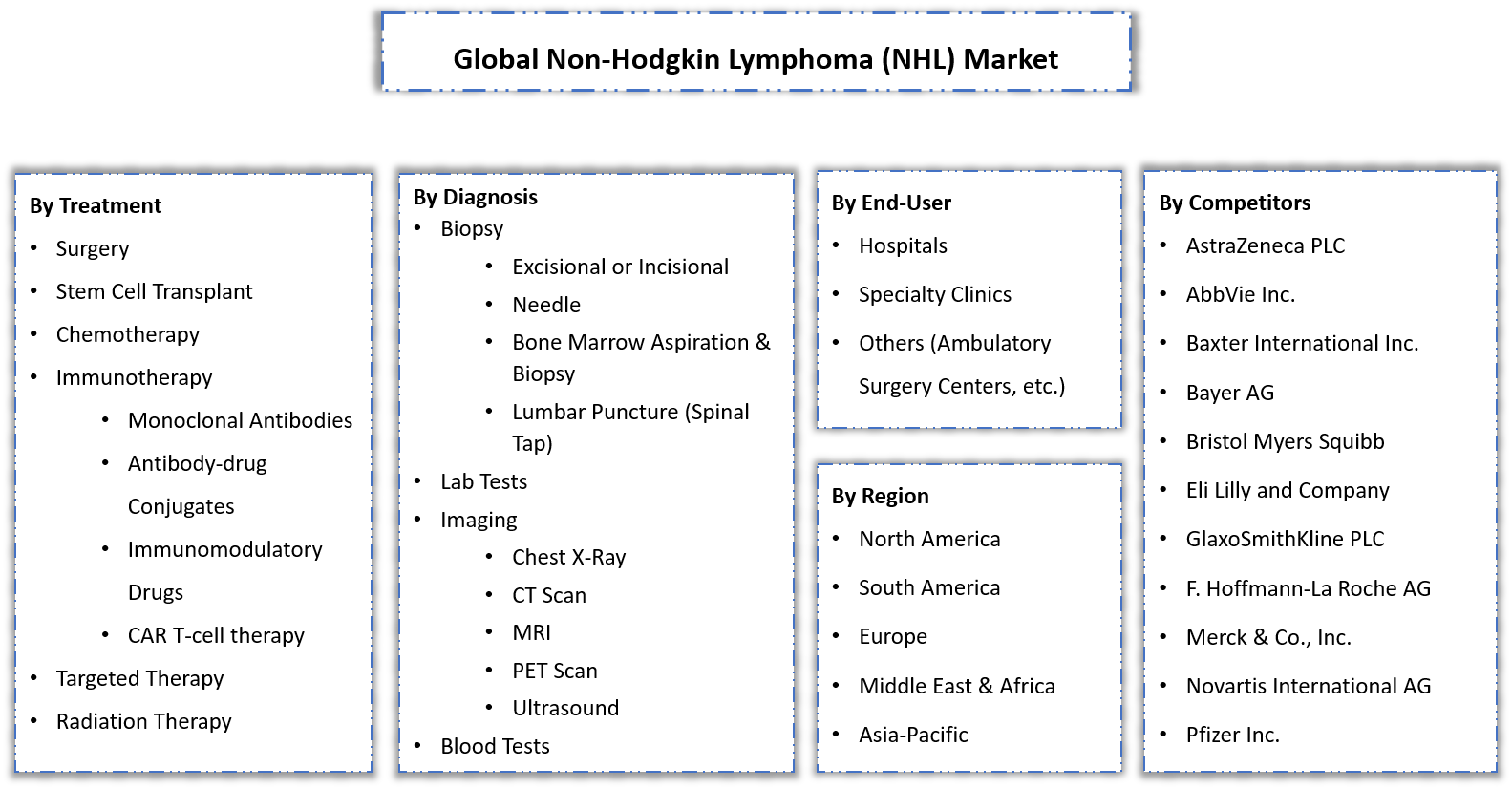