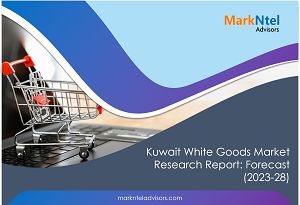 White goods are consumer durables that primarily include home electronic appliances. Radios and television (TV) sets, air conditioners (ACs), refrigerators, washing machines, and various others are some of the most popularly used white goods, offering a variety of purposes such as cooling, heating, cooking, and washing. These products are extensively available on the market and have a diverse range of uses in the commercial and residential sectors. Furthermore, one of the primary factors driving the market growth is the increased adoption of white goods across various industrial verticals such as healthcare and hospitality.

The Kuwait White Goods market is projected to grow at a CAGR of around 9.66% during the forecast period, 2023-28. The market saw consistent growth in the past years, owing to the rising sales of home appliances such as refrigerators, ovens, washing machines, etc., in the residential, commercial, and industrial sectors. Rapid urbanization, expanding housing projects, rise in per capita income, and growing preference of consumers to invest in labor-saving appliances to lessen their domestic tasks are some of the prominent factors driving the sales of white goods in the country. The surge in the construction of new hotels, restaurants, and public spaces, has also made a noticeable contribution to the demand for air conditioners, dishwashers, and cooking ranges, among others.

Moreover, the increasing development of healthcare infrastructures such as the Jahra Medical City and Maternity Hospital in Al-Sabah, the country reinforces the necessity for white goods like refrigerators, air conditioners, televisions, air purifiers, digital signage, etc. In addition, the growing import of meat & related products in Kuwait has certainly influenced the demand for refrigerators in cold storage warehouses to lower the rate of chemical changes & growth of microorganism enzymes in the food products till it reaches the final consumers. For instance:

Hence, this led to increased demand for compressor refrigerators, which were used in cold storage warehouses. Furthermore, the government is focused on diversifying its economy to reduce its reliance on oil, for which the government is impressively working to develop a global commercial hub in Kuwait. Consequently, leading to the construction of new offices, malls, complexes, etc., further strengthening the demand for white goods such as water dispensers, air conditioners, and vacuum cleaners, among others. Besides, continuous developments in white goods, like the integration of artificial intelligence in the products for better functioning & efficiency, have pushed customers to upgrade their white goods, thereby enhancing market sales.

The spike in the over-the-top platforms further encouraged the sales of desktops & laptops for media consumption. It prompted customers to upgrade their television sets to higher-resolution screens. The technological advances that led to the introduction of Smart TVs have also supported the sales of televisions. Along with this, the booming gaming industry led to a higher trade of gaming monitors as it provided customers with better features like higher refresh rates. As a result of rising technological innovations in white goods and growing commercial and residential adoption of labor-saving applications, the Kuwait White Goods market is expected to grow significantly in the coming years.

The government of Kuwait has set an ambitious target to provide housing to approximately two and a half million people by 2030. Under this, the government is actively engaged in developing smart cities & smart buildings to promote a sustainable lifestyle, and high standards of living, with low impact on the environment. For instance, in 2019, the Kuwait government approved the construction of the two largest smart cities, such as South Saad Al Abdullah & XZERO city. These would be developed by a Dubai-based developer URB on 16,000 hectares of land, which would provide residential units, jobs, and amenities to 1,00,000 people.

Further, with the growing construction of smart buildings, the demand for smart consumer durable goods such as ACs, air purifiers, etc., is anticipated to be trending and would positively affect the market growth in the upcoming years.

Above them all, smartphones held the major share of the Kuwait White Goods market in the historical years, and the same trend is anticipated to continue in the coming years. Access to high-end digitalized services such as payments, banking, etc., and the need to stay connected with others via social media & audio calls provided a lucrative growth opportunity for the Kuwait Smartphones market. Moreover, the affluent & luxurious lifestyle of the customers in Kuwait has certainly increased the demand for expensive iPhones & other smartphone brands like Samsung, Huawei, Xiaomi, Nokia, etc., further creating a demand for smartphones in the market.

The demand for updated smartphones seems to be perennial as customers are buying new phones almost every year to use the new features offered by smartphones as it is a high technology-driven market, which focuses on rapid technological innovation. Further, with the development of 5G services in the country, the demand for 5G smartphones is anticipated to rise. Hence, this would notably upsurge the share of smartphones in the Kuwait White Goods market in the upcoming years.

Based on Distribution Channels:

Here, the E-commerce section has been booming in historical years with a rise in sales through online sites such as Xcite, Lulu hypermarket, Amazon, and Best Al-Yousifi. The online platform provided transparency & convenience to the customers, which encouraged the users to buy via these channels. Further, the pandemic also stirred the trend of online shopping, which still lingers even post-COVID. The diverse portfolio offered by the e-commerce platforms predicts that customers would continue to prefer online platforms in the upcoming years, hence fueling the market of white goods in Kuwait.

Of all the regions across the country, Hawalli held the major market share owing to the presence of a significant number of residential houses & commercial spaces. The Hawalli region is considered the IT hub for Kuwait, due to which commercial offices are projected to be established in the region in the forecast years. These constructions would, in turn, spur the sales of white goods like air conditioners, microwave ovens, water dispensers, and vacuum cleaners in the upcoming years.

The Kuwait White Goods market gained significant growth during the historical period, with the surging construction of new commercial & residential properties like apartments, hotels, airports, hospitals, etc. The country has set its ambition to develop & modernize its infrastructure to improve the lifestyle of its residents. Government-sponsored affordable housing scheme for Kuwaiti citizens is one of the major factors for the construction of residential properties as the government has introduced several housing projects in collaboration with private entities to promote government-funded modernized houses. Therefore, the development of various residential & commercial projects would propel the demand for white goods, such as television, washing machines, refrigerator, microwave, etc., in the market.

Furthermore, Kuwait has been working to modernize its commercial infrastructure as part of its ‘Vision 2035’ to strengthen its hospitality sector. As part of the vision, the government has announced various projects in the commercial sector, including the construction of Terminal 4 of Kuwait International Airport and the development of Mubarak Al Kabeer Port, Sabah Al Ahmad Sea City. These projects consist of retail units, malls, entertainment venues, and cinemas in the country, hence assisting the growth of tourism within the country and would further drive the market growth during 2023-2028.

Possible Restraint: Decline in the Population of Migrants to Hinder the Market Growth

The decline in the migrant population of the country has marginally hindered the growth of the Kuwait White Goods market. According to the World Bank, Kuwait's net migration rate fell by around 10% between 2017 & 2022, from 14.5% to 4.4%, indicating a lower proclivity for Kuwait. The high cost of living, fewer job opportunities, extreme weather conditions, and government policies are the primary reasons for minimal migrants arriving in the country.

Additionally, the extreme climatic conditions & humidity and the high cost of residential properties, coinciding with the job losses during the COVID-19 pandemic, also dwindled the migrant population. Hence, this led to a slightly lowered demand for new residential property, further creating a challenge for white goods.

The rise in the government healthcare budget in Kuwait to boost the expansion of the hospital, clinics, and other medical facilities, would create an opportunity for the demand for white goods such as air purifiers, refrigerators, air conditioners, microwave ovens, etc. For instance:

Further, the Ministry of Health and the Ministry of Public Works announced an investment of nearly USD4.42 billion to expand nine operating hospitals within the next ten years. Therefore, this development is anticipated to escalate the demand for TVs, ACs, refrigerators, microwaves, washing machines, etc., in the country.

Thus, improving healthcare in the country is expected to create a conducive environment for the demand for white goods in the upcoming years, thereby positively impacting the growth of the market.

A. Smartphones is the leading type in the Kuwait White Goods Market during 2023-28.

A. The growing residential & commercial construction is anticipated to drive the Kuwait White Goods Market during 2023-28.

A. The rising development of smart buildings is the key trend that would shape the growth of the Kuwait White Goods Market during 2023-28.

A. The government’s support to develop healthcare infrastructure would prove to be an opportunity to drive the Kuwait White Goods Market through 2028. 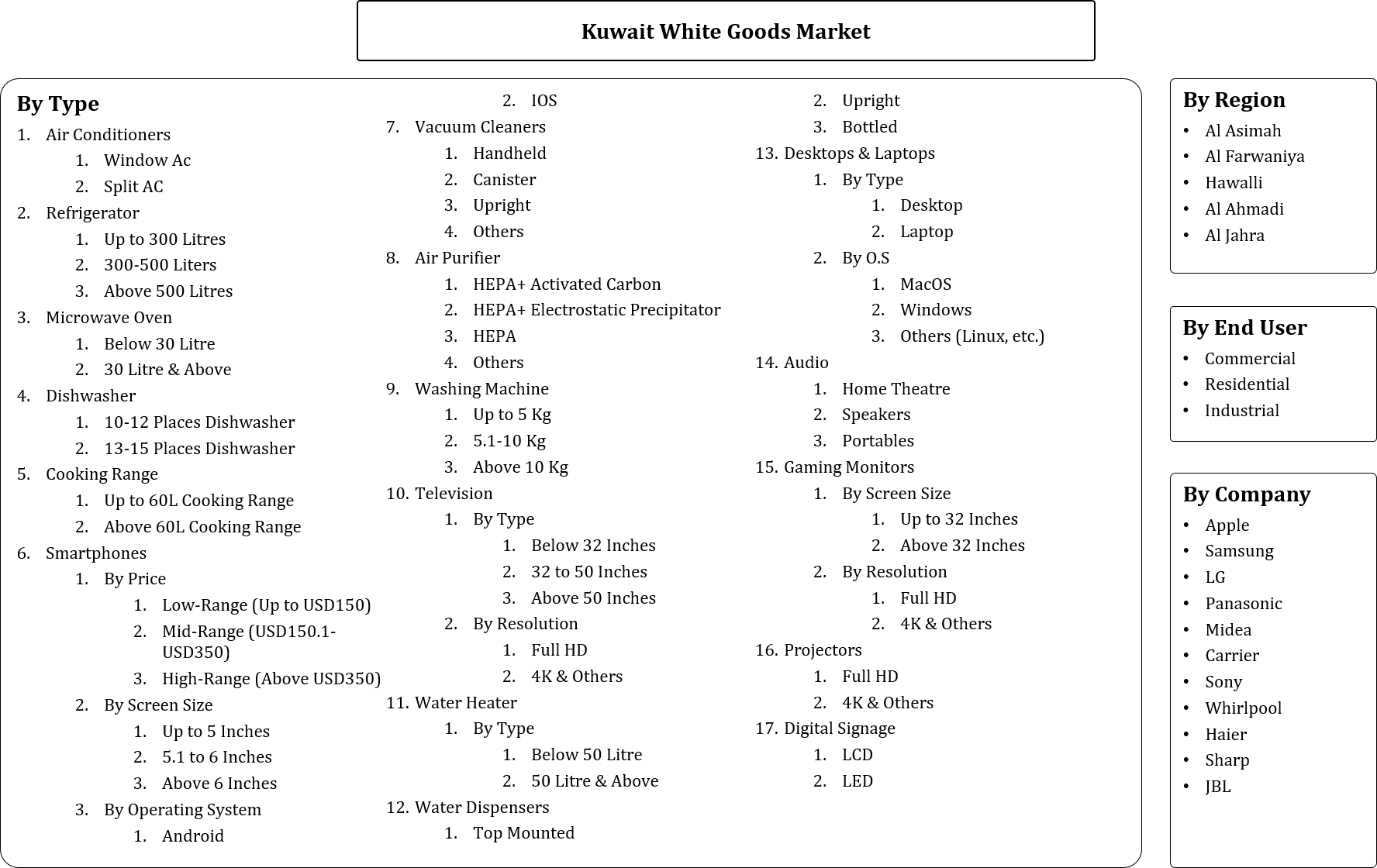