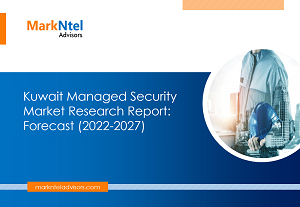 The Kuwait Managed Security Market is projected to grow at a CAGR of around 3.0% during the forecast period, i.e., 2022-27. Several organizations across Kuwait are seeking technologies in order to expand their business operations and enhance productivity & customer experience, and having a robust IT infrastructure has become paramount to achieve that.

Several organizations in Kuwait lack the resources required to opt for dedicated in-house IT teams, owing to their significantly high costs and an increasingly complex IT environment to manage. As a result, they are now more than ever looking at Managed Security Services as an alternative to effectively managing & expanding their IT infrastructures.

The growth of the managed security market in Kuwait is likely to be driven primarily by the ever-evolving needs of companies, both large enterprises & SMEs (Small & Medium-Sized Enterprises), especially those operating in the BFSI, manufacturing, healthcare, & retail sectors, to address the growing incidence of organized cyber-attacks in the country.

Moreover, the rampant cyber-attacks, as a result of feebly secured networks, demonstrate a dire need for enterprises to switch over to some reliable providers to outsource their security requirements. However, besides setting the stage for the key players to demonstrate their competence in the market, the latest trend pushes the service providers to upgrade their security systems & services to stay afloat in the competition. For instance:

Furthermore, telecom companies in Kuwait are collaborating with cloud & other IT firms like IBM, Infonet, & Cisco, among others, to integrate digital technologies into their business operations. With improved technological awareness, the country has started investing more in making its IT infrastructure more robust & efficient, which projects lucrative prospects for the managed security market in the coming years. 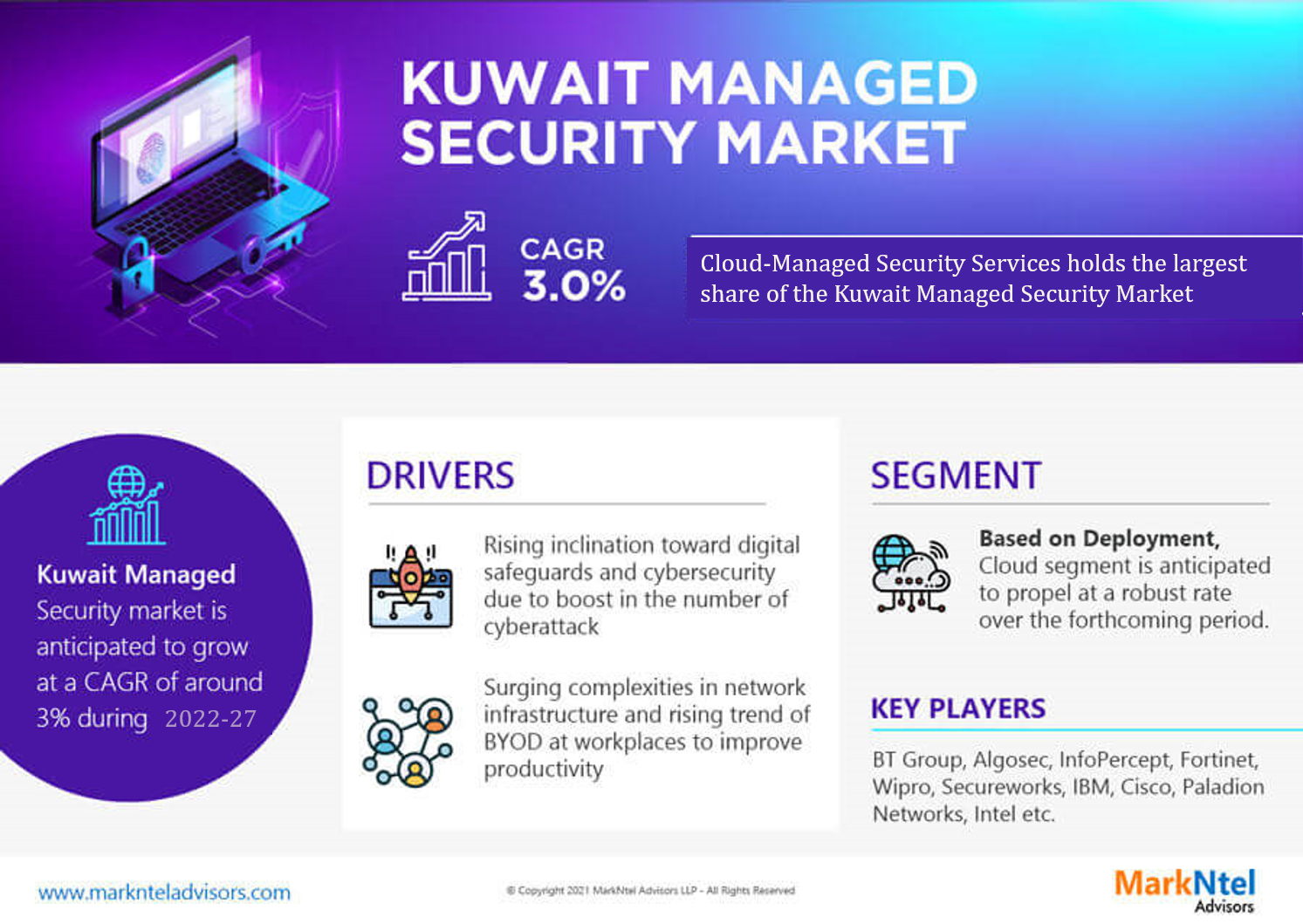 Based on Enterprise Size

Here, Small & Medium enterprises are anticipated to emerge as the fastest-growing segment in the Kuwait Managed Security Market in the projected time frame. This growth attributes to the rampant security threats & burgeoning investment by enterprises in strengthening the security system, giving rise to more small & medium businesses sourcing these services.

On top of it, the flexible pricing models offered by the service provider to enterprises have led to easy adoption of these services, further creating an opportunity for the competitors to retain their clients and set their strong foothold in Kuwait for the Managed Security Market.

Furthermore, the increasing cybercrime cases engulfing the entire country, rather than just its businesses, appears as a blessing in disguise for investors eager to capitalize on this unprecedented opportunity. For instance,

Based on Deployment Model

Here, Cloud-Managed Security Services holds the largest share of the Kuwait Managed Security Market. Such dominance can be attributed to its broad utility in terms of low cost, comprehensive access, pay-per-use model, and improved performance, and perhaps it is why cloud services are demonstrating massive adoption across the nation. For instance,

Despite its extreme adoption in data storage globally, when experiencing a security lack, the cloud leads to a severe crisis. Misconfigurations of the organizations’ cloud security are the reason behind most of the cyber threats. Hence, to prevent these attacks, it is vital to manage and configure them properly.

According to the Orca Security 2020 State of Public Cloud Security Report, 80.7% of organizations have at least one neglected, internet-facing workload, indicating that the operating system is unsupported or unpatched. For instance,

Based on End User

Here, the BFSI segment is anticipated to garner the largest revenue share in Kuwait Managed Security Market during the forecast period. With the government's initiative for a well-established & digitally controlled banking & financial platform, the BFSI sector is becoming online & benefiting consumers with ease of banking transactions, which, in turn, derives the need for safe & secure banking.

Moreover, in addition to the benefits & edges provided by the BFSI digital platform, it also poses a threat to the growth of malfunctioning, hacking, malware, & fraudulent activities involving sensitive customer bank account details and other vital information. These activities have increased over time, and as a result, there has been an increase in the deployment of the necessary web protection platform to safeguard the general interest of consumers, which is expected to propel Kuwait's managed security market in the forthcoming years.

One of the major drivers of managed security market growth is the significant rise in the number of cyber-attacks. In fact, during the COVID-19 pandemic, Kuwait experienced more than 1000 cyberattacks during the first half of 2020 alone, including spam attacks, breaches of corporate email addresses, malware, ransomware, and malicious domains. The market expansion can be attributed to a sudden shift in enterprise preference for the integration of advanced technologies such as cloud and IoT, the implementation of a cybersecurity framework to improve the banking sector's resilience to cyberattacks, as well as increased spending on IT infrastructure development.

Since small businesses lack the capital resources and skilled IT personnel to establish robust in-house network security, service providers keep coming up with resilient security service ideas to assist startups. Such aid to emerging businesses in strengthening their peripheries shall accelerate the growth of the managed security market over the forecast years.

A. ‘BFSI’ Segment is anticipated to emerge as an area of remunerative opportunities for the leading players in the Kuwait Managed Security Market during the forecast period.

A. Rapid Surge in Cyber-Attacks Cases Across Kuwait, a sudden shift in enterprise preference for the integration of advanced technologies such as cloud and IoT, the implementation of a cybersecurity framework to improve the banking sector's resilience to cyberattacks, as well as increased spending on IT infrastructure development are the factors driving the Kuwait Managed Security Market through 2027.

A. The leading players in the market during 2022-27, are BT Group, Algosec, InfoPercept, Fortinet, Wipro, Secureworks, IBM, Cisco, Paladion Networks, Intel, Others.

A. Aid to emerging businesses in strengthening their peripheries emerges as an area of lucrative opportunities across the nation through 2027.