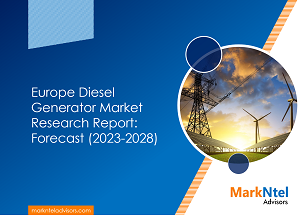 A diesel generator is the combination of a diesel engine with an electric generator to generate electrical energy. The main components of diesel generators include a diesel engine, an AC alternator, a fuel tank, a control panel, & radiator. These generators are used either as a power backup system or as a prime electricity source. Further, they are essential for a continuous & uninterrupted supply of electricity, thus the demand for diesel generators witnessed significant growth among the residential, commercial, and industrial sectors of Europe. The need for diesel generators in Europe arises either as a backup source, as the region has nearly 100% access to electrification or as the prime source in new construction projects.

The Europe Diesel Generator market is projected to grow at a CAGR of around 6.57% during the forecast period, i.e., 2023-28. The demand is driven by the presence of a large number of energy-intensive industries such as mining, manufacturing, construction, etc. Also, governments are continuously involved in expanding the industrial sector of the region as the sector contributes highly to European exports. According to the Federal Ministry of Economic Affairs and Climate Action, European Union (EU), the industrial sector accounts for 83% of EU exports and more than 30 million jobs. Thus, the industrial expansion owing to government efforts to strengthen their economies is projected to drive market growth in the upcoming years.

Furthermore, the region is witnessing a surge in the number of data centers as a result of the growth of internet activity & the entire industry associated with it, particularly in countries such as the UK & Germany, fueling demand for diesel generators in the region. For instance:

Additionally, the rising number of commercial spaces, which are expected to complete in the upcoming years, is widening the market for diesel generators, affecting the market positively.

The European region is highly dependent on Russia & Ukraine for the energy supply. Forty percent of Europe’s gas comes from Russia, including Yamal-Europe, crossing from Belarus to Poland to Germany & Nord Stream, which goes directly to Germany. However, in 2021, Ukraine became the transit corridor for gas supplies to Slovakia, Austria, and Italy.

The outbreak of war disrupted the energy supply in Europe as the Nord Stream, a 1,200 km gas pipeline under the Baltic Sea, remained non-operational since 2021, as Russia closed it down for maintenance work & the war has worsened the situation. This has impacted the availability of fuel in the region, limiting the availability of diesel and impacting the demand for diesel generators negatively.

However, power plants across Ukraine have been impacted from the capital Kyiv to Odesa in the south & Vinnytsia in the west. In response to this, the European Union has given money to buy equipment such as generators & power cables to restore power supplies through the Ukraine Energy Support Fund.

European countries are witnessing the use of diesel generators in the wind-diesel microgrid. This adoption is attributable to the potential of hybrid diesel-wind power generation systems in providing the energy supply for remote communities & facilities. Compared to the traditional diesel system, hybrid power plants can offer many advantages such as additional capacity, being more environmentally friendly, potential reduction of cost, etc.

The countries with high potential for wind energy, such as Germany & Norway, are exploring options to establish such systems. Moreover, Russia is increasingly making efforts to provide the energy supply in the far north region of the country, resulting in the establishment of such microgrids. For instance:

Based on KVA Rating:

Moreover, rising government initiatives & investments, such as the UAE-Turkey collaboration, to expand the industrial sector of the region, especially in countries such as the UK & Turkey, are expected to escalate the demand for diesel generators in the region in the upcoming years.

Of all the countries, Russia witnessed considerable growth in the Europe Diesel Generator market during the historical period. The major demand for these generators in the country arises from the rising mining operations in Russia as the country is continuously engaged in exploring new sites for mining, especially in northern Russia. The country has one of the largest mineral industries in the world & exports a significant quantity of minerals globally.

Diesel Gensets are necessary to operate the mining units located in the remote parts of the country where the power supply is limited. Hence, with the growth of the mining sector, the demand for diesel gensets in the country is expected to witness expansion, thus driving the Diesel Generator set market in Russia during the forecast period.

The rising environmental concern of economies due to climate change is restraining the market growth of the Europe Diesel Generator market. The countries present in the region are actively taking initiatives to reduce their carbon emissions to achieve net neutrality, which is threatening the market for diesel generators. For instance:

Moreover, the inclination to generate electricity from renewable sources & phasing out of conventional sources is negatively impacting the Diesel Generator market. For instance, according to the World Economic Forum, in 2020, Sweden, Finland, Latvia, Austria, and Portugal generated more than a third of their electricity from renewable sources. Hence, rising environmental awareness & resulting green initiatives are possible restraints in the path of revenue generation in the Europe Diesel Generator market.

A. The industrial sector is the leading end-user for the growth of the Europe Diesel Generator Market during 2023-2028.

A. The burgeoning manufacturing industry is the prominent factor that is expected to drive the Europe Diesel Generator Market in the coming years.

A. The emerging use of diesel generators in the wind-diesel microgrid war is the key trend shaping the growth of the Europe Diesel Generator Market during 2023-2028.

A. The country’s target to achieve carbon neutrality by 2030 is a possible restraint affecting the growth of the Europe Diesel Generator Market during 2023-28. 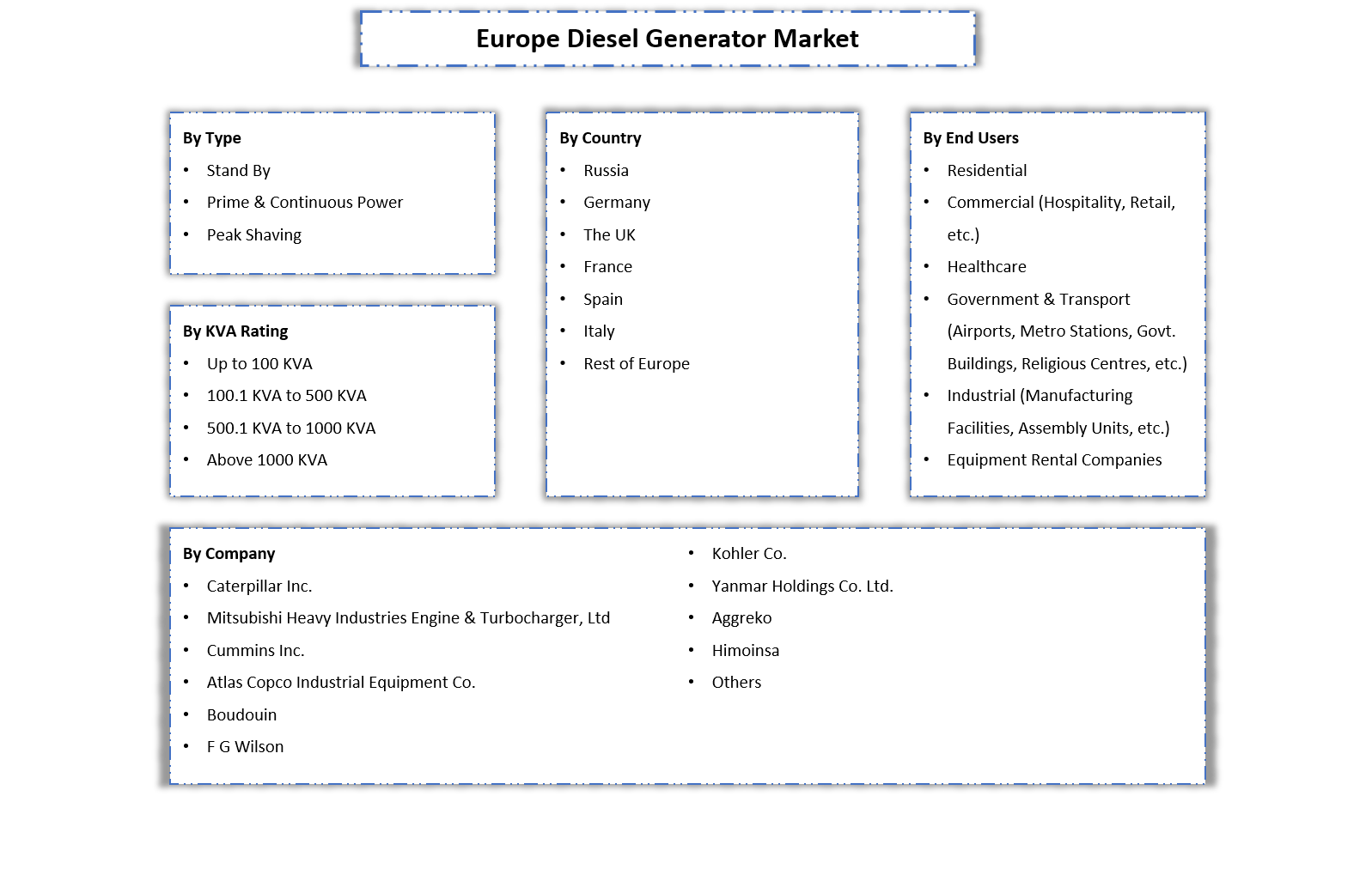