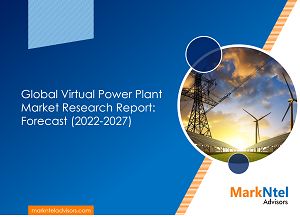 A Virtual Power Plant is a cloud-based network of decentralized power generation units like solar plants, wind farms, storage systems, among others, used for releasing the lad from the grid by swiftly dispensing off the power generated by the units during peak load. These power production units are governed in their process & possession through the virtual power plant.

The Global Virtual Power Plant Market is projected to grow at a CAGR of around 27% during the forecast period, i.e., 2022-27. The market is driven primarily by the mounting demand for power generation from renewable energy sources, coupled with an essential concern for decentralized power generators in the electricity distribution supply chain to balance energy production & consumption levels.

In July 2021, Tesla announced a plan to use its Powerwall integrated battery system across California as part of a Virtual Power Plant to back the electric grid at times of high temperatures. Besides, the leader is experienced in networking with Virtual Power plants and has deployed around 10% of these units across South Australian plants. This plant has played a crucial role in supporting broader power grids during critical events.

Moreover, the Tesla Powerwall battery system is likely to join the movement to build Virtual Power plants across California with distributed generation technology for residential energy storage and stabilizing the power grids.

Impact of Covid-19 on the Global Virtual Power Plant Market

The Covid-19 pandemic in 2020 catastrophically affected most industries worldwide. However, the Global Virtual Power Plant Market did not observe any direct impact. Due to the severe economic downfalls across different countries, investments in the Virtual Power Plant industry underwent a temporary halt. Several countries across Europe had lowered funding in the IT infrastructure, which consequently brought a pause in technological innovations in the market.

Since most countries imposed stringent movement restrictions & lockdowns to curb the virus spread, investments in multiple grid projects also witnessed an unprecedented decline. On the bright side, some countries also took initiatives in reducing the burden of energy generation. For instance:

Furthermore, with the gradual improvement in the pandemic situation, the governments of different countries are swiftly increasing investments in multiple verticals to enhance their national economy, stressing more on national budgets, and reconsidering transitions on renewable energy resources, among others. Hence, the Global Virtual Power Plant Market would gain significant momentum owing to the massive funding in developing energy infrastructure across developing nations in the years to come.