The Middle East Vegetable Oil Market is projected to grow at a CAGR of around 2.85% in terms of quantity sold during the forecast period of 2022-27, says MarkNtel Advisors in their recent research report. The Middle East has seen an escalating growth in the tourism sector in recent years that has proliferated the number of hotels to cater to the rising tourists in the countries. The countries in the Middle East, like the UAE, Saudi Arabia, Qatar, etc., host several events such as Dubai Expo 2021, FIFA World Cup 2022, etc., which has positively impacted the arrival of new hotels in the countries.

Thus, this has become a significant driving force for the growth of the Vegetable Oil market in the Middle East. Furthermore, the rising focus of the governments to attract tourists is projected to strongly contribute to the demand for vegetable oil in the years to come. In 2019, Riyadh launched a new tourist e-visa process to entice non-Muslim visitors. They aimed to attract 100 million tourists in 2021 & increase the number of religious visitors from nearly 17 million to 30 million by 2025.

Additionally, due to increased awareness about the health benefits of vegetable oils, such as preventing vitamin deficiency, lowering blood pressure, etc., the Middle East Vegetable Oil market has seen notable demand for vegetable oils such as palm oil, olive oil, and others, over the last few years. Apart from that, the rising popularity of palm oil has prompted companies such as Savola Group to increase palm oil imports into the Middle Eastern countries such as the UAE & Saudi Arabia in the past year.

Moreover, the demand for vegetable oil has increased considerably due to the growing number of food outlets in the Middle East region. In 2021, the food outlet observed growth of nearly 50% in Dubai. This was due to the rising presence of customers in large numbers, supported by high income, a surging influx of tourists, and the escalating growth of food delivery options in the region. Thus, the increasing food outlet supported by high nutritional food value contributed to the significant demand for vegetable oil in the region. 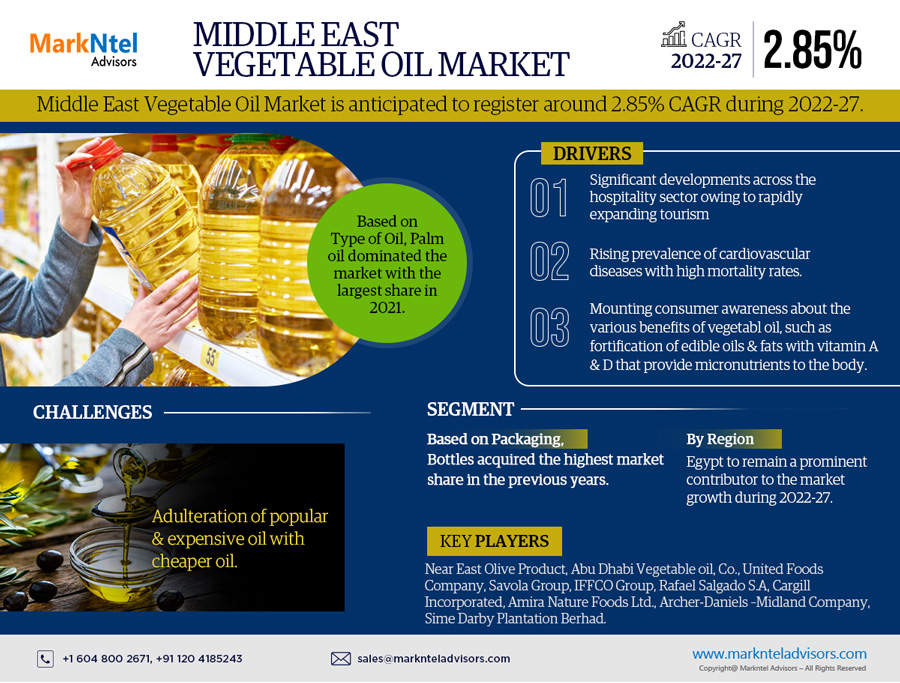 Based on applications, the market bifurcates into Food, Feed, and Industrial. Of them the Food application witnessed the highest market growth in 2021, owing to the rapid urbanization & consumption of unhealthy foods that resulted in an increase in obesity rates & cardiovascular diseases in the Middle East. The food industry of Middle Eastern countries has been using vegetable oils such as soybean, sesame, and mustard oils extensively for the past few years, owing to the increase in the number of restaurants, the expansion of food outlets, and the launch of food delivery apps, which have made delivering food from restaurants to homes easier in countries such as Saudi Arabia, the UAE, etc.

In addition, the large number of affluent lifestyle users in the countries has led to the opening of luxurious restaurants. Thus, the varied multi-cuisine menu of restaurants, hotels, etc., would escalate the demand for vegetable oil in the coming years. In 2022, Saudi Arabia’s seafood restaurant Shrimp Nation opened its first branch in the UAE, with an investment of around USD2.72 million.

Geographically, Egypt captured a considerable market share of around 30% in the Middle East Vegetable Oil market in 2021. The rising tourism sector has positively impacted the hospitality industry in the country, which led to the establishment of new hotels & restaurants. Hence, this resulted in a strong contribution to the growth of the Vegetable Oil market during the historical period.