The Middle East & Africa Organic Packaged Food market is projected to grow at a CAGR of around 5.75% during the forecast period of 2022-27, says MarkNtel Advisors in their recent research report. The Organic Packaged Food market in the Middle East & Africa is consistently growing, owing to numerous factors like rising health concerns among the citizens & the growing number of diseases in the region. Hence, the rising inclination of the population toward a healthy diet with required nutrients is helping organic food gain popularity in the region.

In addition, the rising per capita income of the individuals is allowing them to spend on their diet to boost their immunity & maintain their health. Furthermore, to cater to the rising demand for organic food in the region, the government has also taken various initiatives to enhance the production of organic food in the country. Hence, these factors have accelerated the growth of organic packaged food in the Middle East & Africa region.

Moreover, the launch of new organic products such as snacks & drinks with a variety of flavors is attracting the customers & allowing them to choose as per their needs. Hence, these factors would propel the market growth during the forecast period. 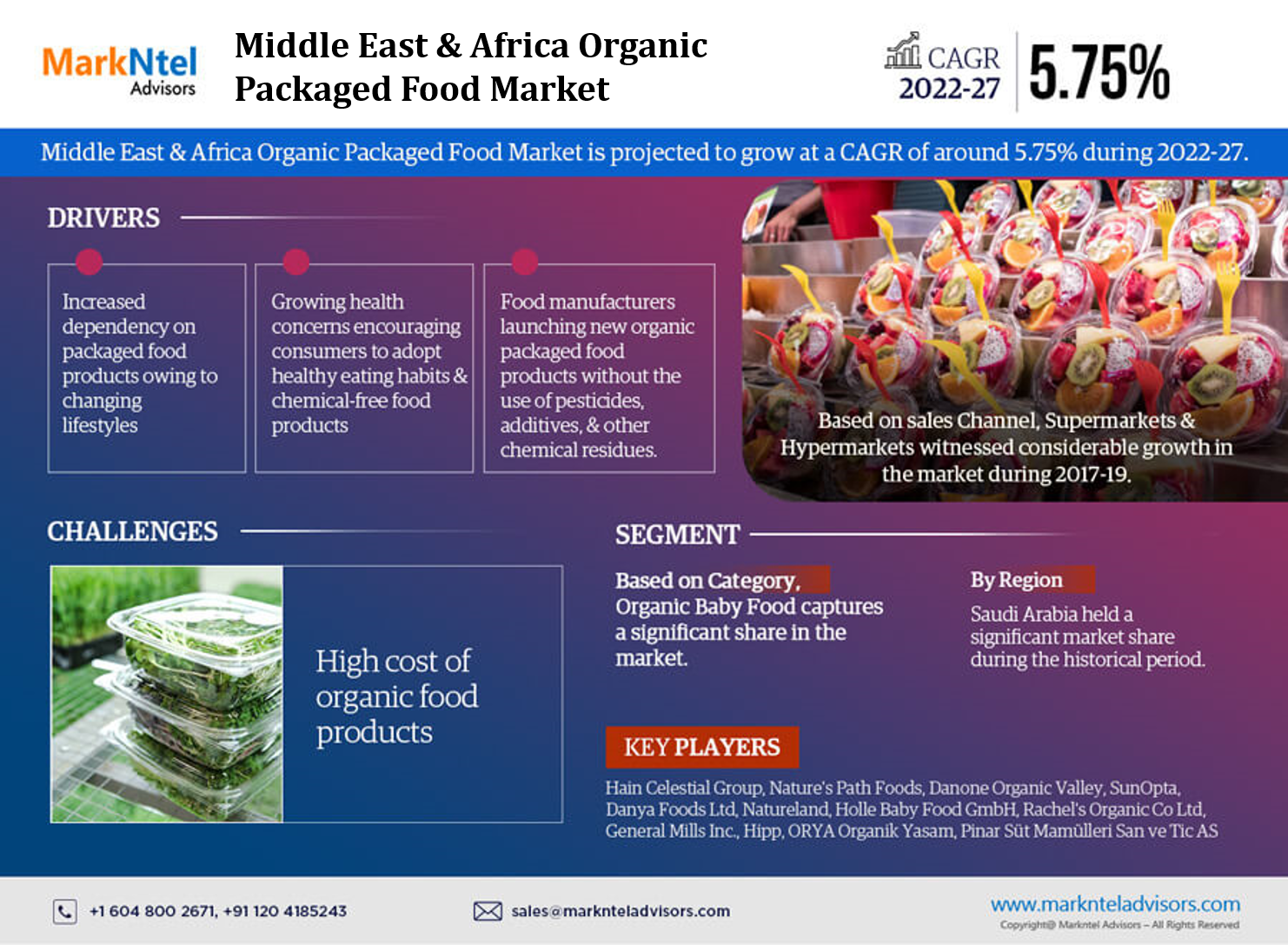 Furthermore, the growing population of working women in countries such as the UAE, South Africa, and others has accelerated the demand for organic packaged food products in the region, as their hectic lifestyles leave them with little time, increasing their reliance on organic packaged food for a healthy diet for their children. Therefore, these factors have helped the Organic Baby Food Market gain traction in recent years.

Based on sales channels, the market is divided into Conventional Retail Outlets, Hypermarkets, Supermarkets, and Others. Among them, the Supermarket & Hypermarket dominated the Organic Packaged Food market during the historical period, 2017-19. Furthermore, hypermarkets & supermarkets offer a wide range of organic food brands with ample product availability & various lucrative discounts, resulting in consumer preference for the respective distribution channel. Furthermore, the opening of new physical outlets has been witnessed in various Middle Eastern & African countries due to the increasing demand for organic packaged food from hypermarkets & supermarkets. Besides, the increase in the number of large retail outlets would help the segment retain its major market share for the sales of Organic Packaged Food in the region. Hence, these factors would further escalate the demand for organic packaged food through the retail platform of sales channel in the forecast period.

Geographically, Saudi Arabia has fueled the growth of the Organic Packaged Food market, owing to the increasing adult & expatriate population & growing health consciousness among the citizens. Moreover, the government's initiative to boost the organic food production in the country to reduce dependency on the European & Western countries is helping the farmers to shift to organic farming. Furthermore, the changing lifestyle & preference for a healthy diet among the customers have helped the Saudi Arabia market to witness significant growth in recent years, reveals MarkNtel Advisors in their research report, "Middle East & Africa Organic Packaged Food Market Analysis, 2022-2027."