The Middle East and North Africa Thermal Camera Market is expected to grow at a CAGR of around 13% in the forecast period of 2021-26, says MarkNtel Advisors in their research report. The market growth attributes principally to the increasing demand for thermal cameras for security purposes, the surging adoption of advanced technologies by manufacturers, and the rising use of thermal cameras in vision-based applications.

Thermal cameras are highly beneficial in dark environments. They use infrared radiations to form the image of an object. Increasing demand for autonomous vehicles and mounting concerns over road safety are other crucial factors fueling the overall market growth.

Moreover, the surge in technological advancements in surveillance technology is positively influencing the growth of the Thermal Camera Market across the Middle East & North Africa. Thermal cameras are being deployed largely across several verticals, including healthcare, industrial, military & defense, automotive, etc. This wide range of applications of thermal cameras across various end-users is projected to escalate the market growth in the coming years.

Despite numerous benefits of thermal imaging, there are a few challenges, including lack of awareness & accuracy, which could hinder the market growth. However, technological innovations by the leading manufacturers of thermal cameras are expected to provide numerous growth opportunities to the market during the forecast period, further states the research report, “Middle East and North Africa Thermal Camera Market Analysis, 2021.” 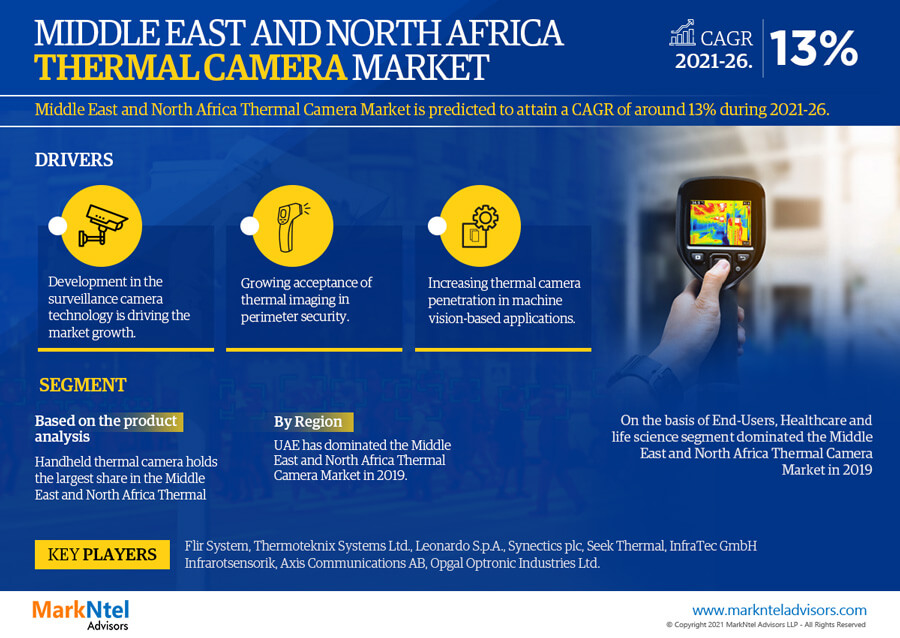 Thermal cameras are being used widely for security & surveillance purposes, owing to their capability to create an image even in extreme conditions like total darkness, smoke, fog, etc. The mounting tourism and growing urbanization across the region have propelled the need to install thermal cameras at various places like airports, malls, etc., to ensure public safety.

Furthermore, thermal cameras are being used extensively for search & rescue applications by individuals like military professionals & firefighters involved in critical & challenging jobs. Since thermal cameras can cover a large area in any condition, they help protect victims from any danger.

UAE accounted for the largest share in the Middle East & North Africa Thermal Camera Market. The primary factor propelling the demand for thermal cameras in the country is its flourishing tourism industry, coupled with mounting government initiatives to promote UAE as the hub of business & trade. Along with the increasing number of travelers, the need for improved security has also surged, which, in turn, has infused the deployment of thermal cameras at several public places, including metros, malls, airports, etc.

Moreover, thermal cameras help curb the spread of disease by monitoring the temperature levels of individuals. Hence, the need for installing thermal cameras at public places across the UAE is also increasing due to the rising severity of the coronavirus pandemic in the country, reveals MarkNtel Advisors in their research report, “Middle East and North Africa Thermal Camera Market Analysis, 2021.”